Mr. ThreeYear, apart from increasing the height and attractiveness genes of my children (thanks, honey!), is one-half of the brains behind our location independence plan. He also has an incredible story of growing up in difficult circumstances and working very hard to make a better life for himself. 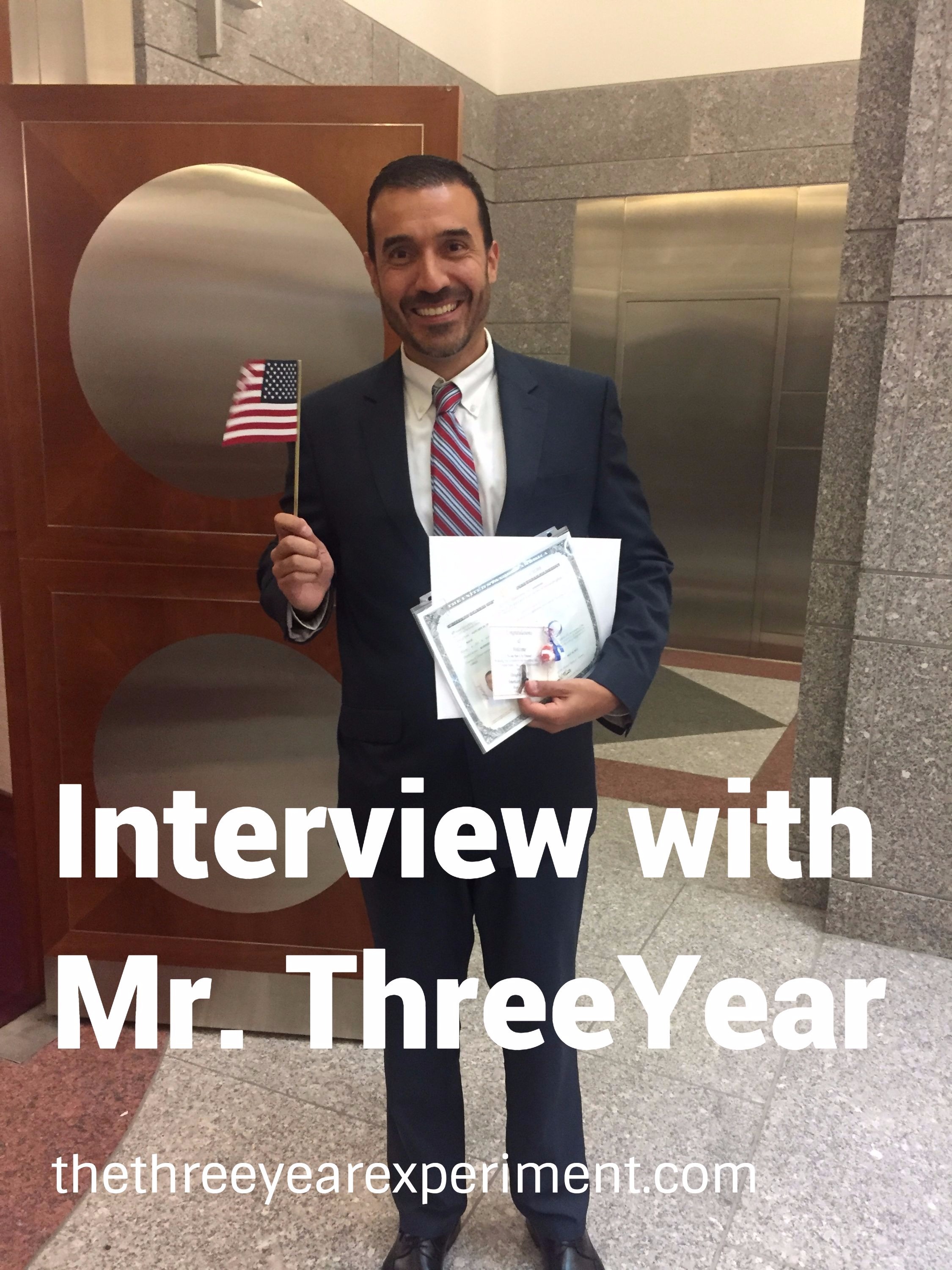 Since normally, I write the blog and Mr. ThreeYear just reads it, I thought I’d turn the reins over to him and allow him to share his thoughts on location independence, overcoming obstacles, and reaching financial independence.

Can you tell everyone a little about your background?

I was born in Santiago, Chile, in the mid-seventies. I grew up under the dictatorship of Augusto Pinochet. Our family was not really political; however, it was clear to see that it was not a smart idea to publicly oppose the government because of the consequences it would bring to your family.

I was the youngest of four siblings. I have two much older sisters who married and left the house early. My brother was also older, by eleven years. We lived right next to my grandmother. The country was very economically depressed. It was hard to get jobs. Unfortunately, my dad was getting nevada unemployment for a long time, which made my mom the main breadwinner, working three jobs at a time (she was a special education teacher). We never starved, but it was clear to me that we were at the lower end of the financial spectrum.

For example, our Christmases were very conservative. Everybody got a present, only one. They usually were socks or underwear or deodorant. We had a Christmas tree and we made some Christmas food, like maybe a fruitcake, sometimes. And we usually got a barbecued chicken, some salad, and a one-liter Coke for five people to share.

What was the hardest thing you’ve ever experienced?

The death of my father. I was thirteen years old, and my father got sick very quickly. He started losing his balance, and it was discovered that he had a brain tumor. With the little resources that we had, we went to the hospital that we could afford, and he went into surgery. They successfully removed the tumor but then he fell into a coma, and shortly after that, there was brain death. I had the chance to visit him at the hospital while he was unconscious, but he was full of tubes, and it was very shocking for me to see. I was only able to be there for a few minutes before I left, crying.

It was a pretty crazy time for everyone in my family. Everyone took care of their own grieving. There was no sharing, there was not so much talking about it. I pretty much lived with my grandma, my brother, and my mom. When you go through the whole grieving process, not knowing you’re going through it or without anybody to help you through it, it hurts and it really sucks because you yourself may be the target of frustration from other people around you.

During all this, I was in eighth grade, and because everybody was otherwise occupied by what was going on, we forgot that I needed to enroll in high school. As a last resort, my oldest sister helped me to interview in a couple of high schools. It was late in the year so I was on waiting lists everywhere. I ended up in a high school close by home, which was a very different environment from the Catholic school where I’d gone to elementary and middle school. It was a place for the tough crowd [Mrs. ThreeYear: Mr. ThreeYear grew up in a working class neighborhood in Santiago]. I was fourteen with classmates who were nineteen. There were fights everyday. People used to smoke during breaks. John Hughes would have loved this school.

After a year there, I realized if I wanted to be anyone, I needed to get out of there. So I looked for another public school in a much better district, about an hour away from my house. I first went by myself to beg them to let me in, and I talked to the counselor, and explained my situation. I asked her what I needed to do to enroll. I came back home and I asked my uncle to come with me so he could sign the paperwork. I needed an adult because my mom was working. So we went back to the school, and they were able to enroll me. I started my new school, which ended up being my high school for the last three years.

What do you think it taught you?

Life is not fair. People say that money can’t buy you happiness, but it can give you choices. It can protect you.

Going back to John Hughes, with Pretty in Pink, Sixteen Candles… the ’80s movies had a huge impact on me, because those movies were about a struggling poor kid who broke through and made it. I was always very in tune with the American way of life, with this sense of the American dream, that anyone could make it. I knew Chile was not going to give me that, because the social umbrella was different [people are very class conscious in Chile, and “Where are you from?” is one of the first questions people ask to gauge that status].

What has been important in achieving what you’ve achieved in your adult life?

Networking. Being able to relate to everybody. Being emotionally in tune with what’s going on in your life. And marrying you, Mrs. ThreeYear, because you believed in me [Awww]. Marrying you was one of the smartest decisions I made [I think he’s only joking that it was for the Green Card…].

I finished high school, then studied communications. I graduated, worked as a translator for a couple of years, then went back to grad school, and got a degree in International Relations. My mom mainly paid for college, and I worked during summers to help, and I paid for grad school from my earnings in my first jobs.

Then, I switched gears and I studied information technology for a couple of years, and got an internship in the US. I lived in San Diego, California, which is the most wonderful place in the world, for two years. And then I went back to Chile, when the internship was over.

That’s when I met Mrs. ThreeYear. That coincided with me getting a job with an ivy league school that had opened an office in Santiago. I managed the international student program. I gained access to a whole different strata, with that job, which has strengthened my network.

After dating for a few years, Mrs. ThreeYear and I decided we should tie the knot. We decided that we wanted to start life in the US, so I left my job, my country, my family, and my friends, and we moved in with my in-laws. I was able to quickly get a job with a Fortune 50 company in Atlanta, and we moved there after two months.

We lived in Atlanta for six years, and bought our first house, had our first child, which was the most wonderful thing ever, and were hit by one of the biggest recessions in the US. After experiencing multiple lay offs, and seeing how predatory corporate environments could be, I decided that I needed to look for a different type of company, which was aligned more with my values. My current company and I found each other in 2010, and moved to New Hampshire, where our second son was born.

We have been here since then, and I have been able to develop a career and a name for myself and be part of a fantastic company that has believed in me and given me the opportunity to grow as a professional, which I’m extremely grateful for.

Would you do anything differently?

What excites you about our plan to become location independent in three years?

To stop hearing you complain about the weather. [Eh-hem!] Independence. The freedom to be anywhere. Being closer to family and friends.

The lack of stability. The US has a great health system and education system, if you can afford it, and if you have good insurance. If not, it becomes a great concern.

Do you think we can do it?

Yes, I think so. I think that when we get to the place where we are financially stable, we can pull the trigger.

For me, it’s about being able to have health insurance and education covered for my family, the investments to pay for travel. I think it would mean very little anxiety. A life where we can choose what we want to do, versus feeling locked in to our jobs.

What’s your favorite part of travel?

Meeting new people, learning about new cultures, trying new foods. One of the best parts of our Southeast Asia trip a few years ago was the street food. We rented this AirBnB in a good, non-touristy part of town, and we had a ten-walk block to the Skytrain (subway). There were tons of amazing restaurants out in the open, and we’d order delicious food that was so cheap–$2.00 for both Mrs. ThreeYear and me, including drinks. They also sold delicious coconut pancakes that I still dream about.

I try to keep myself up-to-date with industry trends. I force myself to be in uncomfortable situations so I can learn, like taking new roles, stretching myself, stepping out of my comfort zone.

What do you think about the blog?

I think it’s a fantastic tool to keep ourselves on track and keep ourselves accountable for our plan. It’s a great way to share our experiences and learn from others.

Thanks so much, Mr. ThreeYear, for sharing your story and thoughts with us. Readers, if you have any questions for Mr. ThreeYear, he’ll respond in the comments!

4 thoughts on “Interview with Mr. ThreeYear”