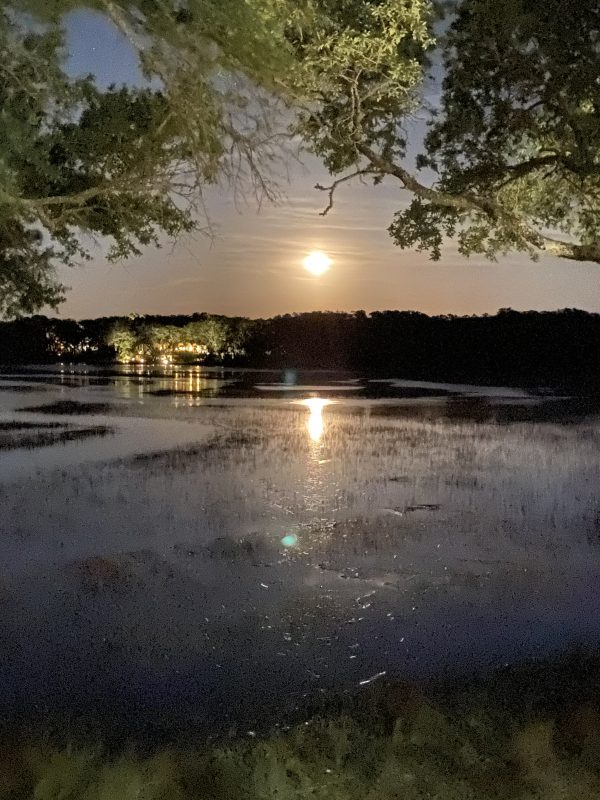 Oh, good. My site’s still here. As I logged on, I wondered for a second, since it’s been so long since I posted.

My family spent last week at the beach for Spring Break. I realize how incredibly fortunate we are to have that house to visit, to have a different view for a couple of days, and to be able to visit the beach. Still, we had planned to be in Spain, and I had a few moments of mourning that trip.

Your feelings are your feelings, as selfish or ungrateful as they feel, no? I read an article (I’ve read many over the past several weeks) explaining the unsettledness we feel as grief. Grief for a future that seemed more certain, grief for what we’d planned and didn’t come to pass.

Despite the fact that Netflix had a documentary called Pandemic, despite the fact that we’ve dealt with such contagions in the recent past, there was no way to predict the drastic turn our year would take, no way to guess that unemployment in this country would reach 10% and counting, that the stock market would plunge so quickly.

There are people out there who may later claim they predicted this event, that they knew a big, world-altering event was on the horizon. But they’re lying to themselves. There was no way to foresee the particular confluence of events that made 6 billion people stay home, that caused Italy and Spain to be epicenters of the pandemic, that meant that graduations would be cancelled for thousands if not millions of seniors in high school and college.

The future is inherently unpredictable. That is why thoughts of the future can bring both wonder and dread.

Where does that leave the ThreeYears, since the blog has always been about our family’s particular journey to location and financial independence?

I’ll admit, there are times during the epidemic that I’ve allowed myself to feel smug. That sounds so callous, and I suppose it is. I certainly don’t mean that I feel anything but deep regret and sadness for people who are sick or attending those who are sick, scared and unsure for friends or family who are facing financial uncertainty. I have felt and continue to feel all of those things.

My heart hurts for my friend who is about to give birth whose husband’s days have been cut at work. I worry constantly about my friend who is an ER doctor and has to go in to work and be exposed to this virus repeatedly. I feel more general sadness for people whose futures are uncertain and face more uncertainty every day as companies shrink or close.

What I have felt, I suppose it’s more accurate to call it, is gratitude towards the two people who faced the Great Recession in 2008. I am grateful for the lessons they learned, for the choices they made as a result. It means that now, as they face another Black Swan Event, they are much better prepared financially.

Those two people had a young child, just eighteen months old, when Mr. ThreeYear was laid off the first time. And that child was not two and a half when Mr. ThreeYear was laid off the second time. Those two people had credit card debt, car payments, a lifestyle they couldn’t afford, very little equity in their homes, and little understanding of how to create and maintain wealth.

The people our past selves have turned into have spent the succeeding twelve years making decisions that have put us on very different financial footing than we had then. Does that mean we don’t face anxiety and uncertainty about the future? Of course not. But it means we face much less than we did in 2008, when we tiptoed precariously close to the edge of our financial means, and the swift and insistent winds of the Housing Bubble Crash threatened to blow us over the edge.

Now we sit far from the edge of our financial means. There’s a wide safety barrier that has taken the better part of 12 years to erect, and I feel gratitude for that barrier, and for the small measures of security it has brought during these tough times.

Why did I say I felt smug? Honestly, sometimes it feels trying to watch those around me enjoy lavish lifestyles and feel like some of the few who practice restraint. “Are we overly cautious,” I’ve found myself thinking, “missing out on the better parts of life while we’re young only to retire with more money than we’ll ever be able to spend later?” What a nice problem that would be, no?

I don’t know if you’ve ever felt frustrated when it seems like you’re making good money choices, and watch others spend unrestrainedly with seemingly no consequences, but I have. Spending less than you earn is such an exercise in delayed gratification that you have plenty of time to doubt your choices along the way.

So I spent a few minutes patting myself on the back for all those years of delayed gratification that have helped us sleep a little better during these times. And having the ability to give to those family members and charities who’ve needed extra help in the past few weeks has been a really nice feeling.

Now that the stock market’s picked up slightly, the ThreeYears are 94% of the way to our goal of doubling our net worth we started with back in 2017. I was aiming to get there at the end of 2019, and I think we would have if we hadn’t moved, but it has been worth it. It has been so worth it, especially now.

Honestly, if I had to be stuck in New Hampshire in a quarantine during these, the bleakest and most endless months of the year, there’s no telling what would have happened. Instead, we get to take walks amidst yards riotous with bloom. We enjoy weather in the 60s and 70s and get tanned on the beach in April.

This quarantine has been a good reminder to practice gratitude. Life is slower, and these rhythms have given me time to pick up my journal and record my blessings, instead of focusing on what we don’t have or looking at what others do.

Parts are hard–teaching online with so many preps and different levels to grade has been killer–but I keep taking it day by day, week by week.

How are things with you? I’d love to hear from you.