If you’re just joining, our family of four is on a three-year journey to double our net worth and become location independent. Each month, I record our progress on our net worth and our spending (gulp!). This year, we’ve got some major goals, including paying off our outstanding debt (car and apartment in Chile), replacing our roof, AND saving around $70,000. As of September, we were roughly 22% of the way to doubling our net worth.

October is gone! Stick season is here! Run for the hills! Oh wait, I live in the hills… 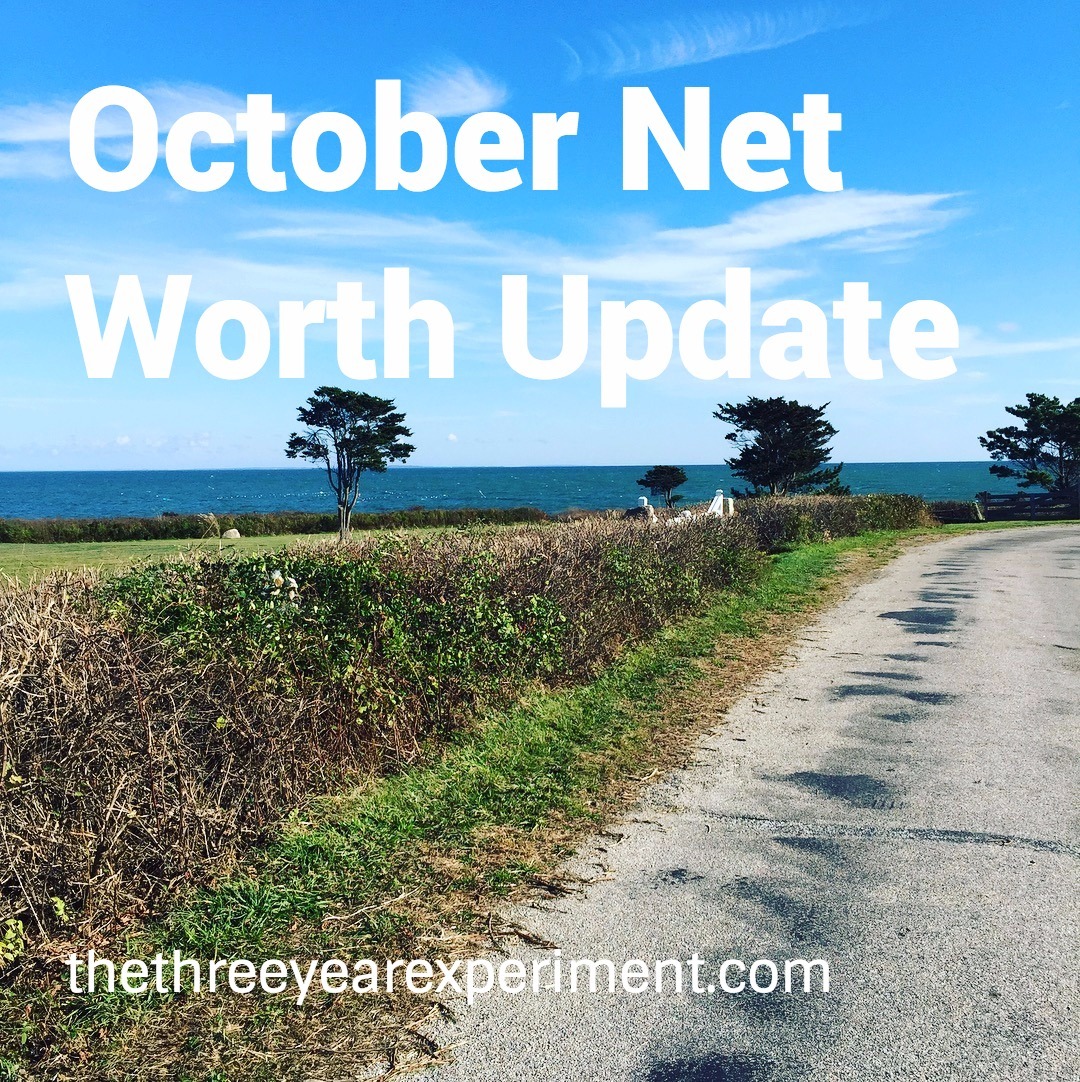 Soon, snow will be blanketing the ground. But for another month and a half, we’ll get to enjoy colder temperatures, overcast skies, and the bare brown silhouettes of hardwoods. Daylight Savings Time has come and gone and we wake up and come home to darkness. Luckily, the dark cocoon only lasts until December 21st. It also ushers in true colder temperatures and gets us ready for the coming winter.

What’s up with the ThreeYears? We’re looking forward to a few long weekends this month (Veterans’ Day and Thanksgiving) and the arrival of the entire extended family clan (my side) at Thanksgiving. The junior ThreeYears are enjoying school (for the most part) and I’m continuing to work a lot, as is Mr. ThreeYear. Luckily, we both have jobs that allow for work/life balance, so we’re home early every evening (I’m home at 3:30pm each day). We both remind ourselves often how grateful we are for the privilege of time.

Two weekends ago, I went on another weekend trip (that’s a record because I hardly ever travel alone) to Rhode Island to run a half marathon. I’d never been to Rhode Island and it blew my expectations out of the water (coastal state, water–get it?). I stayed with a friend at her parents’ house, and they not only housed us, but took us out to an absolutely delicious lunch at their local yacht club (locals join only in the winter when they drop the prices) and fed us home-cooked meals the rest of the time. I was floored by both their generosity and how beautiful their home town was.

Our spending in October was relatively low, despite some medical bills. We find that when we’re well ensconced in the school year/work routine, our spending goes down. October’s been a relatively low-spend month for the three years I’ve kept detailed records.

As of October 31st, our net worth has increased by a total of 24.4% from our starting point in December of 2016. In order to hit our goal of doubling our net worth in three years, we’ll need to increase it by an average of 2.77% each month (or 33.33% by December), but we know that progress won’t be completely linear. Our net worth increased 1.6% from last month, but we hope the increase in December will make up for that, when we pay off the last of our debt payments with Mr. ThreeYear’s end-of-the-year bonus.

October was a fairly uneventful month, spending wise. We’re hoping November and December will be, as well, especially since we’ll only be in the States for half of December, since we’re headed to Chile for a family visit in mid-December.

Housing: $2080. This includes the house mortgage (15 year mortgage) and the apartment in Chile, which we plan to pay off in December.

Groceries: $1047.06. Ouch. We bought several cases of good at our grocery store’s annual case sale, so I’m planning to spend less than average in November.

Eating Out: $188.72. We were doing well in this category until we bought Indian take-out for us and our neighbors. It was delicious.

Household goods: $60.85. One bed frame. We replaced our oldest son’s bed because his had broken and was badly creaking.

Entertainment: $36.76. Netflix, Spotify, and we rented a couple of movies and bought something at K-mart.

Home Maintenance: $73.05. Our monthly curbside compost service ($20), one camp stove for when our power went out, and one tool set to repair the MacBook that I spilled coffee all over (cue groan and face plant).

Gifts: $209.79. We started buying gifts for our family in Chile who we’ll be visiting in December.

Medical: $345.20. We opted to get the high-deductible health insurance this year. It was an experiment that just didn’t work for us. We’ve had lots of medical expenses for various reasons, and have switched  back to the standard plan for next year.

Part of the reason that I keep including our monthly spending in our Net Worth reports, even though it can often be higher than many other FI bloggers, is because I want to see how we do at becoming more efficient at spending over the three years of our experiment. I’m cautiously optimistic for next year, as we’ll have less to spend on housing and transportation.

If you’re wondering how we’ve been able to pay off $38,000 in debt and build a high net worth in less than ten years, read more about how, despite lots of mistakes and a late start, here. (Part of our success comes from keeping spending low on our housing and cars).

We’re grateful for this fall–we’ve had good health, physical and mental, lots of opportunities for work and recreation, and many memories made as a family. We have two big family visits to look forward to at Thanksgiving and Christmas, and in just two short months we will have achieved some major goals–paying off our apartment in Chile has been one goal I’ve personally been waiting (13) years for. This time of year, even though it brings some colder weather and darker days, brings with it a lovely happiness that comes with the start of winter and so many holidays to spend with our loved ones. As always, we’re optimistic for the future and excited to see what the next few months of our experiment hold.

7 thoughts on “October Net Worth Update”