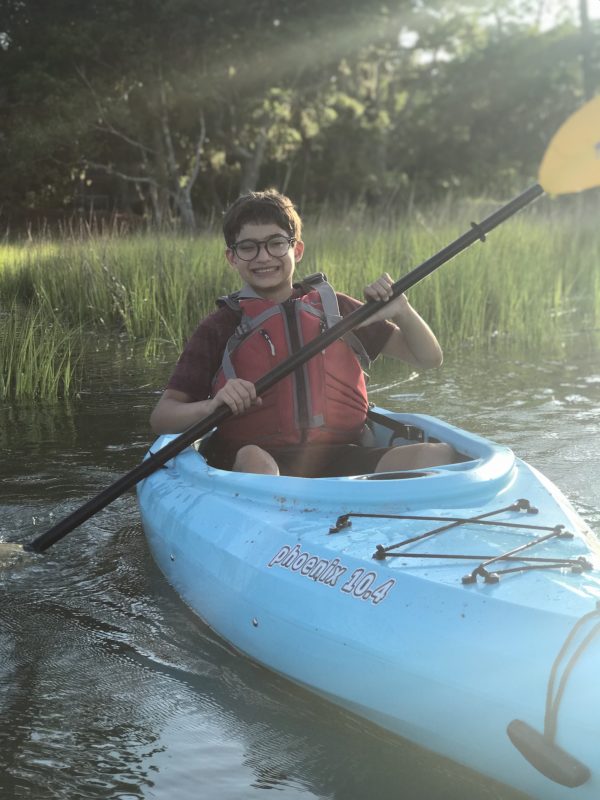 I’m spending the week at the beach this week with my family for the upcoming Independence Day celebration.

Last evening, the boys and I went kayaking with my dad. Junior ThreeYear and I had our own kayaks and Pata (my dad’s grandpa name) and Little ThreeYear shared a two-man vessel.

We put the boats in at high tide from the slip off the back of our house and paddled through the marsh. We got all the way out to a channel of ocean water, with a strong current, and pulled our kayaks up on a sand bar to enjoy our own private beach.

It was one of those magical experiences that I knew the boys would remember forever, as they made giant sandcastles out of the soft, wet sand and slung sand balls at each other.

Dad and I decided to go back when the sun got lower in the sky and we knew we only had an hour or so of light left.

As magical as the kayaking experience was going out, coming back, it was an exercise in frustration for Junior ThreeYear. Because he was paddling his own kayak, he was responsible for getting back across the windy channel, then paddling himself all the way back through the marsh to our house.

The hardest part of the trip was the first part back–the paddle across the windy channel with the strong current. Junior ThreeYear lagged way behind, and started complaining loudly.

“How long is this going to take? My arms are tired! I need to rest!” Even though Junior ThreeYear has been swimming for six weeks, the wind meant that he was having to paddle really hard, and he was not happy about it.

The complaining continued for a few minutes until I paddled back and encouraged him until he made it across the windy patch. “Come on, buddy. You have to paddle hard to get across and you can’t rest yet. You can do it. This is the hardest part of the trip. You’re almost there.”

When the complaining got too vociferous, I’d had enough. “Pull yourself together,” I told him. “You have no other choice but to paddle yourself home.”

His complaining continued almost all the way back, with Pata and I taking turns encouraging and practicing tough love.

Finally, as we were in the home stretch of our paddle, I told Junior ThreeYear the story of the end of my marathon. “I had three miles of my run left,” I told him. “I had already run over four hours at that point and my legs felt like they didn’t work anymore. I made a turn to the final stretch of the race, which was along the ocean. All of a sudden, it started raining icy raindrops and a huge cold wind picked up from the ocean. It was so discouraging, and I felt like I couldn’t go on, but then I saw Pata. He had run three miles up from the finish line, after already running a half marathon himself, to help me finish my race. He talked to me the entire time we ran those last three miles, and I finished the race.”

There’s no better time to monologue to your kid than when he’s a captive audience in a kayak with nowhere to escape, let me tell you.

But he listened, and asked a question or two, and then, before we knew it, we were back at the house.

Pata and I praised Junior ThreeYear and how hard he’d paddled to his dad. We talked about how hard it was but how he pushed through and completed a paddle that would have been hard for a lot of adults. I’ve learned that if your last moments of an event are positive, you remember the entire event positively, and I was definitely spin doctoring the experience so Junior ThreeYear would feel good about it.

I know I wouldn’t have thought of taking a kayaking trip all the way out to the ocean with the boys if my dad hadn’t led us. I would have thought it was too hard, and too long. But low and behold, they were able to do it, and got through it.

One of the keys of teaching perseverance to kids is giving them the opportunity to do hard things. I’ll be the first to admit that Mr. ThreeYear and I are not always good at this. I’ll often shy away at activities that require long bits of time and effort on my kids’ part. Because Junior ThreeYear has social difficulties, we default to avoiding activities or events that will be super stressful or overwhelming for him.

Part of that is good parenting, and making sure we don’t constantly stress him out. But another part of good parenting is pushing him when we think he’s ready.

This summer, we put both boys in our neighborhood’s swim program. It lasted six weeks and took place at our local pool.

The swim program is quite competitive, and you have to try out to make it. Since Junior ThreeYear was eleven at the time of tryouts, he could only try out for the most competitive team. He’s never done swim team before, and although he knows the basic moves, he’s not yet a strong swimmer. Other, younger kids in the program flew past him.

But the coach allowed him to join and was so encouraging to him the whole season, even though he was the slowest one on the team.

He even won several ribbons as part of the relay team. His teammates never yelled at him to go faster, they just cheered him on to finish.

Swim practice was hard for him. He didn’t have any stamina, and he saw that he was consistently last. But during meets, we just emphasized that he was racing against himself, trying to beat his own time. There was even a race where he was almost not last, as he told me.

Both boys learned a lot from going to swim practice each day and practicing. They felt themselves getting better and saw the reward of their hard work when they won ribbons.

I hate watching my kids fall apart, but I honestly think it’s part of learning how to persevere. My boys usually fall apart right before they make a break through. Last night, Junior ThreeYear lost his cool in the open water, and was yelling and shouting like crazy. He was way behind our boats, and I didn’t see how he was going to make it across the open water.

After I yelled at him to get it together, he took a rest from paddling for just a few minutes, then started up again.

I was glad he was able to pull it together and keep going, but we honestly had no other choice, and I think he realized that. There was no other boat he could get in, because his brother certainly couldn’t paddle a boat by himself.

Sometimes Little ThreeYear falls apart and there’s not a happy ending. It happened this year plenty of times with homework, or projects. Usually we just quit the activity and picked it up later, usually the next morning. But we almost always finished it, even if he turned it in late.

I’ve fallen apart plenty of times, even as an adult, and Mr. ThreeYear reminds me of this frequently, when I’m in the midst of losing it.

“Leave it for now and come back to it,” he tells me.

I think the lesson there is that progress isn’t always pretty. If we’re learning a new skill, or undertaking a hard project, sometimes we’ll get to the point where we hit a wall. We need either a) a break or b) encouragement to keep going.

Getting out of debt, becoming a millionaire, and becoming financially independent are long games. They’re hard and boring and require mountains of self-discipline.

There’s nothing I’ve done in life, though, that’s brought as much satisfaction and pleasure as finishing something that was hard. Than proving to myself that I am a person who finishes things, that I’m a person that sees things through to the end.

Ultimately, that’s what I want to teach my kids, even if there are a handful of failed attempts along the way.

Last night, Junior ThreeYear learned that he was someone who could get himself back home when the going got tough. He learned that he could trust himself to finish something hard, and that lesson, more than any other that he’s learned this summer, will serve him well when he starts to manage his own household and money.

What are your favorite (or least favorite) lessons in perseverance? My marathon taught me a lot about myself but it was also one of the most painful times of my life! How about you?