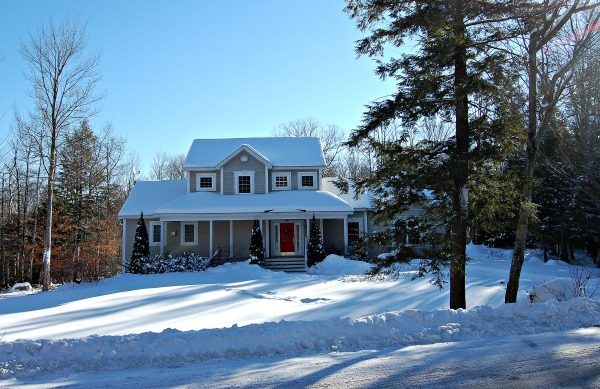 We have officially completed the first quarter of the year! We’re calling this year, which is Year One of our family’s plan to reach location independence, the Year of Good Habits. Each month, I focus on improving or developing one new habit. Sometimes the habits are directly related to personal finance and sometimes they’re related to general self-improvement.  At the end of each month, I have been continuing the last month’s habit (or trying to) and adding a new habit in. (But, just for totally transparency, I would not recommend starting so many new habits in one year for the average person. This is more an experiment for the blog. In real life, I try to add in one or two new habits a year).

Habits–whether intentional or not–have been proven to be incredibly important. They are routines that are so ingrained into our days that many of them we follow without realizing we do so.

Take my after school routine, for example. I get home, help the kids unpack their bags, and usually plug into my phone. I check Facebook and Twitter and generally waste half an hour of time. Habits have a predictable cycle–cue, behavior, and reward, according to Charles Duhigg, author of The Power of Habit. We experience a cue (getting home at the end of a long day), engage in a behavior (pull out my phone, scroll for half an hour), and experience the expected reward (zoning out, resting, feeling a social connection). 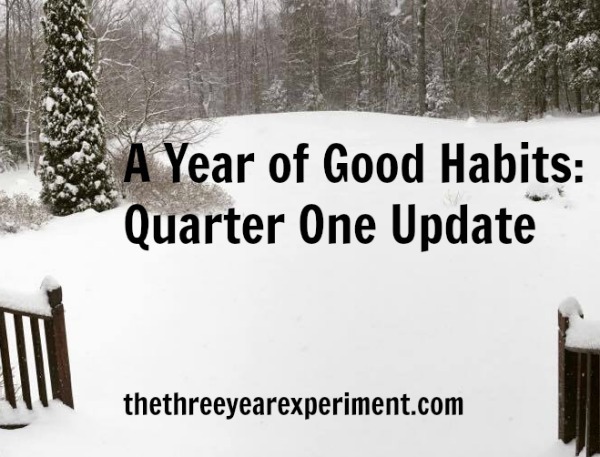 Experts say the way to change habits is to keep two parts of the cycle the same–the cue and the reward–and change the behavior. Once you’ve done that, then you’ve effectively changed the habit. Of course, this is much easier said than done, as I’ve experienced in my own life. Here’s a rundown of how I’ve done with each of the first three habits for the year:

January: In January, we adopted the habit of not going over our budget, something we’ve been notoriously bad at in the past. To help, we signed up for YNAB software.

Grade: A+. I give us a 10/10 on this habit. We have stayed within our budget every month since January. The average amount of money in our checking account has increased by a couple thousand dollars since we’ve started using YNAB. The software uses some powerful cues, like Aging your Money, to encourage you to stay on track. Each month, we budget our paychecks as soon as we get them and do a lot of mid-course adjustment and correction. Turns out this is really important for us, because we like to have the flexibility of changing our plans in the middle of the month. It’s easy to move money from one category to another if you go over in that category (which we did, a lot). YNAB has free workshops to teach you how to use the software. I’m so glad we switched to this service.

February: February’s habit was making the bed every day. I chose this habit because in the past, when I’ve consistently made my bed, it made me feel accomplished for the entire day. The goal was to make it right after Mr. ThreeYear left for work, around 7:30am.

Grade: B. While I have probably made the bed 6 of 7 days a week, which would be a solid 85%, I have not gotten good at making it in the morning. Some days I’ll make it before I take the kids to school or put them on the bus, while other days I won’t make it until after I get home from school at 3:30. It’s true, though: when our bed is made, it brings a measure of calm into an otherwise chaotic house.

If the rest of the house is a disaster, I just walk into the oasis of calm that is the bedroom. I feel much more capable of emptying the dishwasher, or picking up the living room when I walk into my room with its made bed.

March: The month of March was dedicated to writing my top three to-dos for the next day. My goal was to determine my top three goals for the following day and set them early, before lunch. I’d write them down in my bullet journal.

Grade: 45% (Sadly, that’s an F). I only managed to write down my goals for the next day 14 out of 31 days in March. You know, grades are so cruel. I almost got half of the days–that shouldn’t feel like failure.

Part of my failure here is a lack of cues. I don’t house my journal in a prominent, noticeable place. Right now it sits in my in basket, and it’s kind of invisible. I need to move it to my bedside table, or somewhere else where I’ll see it, and it will cue me to write down my top three. Also, there’s not a clear reward. I do really like to accomplish goals, so it’s nice to be able to check off tasks, but because I don’t have a set time in my day to review my To-Dos, I have not consistently written them down. I’m going to keep working on this–it’s too important in terms of organizing my brain for the day to give it up.

April’s Habit: For the month of April, I’m going to adopt another habit that might seem, at first pass, to have nothing to do with financial well-being. But, I’m firmly convinced that developing self-discipline in all parts of your life can help with self-discipline with your finances. So, this month’s habit will be…workouts after dinner!

I will fully admit that this is going to be a habit I’m going to embrace for one month only. Here’s why: In two weeks, our entire family is leaving for a mini-cation to Seabrook Island, a lovely island community near Charleston, South Carolina. I like and need to exercise, but the weather should be improving around May, so I’ll start running outside.

This month, however, I’m going to dedicate my after-dinner time to moving my winter-slow body and improving my mental health, all with the added side benefit of helping my pants fit a little better (I think something’s wrong with my dryer–everything has been shrinking. Weird).

So, dear readers, that is the plan for April. We’re already a couple of days in and I’m happy to report that I’ve done a thirty minute workout or run each day so far this month (four down, woohoo!). There is nothing, for me at least, that supercharges my mental state and helps me cast off this New Hampshire Spring Fever quite like physical activity. As my new job is in full gear and the last quarter at school is already underway, I need good habits to power through these last few months of the school year.

We saw 17 inches of fresh powder on Saturday. Luckily, it’s already starting to melt away. Hope your April is warmer than ours!

2 thoughts on “A Year of Good Habits: Quarter One Update”