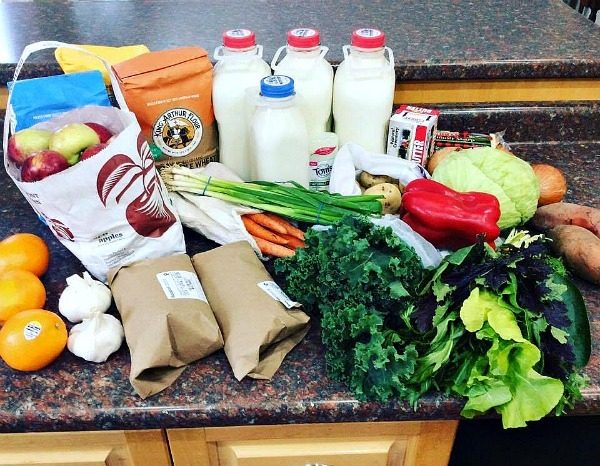 I discovered the Zero Waste movement, like so many others, when I stumbled on Béa Johnson’s blog, Zero Waste Home. Zero Wasters try to purchase and create as little trash as possible. People like Bea, who really originated the movement, get so good at it they can put all of the trash they generate in a year in a mason jar–everything else is refused, reused,reduced, recycled, or rotted, in that order.

The movement is super inspiring. Paying attention to how much trash you purchase and/or generate gets you thinking about how much waste we, as a society, generate. Zero wasters freely admit that for most people, creating no trash is really hard, if not impossible. The idea is to reduce as much as possible the amount of trash you create, to really think about what you purchase and be creative about ways of buying stuff with less packaging.

The biggest place you can make a difference in the amount of waste you make is at the grocery store. 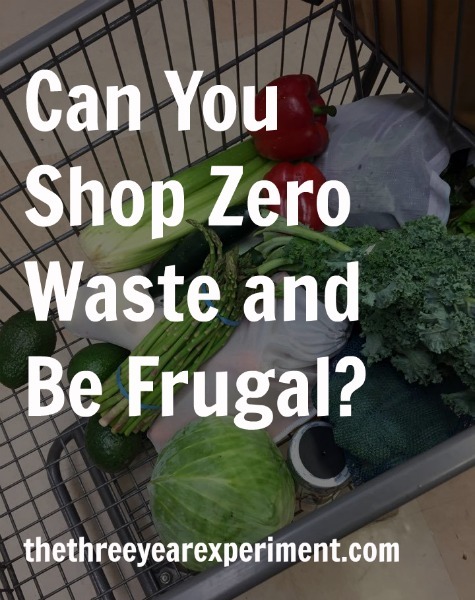 If you choose to buy food without packaging, or ask for your meat and deli items to be put into take-home containers, you can avoid all the plastic packaging many of those items are wrapped in. Zero-wasters bring their own produce bags to the store and many shop in stores that sell in bulk, so they can refill olive oil, peanut butter, and even dish and laundry detergent.

I was excited to try Zero Waste shopping, to see if our family could reduce the amount of trash we produce. But as I’ve gone to the grocery store, and comparison shopped, I realized that grocery stores make it difficult to be Zero Waste and frugal.

A lot of times, the better deal is the fruit or vegetable that’s packaged in the plastic bag. And as a selectively frugal person, whose family is working toward location independence in only three years, it’s hard to pass up the good deal for the better-for-the-environment option, especially when the latter is double the price.

I thought it was time to put my vague, shadowy ideas about Zero Waste Shopping to the test and do a hard line comparison between the items I’d normally buy and their Zero Waste equivalent (if there was one). Then, I could look at the overall cost of Zero Waste Shopping and see if it was considerably higher. If not, I can rest easy, knowing I’m voting for the earth with my shopping dollars while also carefully managing them.

I visited two grocery stores for this comparison. The prices come from Hannaford, a regional chain in the Northeast, and my local co-op grocery store, which sells a lot of items in bulk. I compared prices on items we needed to buy this particular week, which did not include any cleaning items like soap or dish detergent. Most of the items are refrigerator or pantry staples that we buy each week.

One note: Many times on my shopping trip, it was hard to do a one-to-one comparison between items, because the Zero Waste option would be of superior quality–organic, local, or both. So in those instances I’ve tried to find a third product for price comparison, the organic equivalent, so that we’re comparing apples to apples, or, in this case, organic apples to organic apples.

I started my shopping at Hannaford, my local grocery store (when I say local, I mean that I only have to drive about 25 minutes to get there. Gotta love rural living!).

My first stop was produce. Fruits and veggies–this should be easy to shop Zero Waste! But wait. The Loss Leaders for the week, clementines and red grapes, were both packaged in plastic bags and no non-packaged alternatives were offered. How frustrating! If you want grapes or clementines, you have to take them in the package, or pick another type of fruit. Luckily, these were the only fruits I found that didn’t have a Zero Waste alternative.

For most of the other fruits and veggies I picked, I noticed that the pricing was similar, although slightly lower, for packaged items. For potatoes, the price was half as much for the bagged potatoes! Zero wasters might pick the potatoes packaged in a bag because you’d be able to compost it. Luckily, potatoes aren’t too expensive anyway, so the double cost didn’t feel quite so painful.

I was happy to see that some stalks of celery were being sold package free. I don’t know if they lost some bags, but I chose a stalk without the bag. It was the same price.

At the salad bar, there was a big bin of Parmesan. I took a bunch in my reusable bag. Much cheaper than the kind in the plastic container.

One of the hardest items to purchase zero waste are meats. Many people get around this by bringing their own reusable containers to the store. I’ve done this before and the meat counter at Hannaford is fantastic–they put my fish or meat in my reusable jar and usually say, “great idea–never thought of that!” The deli counter gives me a hard time, though, and I usually have to argue with them (“No, I’m sure there’s not a law in NH that says you can’t use your own container. Could you ask the manager? I do this all the time…”). It’s really hard to be so counter culture and get a hard time for it, so I stopped bringing in my jars after a few weeks.

Fish is an easy choice. We only buy fresh fish, sold at the counter, because we make ceviche with it, so if I bring a jar for the fish to go into, it can easily be a Zero Waste choice. Also, there were some very inexpensive seafood options, like mussels, at $2/lb, or littleneck clams, $.60/each.

Other meats sold behind the counter are either slightly more expensive (like ground beef, $5.50/lb versus ) or much more expensive (chicken was almost $6 a pound versus $2.50/lb for the prepackaged option). Many Zero Wasters eat vegetarian, but we’re definitely not so we have to factor in this cost.

Bacon was $6/lb versus $4/lb, but, it was local, from a smokehouse just down the road, and was actually cheaper than its packaged counterpart, which was $8/lb.

For dairy, 18 eggs was $2, but a dozen organic was $5. My colleague at school handily beats this price, at $3 for local, organic, and fresh; I just have to remember to pick them up regularly at school.

The Zero Waste Half and Half option isn’t bad. It’s exactly the same price as the packaged option, minus the $1 bottle deposit. I call that a wash since it’s a one-time cost. The Zero Waste milk in a bottle is exactly twice as expensive as its non-organic, packaged counterpart. But, it’s cheaper than organic! The Zero-Waste yoghurt was ridiculously expensive. If I chose to forgo the packaged option, we would either have to make our own, or go without. This would be really hard because we love yoghurt. Right now, we buy the plastic bins and recycle them.

Now we move on to items that I couldn’t buy at Hannaford. These are items that are sold at the bulk bin at my Co-op. I found a price at Hannaford for comparison, because the everyday Co-op prices are much higher. I had to find organic equivalents for popcorn kernels, almonds, lentils, olive oil, flour, and coffee, because all of these items sold in bulk are organic. Most of the prices between the organic packaged and bulk versions were comparable.

I actually love the bulk aisle at my Co-op. You can get exactly as much as you need. I store it in my glass Bormioli jars, and it makes my pantry look so pretty.

So there we have it. The total cost of the normal, packaged trip was $99.92, the Organic packaged options were $131.14, and the Zero Waste trip was $111.73. The packaged option was the winner in terms of price, but the Zero Waste shopping trip was only $11.81 (or 9%) more than the standard packaged trip. However, many of these Zero Waste products are local and/or organic, so it’s probably more fair to compare them to the Organic column. In this case, my trip was actually $19.41 (8.5%) less expensive than buying conventionally packaged and/or organic when available.

This is obviously an imperfect, subjective comparison, for a couple of reasons:

Now that I’ve completed this experiment, I’ve realized that for me, the Zero Waste equivalent is worth the extra cost. It doesn’t affect my bottom line by very much, and I’m almost always getting a superior option when I choose Zero Waste. By shopping with the mindset of eliminating the packaging I purchase, I’m also increasing the quality of groceries I buy for my family.

Since this is real life, let me be honest: I’m still going to continue to buy the clementines, even though they’re packaged, because we love them. I probably won’t bring jars to the meat counter, and I’ll probably still buy my condiments in plastic, rather than glass, because it’s so much easier.

But I am committed to eliminating a lot of the packaging we buy at the store. I’ll recycle everything that’s recyclable, of course. We’ll keep composting our food scraps, so that we create a lot less trash. And we can happily shop Zero Waste, knowing that Zero Waste and frugality are not at odds.

Several readers mentioned they’d like the tortilla recipe I use, so here it is! (I believe this recipe is adapted from Bea Johnson’s book, Zero Waste Home).

Combine all the dry ingredients. Cut up the butter and squish it into the flour mixture until it becomes crumbly. Add the water and mix well, until all the butter has been combined and you have a well-incorporated dough. Separate into 12-16 small balls. Roll out the dough thinly with a rolling pin. Cook each tortilla in a dry pan over medium heat, about 20 seconds per side.

17 thoughts on “Can You Shop Zero Waste and Be Frugal?”