Last week, the boys and I returned back to New Hampshire from a month-long road trip in the Southeastern US. The Junior ThreeYears and I had taken our trusty Prius down to North and South Carolina to visit family, go to the beach, and soak up the sun and humidity. I find that when I get Southern heat and humidity a bit in the summer, winters in New England are easier to get through. To me, it never gets hot enough for long enough here. I need the “walk out into a sauna” experience to feel like I’ve truly had a summer. 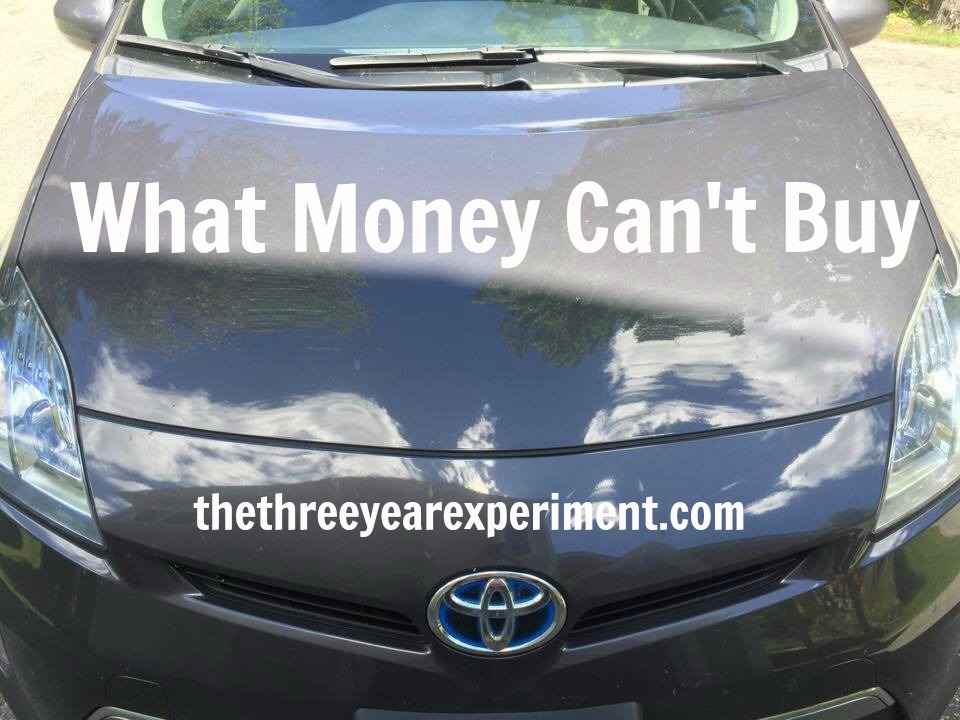 We were on our way from the coast of South Carolina to Charlotte, North Carolina, to visit my sister, on a busy stretch of interstate near Columbia, the state capital. It was around ten in the morning on a Monday, and traffic was heavy.

Up until then, we’d had almost two full summers of uneventful road travel. Everything had gone just swimmingly. But luck was against us that morning. I was in the left hand lane, and was completely surrounded by fast-moving eighteen-wheelers and cars. Suddenly, right in front of me, I saw a piece of tire that had come off of a semi–they’re called road gators in trucker parlance–and I realized there was nothing I could do to avoid it. I thought about veering left, but there was no shoulder on the road. I couldn’t get over to the right, because I was hemmed in. I slowed down as much as I could so that the huge truck beside me wouldn’t plow into me, and ran over the piece of tire.

“Thump thump thump thump.” The boys and I heard a huge noise of something hitting the underside of the car. I got over in the middle lane of the interstate as fast as I could. The truck behind me passed me, and the woman in the passenger seat leaned out of her car and mouthed, “You okay?” I nodded that I was, although I had no idea if our car was.

We got off at the next exit, which was two miles away, to check out the damage. I pulled into a gas station, and grabbed a flashlight from the glove compartment to look underneath the car. I walked around the car and saw that the underneath bumper, just out of sight under the front of the car, had broken in two by the impact of the alligator ripping into it. As I assessed the damage, thoughts started to fly through my head, “We needed to get the broken bumper removed. Should I find a mechanic? If so, where would we stay? What should I do?”

As I finished up the inspection, before I’d even had time to get back in the car and full-on panic, I saw that a little boy had walked up to me. “Do you need help?” he asked. He pointed over to a beat-up champagne-colored car, where his dad stood at the trunk holding up a battered tool kit. “Yes, I do!” I walked over to his dad, who said something in Spanish to his son. I explained to the man, in Spanish, what had happened to the car.

I drove the Prius next to his car, and he proceeded to get underneath the car and mess with tools, until he found the wrench he needed to take off the nuts that held the broken bumper on. As he worked, another man came over, and the mechanic explained what he was doing. I could tell that there were two families traveling together, probably, judging from their accents, originally from Mexico. In the man’s car were his wife and kids, and the second man also had his family with him. All of them waited patiently while he worked under my bumper.

My boys got out of the car. The little boy who came up and talked to me struck up a conversation with my boys. “You guys speak English? Me too! I’m Daniel,” he told them. “Our family’s on our way to the beach. You’re ten, too?”

His father continued to work. He carefully removed each bolt and put it back into the broken bumper. “I’m saving these so your husband can use them to put a new bumper back in,” he told me in Spanish. It took this wonderful man at least thirty minutes to finish taking off the old bumper on the car. All the while, two carloads of strangers waited patiently for him to help me.

“How can I ever thank you?” I asked him as he was finishing up. “Can I fill your car up with gas as a thank you? Do you need any supplies?”

I told him thank you as much as I could, and wished him a safe and fun trip to the beach. “Que Dios les bendiga,” he told me, “God bless your family.” “Igualmente,” I told him, “Yours too.”

They loaded up their car and both carloads of people drove away. I put the broken bumper pieces in the passenger seat and drove over to fill my car up with gas.

The gratitude I felt to that perfect stranger and his family engulfed me. He had done me an incredible service. This perfect stranger, whose name I still don’t know, helped me out when I didn’t know what to do. He refused anything in return.

Even though he didn’t speak English very well (and had no idea that I spoke Spanish before he talked to me), he sent his son over to ask if I needed help. He probably didn’t know if he had the right tools to help me or even what was wrong with my car. But he jumped in to help anyway.

There are lots of things money can buy, and in our society, we’ve monetized most of our transactions. If something of ours breaks, we take it to someone who can fix it, and pay them to do it. If we need a tool, we go buy one, new or secondhand.

But there’s something that holds our society together that’s more precious than anything you can purchase, and that’s what I experienced on that Monday morning at a gas station somewhere outside of Columbia, South Carolina. A perfect stranger offered to do me a huge favor that I couldn’t repay. I trusted a perfect stranger enough to take him up on that offer. Not only did he solve my car problem, he strengthened my faith in humanity.

Maybe that sounds like a grandiose conclusion, but I was floored by the man’s kindness. I was amazed that his family took it all in nonchalantly, “Oh yes, our dad/husband’s helping out somebody else today. We’ll just wait patiently while he takes out her bumper.” I’ll probably never see that family again. They’ll never see us. They’ll probably never get any recognition or reward for anything they did for us. But he helped anyway, because, “por eso estoy.”

When the Junior ThreeYears and I got back into our car, I told the boys that we had a responsibility to pay that man’s kindness forward. Mr. ThreeYear and I have worked hard over the years to teach them financial responsibility and how to make good money decisions. But this was another kind of lesson they got today: how the kindness and generosity of a stranger, who expected and got nothing in return had impacted our lives. How being a citizen of humanity, and helping others, gives gifts that are far greater than anything our paltry financial system could come up with.

There are a lot of things money can buy. But I’m realizing that there are a few precious gifts that money can never purchase. I hope we’re able to pass on such a gift of time, and selflessness, to someone in need very soon.

8 thoughts on “What Money Can’t Buy”