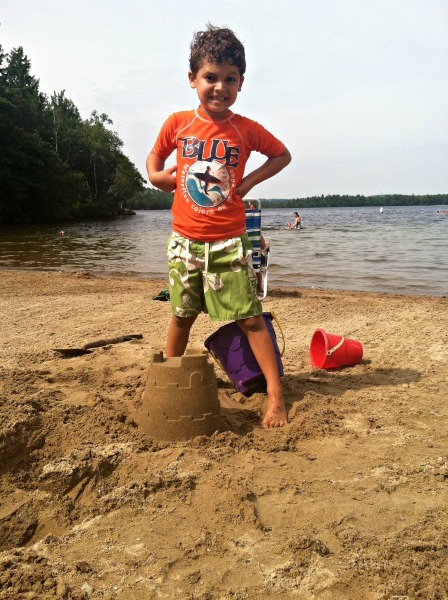 While it’s not yet time for summer, we are starting to think about summer plans, and which summer camps our boys will attend. One of the things we’ve tried to do is give our kids fun camp experiences without breaking the bank, especially since I’m a teacher and don’t have an income during the summer. Here are my favorite ways to save on summer camps.

For our family, summer is a time to be together and visit family, since I’m a teacher and am off during the summers. However, when I worked during the summer, camp planning was a big preoccupation this time of year. The massive expense of camp was a big concern, because I needed a safe, fun place for my kids to spend their days during the summer weekdays. But camps are pricey. Here are some ideas for ways to decrease the cost of camps for your kids this summer.

Three years ago, a friend told me about a camp in a neighboring town. It was a one-week day camp held at the local airport, and it was completely free! The kids who attended were able to fly with local pilots and learn the basics of aviation, at no cost. The camp was started as an initiative for this lower-income community, but anyone could participate. In subsequent years, they increased the cost to $40 for the week, still an incredible deal for a camp that takes kids flying.

The camp wasn’t well publicized and I only heard about it through several friends who lived in the community. We put it on our list for this summer as this is the first year both boys would be able to participate.

There are lots of day camp opportunities available for little or no cost, but they’re not always easy to find. Sometimes, they’re advertised in local newspapers, on town websites, or other out-of-the-way places. I let friends know that I’m looking for interesting, low-cost opportunities for my kids so they’ll pass on any info.

If you’re a person of faith, consider Vacation Bible Schools. These are camps held by local churches designed to give kids a week of fun, for little or no cost, and teach them more about Christianity (or another religion–check with your place of worship). Kids have craft time, music, games, snack, and bible lessons. VBS is usually one week long, and runs 9-12 or 9-1. Some run in the evenings, from 6-9. Most are free, although some have a small $20-$40 fee or ask for donations. Even though the camps are only half a day, my kids are exhausted by that time and have had lots of socialization.

This is a great option if you’re home with your kids in the summers and can’t really justify the cost of camps, but would love to give them some structured experiences with other kids. If your home church offers a VBS, it gives your child a chance to hang out with friends he or she knows and likes.

Little ThreeYear will be attending VBS at our new church this year. It runs from Tuesday-Friday, 9-12pm, and costs $25. I’m excited that it will give him a way to meet more kids his age.

When I was growing up, my town offered an incredible VBS next to a river. In addition to the typical classes, we learned to canoe, hike, and spend time in nature. The town is still offering that same VBS and the next generation of kids are now learning those same life skills while in VBS.

If your child is a part of your local boy scout or girl scout troop, then you’re probably aware of the great, low-cost camps these organizations provide. Boy Scout camps usually last a week and involve camping, hiking, and other survival skills like fishing and making a fire.

The great thing about these camps is that your kids can attend with friends from their troops, and spend time in the great outdoors. They generally involve lots of hiking, camping, swimming, and sometimes fishing and canoeing.

When I was younger, I went to 4-H camp. It was overnight camp and cost my parents the princely sum of $60. There were lots of outdoor activities, archery, hikes, good food to eat, and swimming in the lake. I will admit, this wasn’t my favorite camp growing up because there was a “tough crowd” at the camp who picked on my friends and me, but that’s just one experience.

Often, local YMCAs will offer day camps for kids. My children spent a week each at YMCA Camp at their grandparents’ in South Carolina for $80 each! They could be dropped off as early as 7am and picked up as late as 6pm. The kids did crafts, played games outside, and even received YMCA-provided snacks. Scholarships were also available for families in need. The great thing about this camp is that it was diverse. Kids from a range of socio-economic backgrounds attended and my kids had a chance to make new friends.

In larger areas, the Y offers lots of specialized options, like cheerleading camp, art camp, athletic conditioning camp, and even triathlon camp. These all-day camps cost from $170-$200 for members, up to $280 for non-members.

YMCA also has great overnight camps, though they can be a lot pricier. Junior ThreeYear had his first overnight camping experience at the YMCA Camp Coniston, and it was unforgettable.

In North Carolina, our local YMCA Camp Thunderbird has overnight camps from $1000 (member price) for a week to $4060 (non-member) for four weeks! While that is not what I’d call low cost, I can confirm that YMCA camps provide experience in nature, swimming, and other life-skills practice and introduction (Junior ThreeYear learned riflery).

When I was still a stay-at-home mom, my friend told me about summer swim lessons at a local lake. The lessons were $50 per child for two-week sessions. They lasted 45 minutes each, but included a day pass to the lake that was good from 9-1pm each day.

I signed my kids up for lessons, we’d arrive around 9-10am, and we’d spend the rest of the morning at the lake. I brought a picnic lunch, and the kids had a fantastic time playing with friends either in the water, in the sand, or on the playground. The lessons also created a structure to our days, so that summer, too, had a rhythm (something that’s really important for my two ADHD boys).

While I needed to be present each day, this was an inexpensive way to provide my kids with an outlet and structure to their summers. Plus, I got to hang out with other moms at the lake and work on my tan.

Another creative option is Grandparent Camp. Maybe your parents or in-laws would be willing to take your kids and their other cousins for a week and do fun things with them, giving you a break or allowing you a free week. Junior ThreeYear is currently working on his grandparents to stay at their house a week by himself (without his brother) so he can have some quality grandparent time this summer. For middle school aged kids like mine, this might be another great way to give them special time with their grandparents, as well as space away from younger siblings.

Mrs. Frugalwoods recently published a great list of creative ways to save money on summer entertainment. Make sure to check it out for more ideas!

While paying in installments isn’t really saving, it does spread the cost of camps out over several months. If you’ve chosen a relatively expensive camp (as we did last year for Junior ThreeYear; it was his first overnight camp), see if the camp will allow you to pay in several installments, so you can absorb the extra cost over several months. Because we sent our son to such an expensive camp, he only participate in one camp last year (I don’t work during the summers so we have that luxury). We talked to him about it and he made the decision that he wanted to participate in his special camp and forgo other camps.

Paying for his camp in three installments definitely helped our budget. We paid the last installment a month before summer started, while I was still working, so when summer arrived we were all paid up.

In my area, camps start advertising in February. Generally, there is a giant spread in the local newspaper. While planning early won’t help you save money on camp per se, you’ll definitely have more time to choose the best option, save up, and research cost-saving possibilities like sibling discounts and scholarships. The best options fill up quickly. How do you know what the best option is? It’s worth it to talk to neighbors, classmates’ parents, and friends in your area and get their opinion.

When my boys were in camp all summer, I debated about which camp to put them in. I ended up going with a lower-cost option close to my work so I could pop in and see them if I had time. The boys have a fantastic time, especially on bike day, when they could bring their bikes in and ride around. I got a lot of opinions since the camp was in another town, and I wanted to make sure it was a solid option.

I hope this post will give you some ideas you hadn’t thought of for camp options for your kids.

Is there anything you’ve tried that I didn’t think of? I’d love to hear in the comments!

8 thoughts on “8 Ways to Save Money on Summer Camps”