Our family has been planning to become location independent and move for a while, now. Our dream is to double our net worth by the time I’m 40, and find jobs that will allow us to travel more, split our time between two continents, or live in a foreign country for a few years. Because… we only have one life, right? And the kids will be little for like ten more seconds and then they’ll be grown… but making the decision to sell our house? It’s not easy. 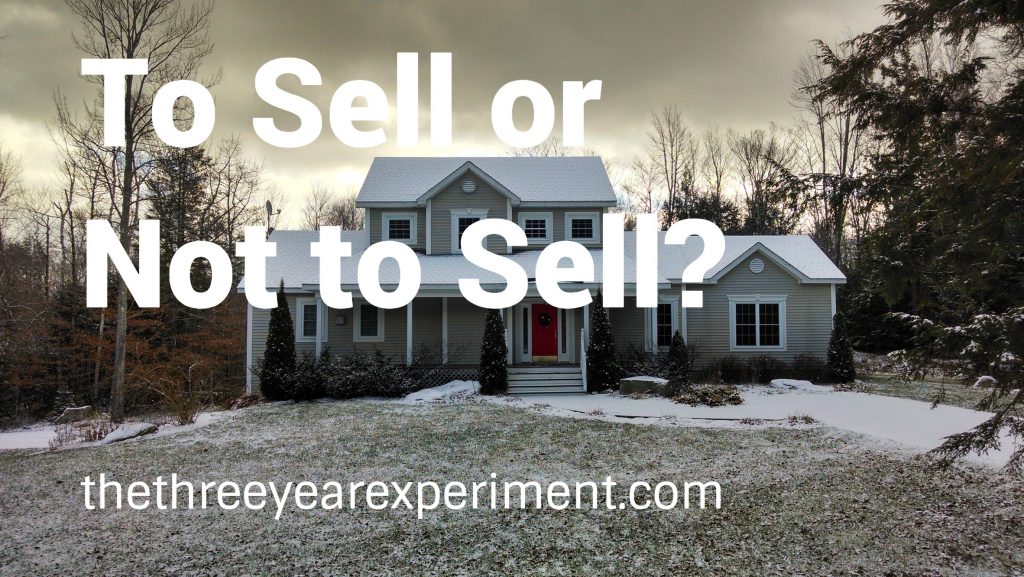 One of the reasons we travel so much is to remind ourselves that there is another way to live than the way we currently do. We are a family of habit, and it’s easy to become so immersed in the routine of our daily lives that we never question our decisions or habits.

But one question that Mr. ThreeYear and I have had nagging at the back of our minds for a while now is… should we sell our house and find a smaller place to rent?As I wrote about in The Best Way to Avoid Lifestyle Creep, keeping your housing costs low is key to financial independence. And we’ve had the unsettling suspicion that our house is a little too big for us for awhile.

After we got back from Chile last week, that suspicion was confirmed. We spent most of our time in Santiago staying in a less-than-600-square-foot (52 sq. meter) apartment. It was small, and with three bedrooms and two bathrooms, was extremely space efficient. Yes, it was a little tight sometimes, and cooking was a bit difficult. But there were definite benefits, as well. One benefit was the shared space. We were able to go downstairs and use the common areas for the Junior ThreeYears to ride their scooter, or swim in the pool. There were tons of other kids playing, too, and while there wasn’t a lot of interaction, because of the language barrier, that would definitely change if the kids had spoken the same language.

While we were in the apartment itself, we didn’t get in each other’s way, surprisingly. The boys each had their own bedrooms, and they’d take their few toys we had packed and go play or read in their rooms. We did homework each morning on the small round breakfast table, then would move the school books to another part of the apartment when it was time for lunch. I even lost Junior ThreeYear in that tiny space at one point! (He was on the balcony, reading, and I didn’t see him because of the curtains).

The thing that was so nice about the small space was that we were together, we were cozy, and we were able to enjoy each other’s presence. Our current house is so big that we can’t see or hear each other when we’re in our rooms, and it can feel lonely. Most of our time is spent in the common area, our dining and living rooms, which are basically one big space (and are larger than the entire apartment in Chile, by the way).

Little ThreeYear has grabbed my hand at several points since we’ve been back and asked me to come with him to some remote part of the house, “because I’m scared to go to the basement alone, Mama.” Our basement, by the way, is not a dark, bare-boned forgotten space in the bottom of the house. It is finished, carpeted, and filled with Little ThreeYear’s toys, as well as a comfy couch and chairs. But after all that togetherness in Chile, Little ThreeYear feels lonely in the vast swath of basement without another person.

But does it make sense to sell our beautiful home, which we bought in a short sale at a very good price, with its spacious backyard, forest hiding-spots, and ample space for visitors, to move to a condo with no garage (a huge negative during New Hampshire winters), much less space, and community fees? END_OF_DOCUMENT_TOKEN_TO_BE_REPLACED