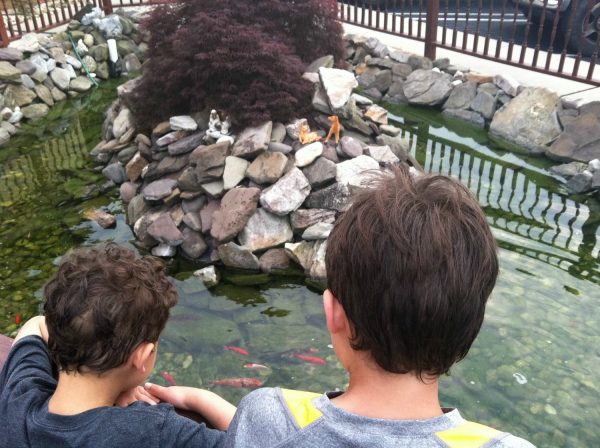 Parenthood is a big responsibility and I feel like I’m messing it up a dozen times a day. When it comes to teaching our kids about how to manage their money, though, I feel like we really need to get it right.

Mr. ThreeYear and I got out of debt by following Dave Ramsey’s baby steps, and we also listened to what he had to say about kids and money. He has a lot of great advice when it comes to teaching your children about financial matters, so we started there. But money is such a complex and important topic that we certainly didn’t end there.

Here’s what we currently do to make sure that our kids have a good relationship with their money.

We Give Them an Opportunity to Earn Money

Ramsey recommends giving your children, at as young ad 3 years old, three jars in which to put their money: Save, Give, Spend. We made jars for the boys early on. They have the opportunity to earn money by doing their chores every week. They can earn up to $6 per week for doing their three chores (these are age appropriate chores–for my 10 year old, it’s making his bed, clearing the table, and doing his laundry each week, and for my 7 year old, it’s setting the table, making his bed, and tidying his room). If they don’t do their chores, they don’t get paid.

They must put $1 in their Saving jar and $1 in their Giving jar and the rest they can put into their Spending jar. This advice comes straight from Ramsey and we’ve followed it because it’s smart. The jars are a visual way to see where their money is going. Over time, they watch their saving dollars grow, and when they have enough, we open an interest-earning savings account.

They take their Giving money to church each week, or sometimes they’ll save up and give it to another charity, like one the school is collecting for. They’re both very proud to hand over their Giving dollars, and I love that we’re teaching them that giving money to those in need is not only a responsibility, but feels good.

They have chores they have to do without getting paid, because we don’t get paid for everything in life, but by giving the boys the chance to earn their allowance money each week, we’re showing them the direct correlation between working and earning money. They’re in control of what they earn. And sink or swim, we’re teaching them that their efforts (or lack thereof) have financial consequences.

Dave Ramsey’s daughter, Rachel Cruze, was recently on the Afford Anything podcast talking about this very topic. It’s a great listen if you have more questions about the jar system.

We Talk About Money

In our society, money can be such a taboo subject. Why is that? We are very open with our kids about our money (some would say too open). Our oldest knows roughly how much net worth we have, and we show both kids their balances in their college savings account. We also talk about our budgeting with them, what we’re saving for, and how we plan to reach our goals (of location independence!).

It’s fairly common for young children not to understand how the money system works and to therefore feel scared about it. My youngest, who’s 7, recently asked me, “Mom, what happens if you or Dad loses your job?” This is a valid question, and one that could cause many families concern.

I took the opportunity to explain to him that his mom and dad were good savers, and because we made a point to save a large percentage of our salaries from those jobs, it would actually be okay if we lost our jobs. We’d have enough money to live on. “Plus,” I told him, “Mom and Dad work very hard at getting good at our jobs, so if one of us did lose our job (which is very unlikely), we’d have an easy time finding another one. But, that’s the reason we save so much–so that if something like that happens, we’ll be okay.”

With kids, you can only go into a small amount of detail. We’ve learned that teaching them about money is something that’s better served in small bites over time.

We Don’t Say “We Can’t Afford That”

When our kids were very little, they asked for new toys all the time. Even though we didn’t have cable, they would occasionally see ads for new toys and want them. Or, they would ask if we could go on vacation in Hawaii because Phineas and Ferb did (that trip is still on our list, by the way).

We have made a conscious decision not to say “we can’t afford that” to the boys. If they ask for something we’re not going to buy them, we tell them, “your dad and I choose not to spend our money on that.” We’ve also said, “that’s not in the budget this month” or “you know we have a policy not to buy you toys for no reason at all.”

To me, the phrase “we can’t afford that,” while it does teach kids that money is not infinite, makes children feel that money is beyond their or their parents’ control. It says, “I’d love to buy you that toy, but I can’t.” We don’t want our children to associate that powerless feeling with money. Instead, we want them to get the message, “Your desire for a toy in the middle of the week for no reason whatsoever is misplaced” and “toys are not a good priority for our money.”

One thing we have told them, especially related to travel, is, “that sounds like a great trip! We’ll save up for it and make a plan about when we can go.” Hence, we have a trip to Hawaii that we’ll be taking one day in the not-so-distant future (I’m not sad about that one!).

We Teach Them Delayed Gratification

When the kids have asked for toys for no reason, especially when they were little, we used an amazing trick that stopped their whining. It went something like this:

Little ThreeYear (in a whine): Mom, can I get that (insert overpriced made in China piece of plastic here)??!!!!!

Me: Oh, what a cool toy! If you’d like to get that, let’s put it on your (Christmas or birthday, whichever is closer) list!

Little ThreeYear: Okay! Ooh, when I get that, I’m going to…. (talks a minute about the toy, then moves on to something different).

We told the boys that we only bought toys on Christmas or their birthdays, and so, if they wanted a toy, we’d be glad to “put it on the list” and get it then.

Of course, there is no list, but when they were little, they didn’t know that. They’d forget about the toy in 2.8 seconds and then move on to something else. But, when we told them we’d put it on the list, they felt reassured that their desires were being acknowledged and they could get that toy someday. That trick worked beautifully for years, and we still occasionally use it.

In this way, we slowly taught our kids about delayed gratification. They learned that just because you want something now doesn’t mean you get to have it now (this is an extremely powerful lesson that unfortunately, many adults have yet to learn!). If they really wanted something badly, and talked about it over and over, we’d get it for them on said holiday.

Another strategy we’ve used as the kids have gotten older is to allow them to use their spending money to buy themselves toys. It’s their spending money, so they can spend it however they’d like (as long as it’s not something outside of our values). If they want something, they have to wait the requisite number of weeks, making sure they do all their chores in the meantime so they can earn the maximum allowance possible.

Sometimes they’ll also do extra chores so they can get paid extra. And their grandparents always seem to be handing over bonus amounts of cash. So they often have funds to spend, or misspend, as they wish.

We Don’t Try to Change Who They Are

Little ThreeYear is a spender. He’s been that way his whole life. He spends every spare nickel on Lego sets and other toys he wants. He loves to look at fast, shiny cars and ginormous Lego sets and imagine himself with them.

This stresses his older brother out. Junior ThreeYear is a saver. He saves as much money as he can, only occasionally indulging in buying a game for the XBox (or now, Nintendo Switch, which he got for Christmas).

We’ve had many talks with Junior ThreeYear about how he has to understand that his brother has a different money philosophy than him. Little ThreeYear will probably never save as much of his income as his older brother, and that’s okay. We’re not trying to turn our kids into mini-clones. Different people have different values.

What we do teach Little ThreeYear, as much as we can, is that buying stuff doesn’t bring as much happiness as buying experiences. We’ll often buy the boys experiences for birthdays or Christmases. For their birthdays last year, their grandparents bought them season ski passes, and we’ve talked every time we’ve gone skiing this season about how what a great birthday gift it’s been.

Some lessons we tell, and some we show. We try to point out the “show” lessons when they happen. If Junior ThreeYear has spent his last allowance dollar (again!) and then wants something else the next day, we point out how bad it feels when you don’t have any money left. We show the boys how their college funds have grown over time by the power of the stock market. We ask them how their big “thing” purchases make them feel after they’ve had them for two or three days and the luster has worn off. We also show Junior ThreeYear that it’s okay to spend money, especially on things he really wants. He’s been very happy with a Switch game he bought and often tells me, “I’m so glad I bought that!”

For me, the best money lessons in life were ones I experienced myself, and that’s exactly what we want for the boys. By giving them money to manage and mess up with now, we’re allowing them to make money mistakes (which we all make!) on a smaller scale. Hopefully, when they start to earn larger amounts of money, they’ll have left the big mistakes in the past and can manage their funds better.

There’s so much to talk about regarding kids and money that I’ll be back next week with more!

How about you? What do you do to teach your kids (or nephews, nieces, cousins, friends’ kids) about money?

10 thoughts on “What We Teach Our Kids About Money”