There are certain tools that I believe are essential for saving money and getting longer life out of your possessions, especially in your home.  The following is a list of my tools of the frugal trade, simple tools or ingredients that I use time and again for saving money. 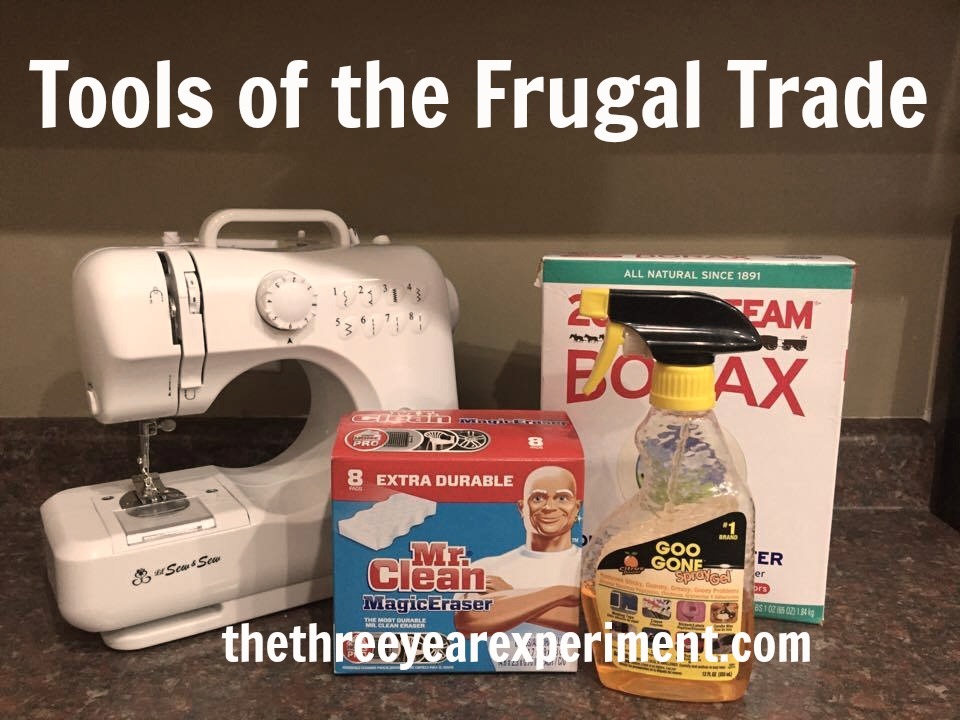 The truth is, in our modern world, we’ve lost sight of part of the old adage,

It’s the “make it do” part that is an anathema to us. In our age of planned obsolescence and products engineered to fail, we’ve lost the repair skills that seemed like second nature to our parents and grandparents. It’s only natural that we buy new instead of repair, because:

That’s true of a lot of things. For example, when I broke our blender a couple of months ago (long story), I didn’t destroy the motor, just the jar (the top part where you put your liquids). But to replace that part cost about $50! Mr. ThreeYear opted to get a brand new, on sale Ninja blender with two single serve cups for just $70. While it was $20 more expensive, it’s a way more powerful blender. We plan to sell the motor on eBay and recoup some of that cost, as well.

But this idea of replacing things is expensive when there are tools available to help you repair your current stuff without much cost at all. We didn’t know how to fix the blender, but there are a lot of other items that break or age that we can fix. And there are several essential tools in my frugal arsenal that have come in handy over the years. Here are my favorites:

I don’t think I have to convince anyone that Magic Erasers are truly magic. We use them with everything. When you have kids, they’re great for getting scuffs off painted walls. My oldest had a whiteboard map on his wall, and dry eraser dust had gotten everywhere. I used the Magic Eraser and it cleaned up everything, with no harm to the paint.

You can use Magic Erasers on your trim and to clean your cabinet fronts. I’ve used them on the bottoms of my son’s Converse, to make them gleaming white. You can use them to get dried paint off door hinges.

One of our heaters was blowing soot onto our vinyl siding from an exterior vent, and we used Magic Erasers to clean off the soot from the side of the house, when nothing else would work.

We also have heavy minerals in our water (we have a well) and they leave stains on our toilets. We use Magic Erasers to get our toilet bowls shiny white again.

Good Gone is a miracle product as well. If you are a bargain hunter, like I am, you’ve probably wrestled with the frustration of removing yard sale stickers from your purchases. With Goo Gone, you can get rid of the sticky aftermath of stubborn price tags. TJ Maxx price tags are notoriously hard to get off the bottoms of shoes, and Goo Gone works great for those. I also use it to clean up my scissors, when they get gooey and sticky. We’ve used Goo Gone to get sticky residue off of the dashboard in the Prius (when we bought it, the previous owner had mounted something to the dashboard).

If you’re like me, you might be asking, “What is borax?” Before I bought it for the first time last year, I didn’t even know what it looked like. It’s a white, powdery substance that looks exactly like laundry detergent. It’s sold in the detergent section, in the same size box as detergent. And it’s a secret magic agent for getting clothing clean.

We have two pillows on our bed that are the nastiest, yellowest pillows ever. In the past, we’ve thrown such pillows away and bought new ones, but that’s not a solution that satisfies me environmentally or fiscally. So I looked up in the good old internet how to whiten pillows, and found a killer recipe. I mixed:

in a pot of boiling water, and then poured it on top of my pillows in the tub. I let them soak overnight, then dried them in the sun. They are so much whiter than they used to be! I’m going to do this twice a year to keep them white.

I had such good results that I tried a similar method with my yellowed bed sheets. I thought I’d never be able to whiten the sheets again–in fact, I was about to throw all three sets of sheets away. They were that yellow. But I soaked them in a bucket of cold water overnight, along with a cup of Borax, then washed them, then hung them out in the sun to dry (the sun is a natural whitener–did you know? I had no idea). It was miraculous! Truly. A pair of sheets my sister-in-law had given us for our wedding, and that I thought were forever yellowed, came back to life. They’re on the guest bed with the new pillow shams.

I bought my sewing machine on Amazon for less than $100. It is the tiniest sewing machine I’ve ever seen, and very lightweight. When Mr. ThreeYear and I first took it out of the box, we laughed, because it’s the size of a toy sewing machine. But over the years, it’s proved its worth. I love that it’s tiny and lightweight, because I can store it in my linen closet without a problem. I don’t have to have a dedicated sewing space. It has all the features of a full-sized sewing machine. I checked out a few DIY sites like  DoYouSew.com and after a couple of articles and vidoes I felt totally comfortable using my machine to tackle any project. Over the years, I’ve used it to make curtains, make pillow shams, repair clothing, and hem. I’m not much of a seamstress, and I certainly don’t buy sewing patterns and make clothing, but it has come in handy on so many occasions. Last Halloween, I made Mr. ThreeYear a simple Jon Snow costume. Last week, I made a pair of pillow shams for the guest bedroom out of an old tablecloth, since we’re having Mr. ThreeYear’s cousins stay with us and I wanted to spruce things up.

While these are just four of the myriad cleaning supplies and household tools I use to keep our material possessions in good working condition, they’re four that I’ve used over the space of the last few weeks. Sometimes simple and inexpensive tools can help you from spending hundreds of dollars on new items (like sheets and pillow shams! and alterations of the mattress thickness).

What are some of your favorite frugal tools?

2 thoughts on “Tools of the Frugal Trade”