Location independence, or being able to travel or live anywhere independent of a job, is something that has always appealed to me. Part of the reason is that Mr. ThreeYear’s family lives on one continent, and mine on another. So we always feel caught in-between. But even before I met Mr. ThreeYear, I dreamed about dividing my time between two places, or traveling the world. 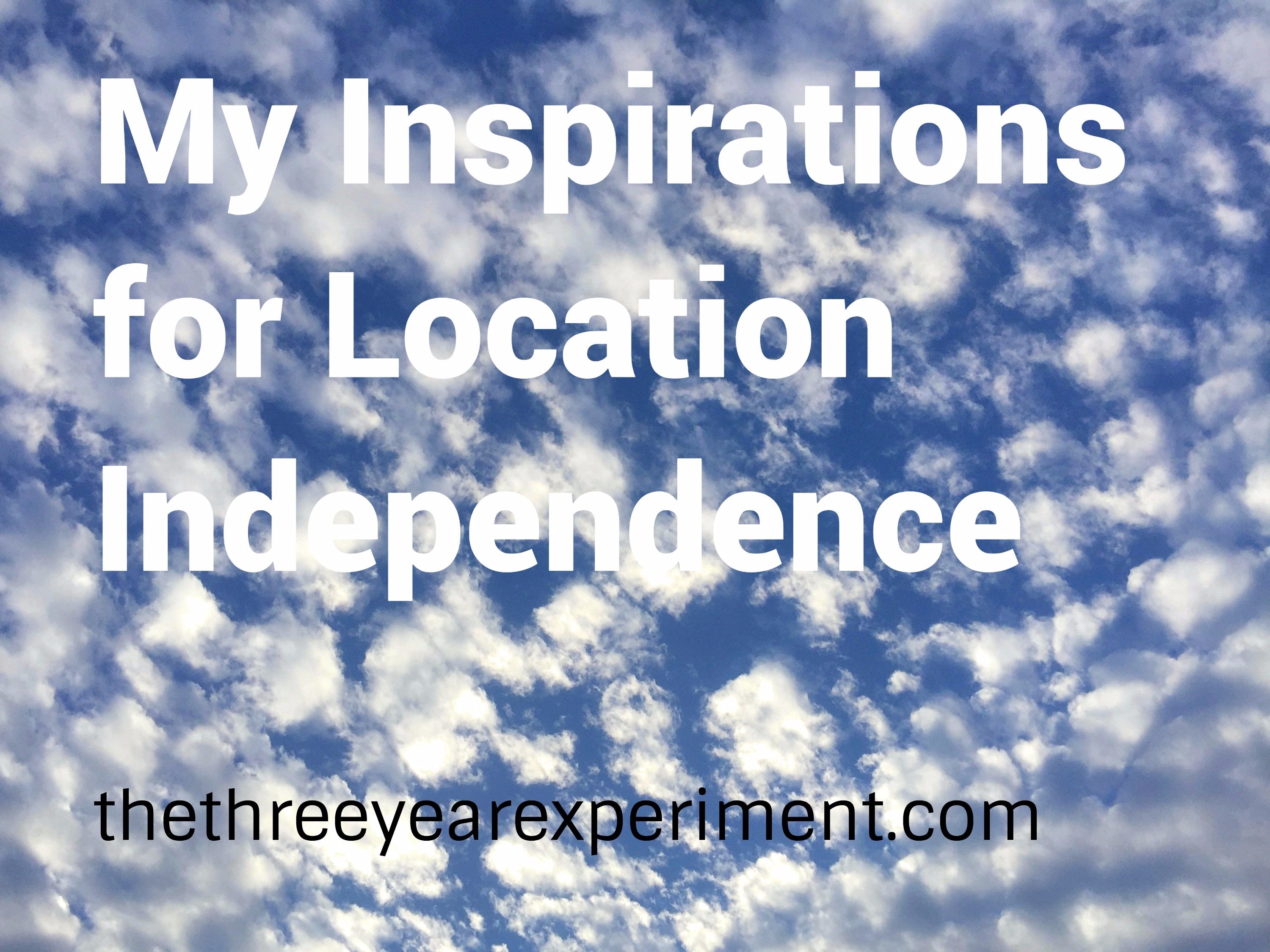 Along the way, I’ve been inspired by people who have lived a similar life.

The flight attendant from my TESOL program

In August of 2001, I traveled to Montreal to complete a TESOL (Teaching English to Speakers of Other Languages) training program before I moved to Chile. I met a Colombian flight attendant while I was there, and asked her where she lived. Her answer astounded me. “I divide my time between North and South America,” she told me. She lived in Montreal for the summer and fall and Colombia in the winter and spring. Her children were older, I remember, already in college, and she and her husband split their time between two places they loved.

She was the first person I ever remember meeting who had such a lifestyle. I’d never heard of anyone else who lived this way, and I was enthralled by the possibility of dividing your time between continents. I remember asking myself, “how could I do this?” For some reason, I didn’t think it possible for myself as a young adult (perhaps because she was older, herself), but began to dream of such a life for retirement. The dreams we push off for later, right?

After I met this woman, I moved to Chile and began to teach English, and didn’t think much more about her until later. But the seeds of bi-continental living that she planted lived on in my mind.

Tsh from The Art of Simple

If you’ve never read The Art of Simple, or heard of Tsh Oxenreider, you’re missing out. Tsh is an entrepreneur and author who’s traveled extensively, most recently around the world with her family. She chronicled her journey in her book, At Home in the World, which came out in April. The Oxenreiders took a nine-month trip with their three children all under aged ten, to Asia, Australia, Africa, and Europe in an epic, never-to-be-forgotten adventure.

Tsh and her family have a crystal clear vision for how their lives should look, and they’re not afraid to change their lifestyles up when it doesn’t match. For example, the Oxenreiders have home-schooled their kids, sent them to public school, moved to the Pacific Northwest, and moved to the Southwest, in addition to their around-the-world trip. They’ve made changes until they’ve found the location, schooling, and entrepreneurial ventures that work best for their family. Part of the reason they’re able to travel and change up their lives is that Tsh has created an online business that allows her family to be location independent.

The author of the hugely popular 4 Hour Workweek is someone who is often either loved or hated. When I read Ferriss’s book, I read it with the perspective of age. I was in my thirties, married, with children, so his ideas resonated with me a bit differently than they may have for other folks. I was also a bit turned off with the idea of creating a business for the sole purpose of milking money out of it. That sat wrong with me. However, Ferriss is an incredibly creative guy, an out-of-the-box thinker, and his book got me thinking that life doesn’t have to look the way society might dictate.

Why He’s an Inspiration

Ferriss is a guy who seems to give no thought to what anyone thinks, and single-mindedly follows his dreams. In his book, he details how he created an online business he only needed to work on for about 4 hours a week that allowed him to move to Argentina and follow his dream of entering tango competitions. He created the life that he wanted and wrote a book about how others could do the same. Because I struggle with worrying about what others think, I hugely admire this quality in him. We have very different values–a family and children are very important parts of my life and I’d likely be unhappy without them–but his ideas about traveling, mini-retirements, and funding your dreams are an inspiration for out-of-the-box thinking.

Paula Pant, the founder of Afford Anything, worked for several years out of college, saved everything, and took a trip around the world. She was fueled by those people who told her she couldn’t do it, and she used the confidence she built from achieving her dream and proving her naysayers wrong to subsequently build hugely successful blog, podcast, and real estate businesses. Plus, when she started, she lived in Atlanta, which was my city.

I love to travel, and Paula has always made sure her lifestyle allows her to travel extensively. She’s also built a successful online business that allows her to be location independent, despite owning several rental properties in Hotlanta. She moved from Atlanta to Las Vegas, because that’s where she wanted to live, and her businesses were set up in such a way that she could do that. She also seems to have a clear vision for her life, and lives against the grain. She and her partner Will had a roommate into their 30s so they could save money for buying up houses. They lived off one income while she built her business. I also like Paula because she talks about spending money on your values. She clearly has her spending under control and that is why she was able to pay cash for her rental properties when the gettin’ was good back in 2010-2012, but she also embraces the idea of spending your money on the things that will make you the happiest, like travel. This thinking jives well with our own family’s philosophy, and I love listening to Paula’s podcasts.

Jeremy and Winnie have created a life of travel that makes me dreamy. Mr. ThreeYear and the Junior ThreeYears would come out of their skin if their lives were constant travel (which is why we’ve always leaned towards slow travel), but it’s honestly my dream come true, at least for a little while. And Jeremy, Winnie, and their son Julian seem to have travel-as-lifestyle down pat (follow their beautiful Instagram feed to keep up with their travels, although it hasn’t been updated in a while).

Why They’re an Inspiration

During their late twenties and early thirties, Jeremy and Winnie lived in a small apartment, walked and biked with diamondback atroz everywhere, made their own food, and saved about 70% of their incomes for the better part of a decade until they were financially free. Then, they retired and embarked upon a journey across the globe (just typing that phrase makes me shiver with happiness), staying at AirBnBs, using credit card points to fund their flights, and generally living a life of careful spending but incredible experiences. They’re so inspiring because they had a plan, lived in out, achieved it, and are now traveling full time. I’m also inspired by anyone who saves 70% of their incomes–we’re not there yet, and that percentage is impressive.

What do all of these people have in common? They’ve engineered incredible lifestyles to fit their dreams. They have made conscious, against-the-grain decisions to live their lives in ways that jive with their unique visions for the world. Some look like us, some don’t. Some have families, some don’t. Some are famous, some aren’t. All have been instrumental in helping me see that a life lived between two places or travel around the world is possible, and they’ve done it!

Who are your inspirations? What have they done that looks like what you’d like to do? Why are they inspiring for you?

4 thoughts on “My Inspirations for Location Independence”