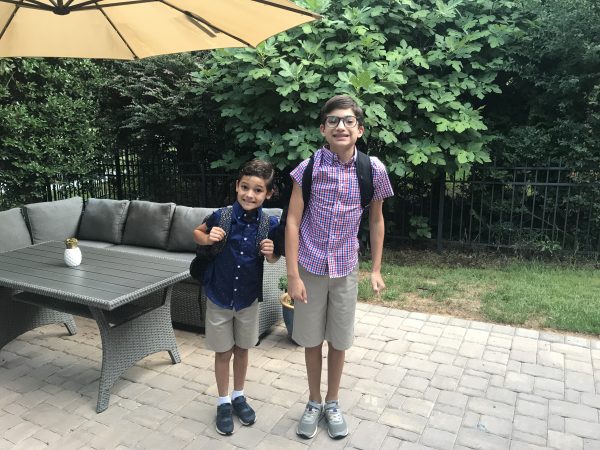 Last year was Junior ThreeYear’s first year of middle school. His middle school starts an hour later than Little ThreeYear’s school, so he would head to the bus at 8:40 each morning, then get home at 4:40 in the afternoons.

This system worked beautifully, since the bus stop was just a block from our house, except when the busses were late. Unfortunately, this happened with some frequency. I truly don’t understand why the bus company that the district outsources to can’t get its act together, but I don’t think they pay their drivers enough, so there are often busses that are tardy, bus substitutions, and, during the first week of school, busses that arrive an hour late.

Last year, when Junior ThreeYear was in sixth grade, we did not want to give him a cell phone. Knowing what we know about cell phones, we wanted to protect him as long as possible from the temptation to use a phone during his free time and get on social media. Especially after my experimentation with taking social media off my phone, I wanted to give my son as much social-media free childhood as possible.

Don’t get me wrong; I’m not a Luddite and I’m not one of those parents who eschews all technology. My kids have an XBox and a Nintendo switch and access to computers and TV.

But I feel that giving kids a cell phone too early is not good for them. I want to wait as long as possible to put an incredibly powerful and addictive piece of technology in my middle schooler’s life.

So last year, I sent Junior ThreeYear off to school with no cell phone. In general, the arrangement worked well. He tended to bring along actual books and read them on the bus, or borrowed a seat-mate’s Nintendo Switch (hey, sometimes there’s nothing I can do about technology access!).

The only problem I ran into was when the bus was late. There wasn’t a good way for him to get in touch. Sometimes, he’d borrow a neighbor’s phone and call me to let me know and sometimes, I’d call the school.

I also started to run into issues in other areas. He and Little ThreeYear took bike rides down our neighborhood trail, which was great. But they liked to get out at the end and go exploring in the woodsy part of the trail, and I didn’t love not being able to get in touch with them for over an hour (I know, moms these days…).

Or sometimes, I needed to get in touch with Junior ThreeYear about an after-school situation, and had no way to reach him.

That’s when my neighbor introduced me to the Relay. Her two oldest kids, both in elementary school, had Relays.

Relays are essentially long-range walkie-talkie devices that the kids carry with them to school. They connect to an app on parents’ phones, so if your child is trying to get in touch, it will come through your phone. You get in touch with your child the same way. The devices also have a GPS feature so you can track your kid.

They’re made and serviced by Republic Wireless, the same company that provides the great, low-cost cell service. I have not been compensated in any way for this review, by the way. I’m just telling you about something I bought and liked.

The devices cost about $50 each to purchase and cost $10 per month each to keep connected, so they’re not especially cheap, but they are problem-solvers for parents who don’t want to get their kids a phone but do want to stay connected.

Mr. ThreeYear and I debated the issue for a few months, then decided to buy both boys Relays for their birthdays in June (we decided to get Little ThreeYear a Relay as well so that his brother would have another person to chat with and so that when he went to tennis lessons, we could connect with him).

The boys were pumped with their Relays, and Mr. ThreeYear and I both downloaded the Relay app on our phones. I already had a Republic Wireless account, so I logged in to that, then set up two profiles for our account, Mom and Dad.

We set up three channels–Mom, Dad, and Everyone, so the boys could talk to us individually and collectively. The boys toggled between channels by using a button on the front of the phone.

The devices worked great when we first got them, inside the house. The boys would press a button, speak into the device, and we’d hear the answering call on our phones. If we didn’t have our Relay apps open on the phone, we’d receive a notification that someone was talking to us either on our phones or on our Apple Watch, and then we could open the app and listen to the message that they’d left (the app automatically records a message if you don’t hear your child live).

Unfortunately, when the boys took the Relays to walk the dog, they didn’t work. Ugh!

I connected with Relays’s customer service by clicking the “Help” question mark inside the app, and Relay troubleshot with me.

First, they sent me new SIM cards for the device because they thought that the devices weren’t working due to an issue with the SIM cards. We replaced the SIM cards, but that didn’t fix the issue.

I got in touch again, and they recommended de-connecting the devices from WiFi. Once I followed the steps they gave me to do that, the devices worked fine.

I really like the great customer service Relay provides. There are three US-based customer service reps (the service isn’t that big yet) and the guys are really helpful in getting your problems fixed.

My friend who introduced me to the Relays said she accidentally washed one of her devices, and they sent her a brand new one at no cost. She said she’s called in multiple times (she also had issues getting the devices to work in the beginning) and they’ve been great.

When we first bought the Relays, we just bought the devices for $50 each (I actually think they cost $49.99 from Amazon). When it was time for the boys to go to school, though, we decided we needed to purchase the additional bands.

You really need the bands for the Relays to be effective, in my opinion.

If your child wants to listen to music on his Relay, he’d need a band as well. The bands cost an additional $15 each.

So far, this school year, the bands have worked really well. The boys can only use them before and after school, but that’s the same rules they’d have with a cell phone, as well. They work great, once we got the connectivity issues figured out, and now it’s easy for one or both of them to let me know if they’ll be late.

I’ve even taken a Relay out on my runs and they work really well then, too. We make sure the kids have them on “Mom” or “Dad” channel, though, because otherwise, the message comes through to everyone, which is a problem if Little ThreeYear is talking to us when Junior ThreeYear is still in school (although he’s learned to turn his Relay off during school).

For now, this is a great solution for our family. We’ve told Junior ThreeYear that he can have a cell phone when he gets to Ninth Grade, but I’m grateful for this system in the meantime, to give him a few more years without allowing him to be on a cell phone.

What are your thoughts on kids and cell phones? Do you have any experience with Relay devices? What about other non-cell devices? Recommendations?