Do you love to travel as much as my family does? For some people, travel is icing on the cake. For others, like me, it gives me life blood and makes everything else I do worthwhile. Long week teaching? That’s okay; our trip in a few months will give me time to rest and see new sites. But how much should you spend on travel each year? 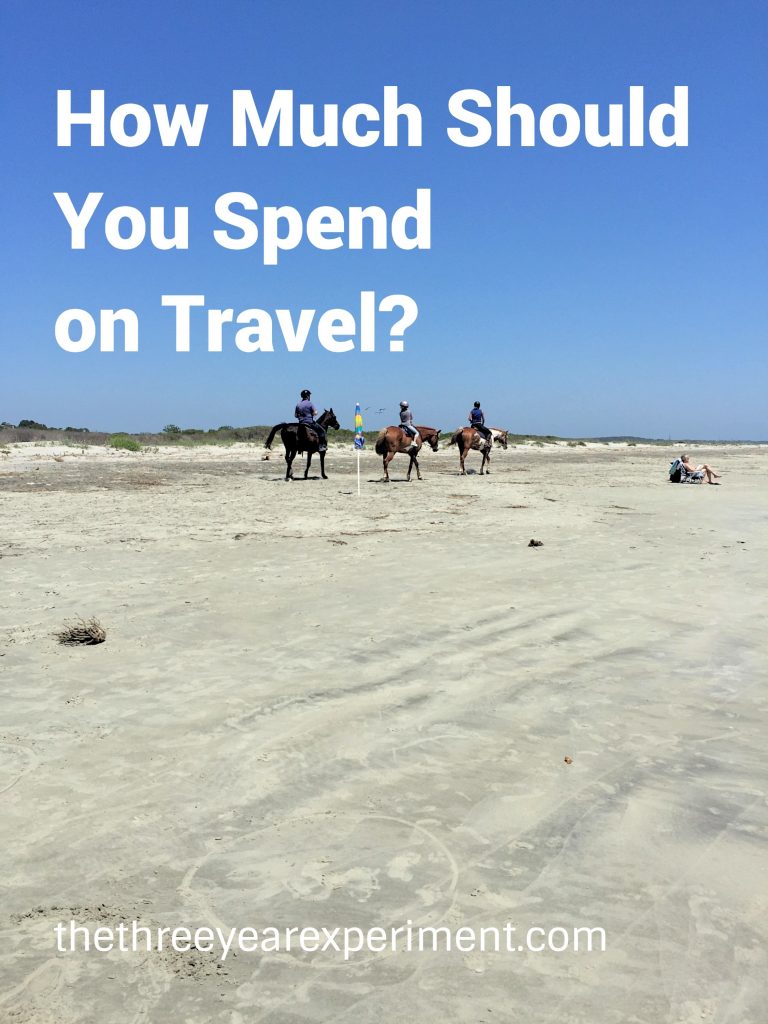 There are so many rules of thumb for other expenditures: 10% of your income on food, 20% on savings (ha! laughs the personal finance community–we know that number should really be 50-70%!), 10% to charity. But there are no good rules of thumb for travel budgets.

Like most expenditures, how much you should spend on travel is highly personal. If you’re still paying off debt, should you allow yourself to travel at all? How much debt do you have? Should you travel if you’re working towards early retirement? Let me just say, to get it out there, that I am assuming you’re able to pay for the vacation outright with cash. Putting a vacation on a credit card is probably about the worst idea ever (although Mr. ThreeYear and I did just that on our honeymoon to Greece. Yes we did. We were dumb).

Full disclosure: Mr. ThreeYear and I have always traveled, even when paying off our $38,000 of credit card and car debt. Because Mr. ThreeYear is from Chile, we always plan a big trip to visit his family every two or three years. And because we moved to New Hampshire several years ago, we plan at least one trip per year to visit my family in North and South Carolina. We also like to travel to places we’ve never been, so we plan occasional trips to cool places on other continents, too.

For us, travel is one of our top priorities.

But are there guidelines out there? How do you know if you’re responsibly spending? I asked myself this question recently, as we paid a deposit on an upcoming Disney trip, planned a side trip to the desert for our big trip to Chile, and decided how much it would cost to fly to the beach for Spring Break. Is the trip to the beach too much? We know it’s restorative to our souls and helps with depression during our long New England winters, but should we be a bit more fiscally responsible, even though we save a large portion of our incomes?

I did a bit of research, and found some numbers to help guide spending on travel. So, if you, like me, are unsure as to how much you can afford to spend on travel, read on:

As I surfed through subReddit on how much people spend on travel, answers were all over the board. People budgeted anywhere from $50/month to $18,000 per year (for a family of five). There were a lot of people who spent in the $5,000-$7,000 range and combine that with credit card points and rewards. People mentioned spending anywhere from 3% of their gross incomes to 20% of their total spending.

I prefer to figure our travel spending as a percentage of our spendable budget, or a total dollar amount. Both of these amounts are more useful to me than the percentage of our total gross income, mainly because we save so much of our income, our incomes may change in the near future, and our income today has very little to do with our income in early retirement or when we’re location independent.

On the BogleHeads forum, numbers were all over the place. There were people who spent $1000 a year for four people, and others who spent $35,000 for two on one vacation. $10,000 per year for two people was mentioned often. If I do a very unscientific estimate of the first several posters’ numbers, it looks like people spend an average of $2,740 per person per year on the low end and $3,330 per person per year on the high end (throwing out the outliers).

Ok, so far, I have pretty much no better idea of any types of guidelines for spending than I did before.

Lily at The Frugal Gene

Lily had a very helpful article that stated a guideline of 10-15% of your salary should go toward travel (I believe she was quoting Dave Ramsey, but I couldn’t find those recommendations anywhere on his site). Again, though, it isn’t clear if this means gross or net salary.

How much does the average American household spend on travel? The Department of Labor Consumer Expenditure Survey reports on average expenditures each year, which I’ve graphed for you below. These percentages are part of each family’s net spending, not gross salaries, for reference.

Obviously, no one has a clear rule of thumb for how much you should spend on travel. I looked up our records for the past few years, and here is how much our family has spent on travel for the past five years (with an income that has stayed relatively stable, give or take a few thousand):

2016: $7717 (two week trip to Southeast Asia for Mr. ThreeYear and me, month in South Carolina, trip to Seabrook Island)

Average over the last seven years: $6420.24 in yearly travel costs

A few notes about these numbers: they generally include airfare, transportation, eating out at our destination, since we don’t generally do that at home, entertainment, outings, guides, souvenirs. If we stay somewhere for several weeks, I’ll include grocery costs in our grocery budget, since we would buy those back home. We do not pay rental costs for a house at the beach because my amazing parents have always paid that cost for my extended family’s week at the beach. But all in all, these numbers are a pretty accurate representation of how much it costs us, all in, to travel.

After looking at the records and thinking about all the amazing trips we’ve taken, I’m surprised at how little we’ve actually spent on travel. For most of these trips, we’ve worried about how much we were spending, sweated the price of the airline tickets, and fretted about our travel spending. (One thing we don’t do: sweat expenditures while on vacation. We try to travel fairly frugally, eating in several times a day, borrowing cars versus renting, etc., but we do not pinch pennies on vacation. It’s our time to eat out and pay more for entertainment than we normally do, and we give ourselves permission to do so). But our overall spending is a very small percentage of our budget.

So How Much SHOULD You Spend on Travel?

Since the internet was not very specific about a final travel number, I’ll give you one: if you’re out of debt, spend up to 10% of your budget on travel (because, unless your income is really low, that amount will take you far, especially if you plan a couple of small trip during the year). And if you’re still in the trenches, paying off debt, but it looks like you’re stuck in the trenches for a while, earmark up to 5% of your budget to go see the world (or a nearby city within driving distance!). It’ll motivate you to keep going, especially when you can pay for your trip with cash. There’s something satisfying about being able to say, “we just paid for this trip in cash.”

Plan to earmark  10% of your spendable dollars to travel if

you’re out of debt, and 5% of your spendable dollars if

That’s Mrs. ThreeYear’s extremely unscientific methodology at work right there. But it all goes back to my philosophy that you should spend money on travel (if you want to, and if that’s one of your values). Give yourself permission to save up for a special trip. Let go of the guilt, and go enjoy yourself!

We’re heading out to Chile soon, so we’ll be reporting from the road. Au revoir, snow banks!

8 thoughts on “How Much Should You Spend on Travel?”