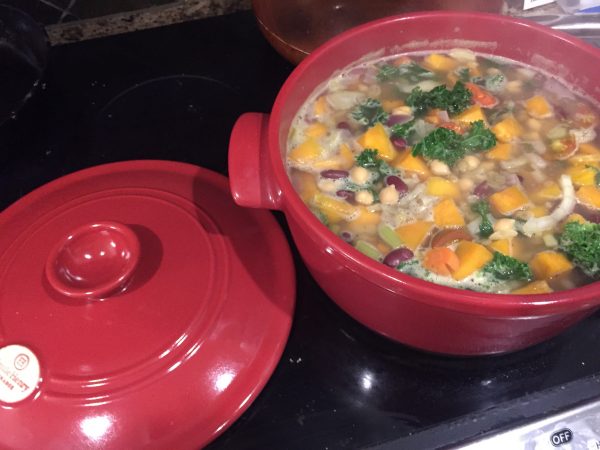 As I mentioned in my last post, this year I’m not setting goals like I have in the past. One of the reasons for this is because I’ve achieved a lot of my short-term and mid-term goals, especially the big ones (become location independent, fully fund our 401ks, get a job, get a dog).

This year, I’m more focused on tweaking the little, day-in and day-out habits that ultimately make life better or worse.

One of those habits that I’m tracking is how many vegetarian meals I eat per day.

Why am I tracking vegetarian meals? I’ve been an avid meat consumer since birth, and I’ve never, absolutely ever, been tempted to become a vegetarian or go vegan.

I’ve talked about the book before. It’s a cookbook written by Dan Buettner, the National Geographic researcher who coined the term “blue zones,” areas of the planet where the local populations live, on average, ten years longer than the people around them. No one knows exactly why that is–it could be close knit relationships, their propensity to move more throughout the day, diet, or a combination of many things (which is probably the case).

One datum that struck me, though, was that all of the regions ate vastly less meat than the general populations around them. Even the Sardinians, with their famous Mediterranean diet, only ate meat or fish about five times per month. A cardiac surgeon, member of the largely vegetarian Seventh Day Adventist group in Loma Linda, California, said he adopted a vegetarian diet after seeing the arteries of plant versus meat eaters. Plant eaters’ arteries tended to be clean and unclogged, while meat eaters’ were the opposite. This population has been studied at length, and the vegetarian Seventh-Day Adventists live longer, on average, than even their meat-eating Adventist counterparts (see here for more details).

I’m not trying to change your eating habits with this post. Food, and your relationship with it, is complex. What you eat is based on myriad factors, including where you were brought up, how food and special meals have factored into your life, and your long-established habits.

But I’m one to experiment a lot to find optimal arrangements, and it seemed like the time was right to experiment with eating more veggies. Plus, this arrangement seems to smile upon bread consumption. And I really love bread.

I read the book all the way through and experimented with some of the vegetarian recipes during break. Still, over the next few weeks, we’ve discovered some roadblocks.

Roadblock # 1: When I plan a meal in my head, it starts with meat.

Like most Americans, I think of meat as the centerpiece of each meal, especially dinner.

When I began to think about what to feed my family, especially for dinner, I had a hard time coming up with dinners that I felt would be substantial enough AND be vegetarian.

I’ve started researching and following good sites for veggie-based meals. A lot of those meals are soups, especially now, in the thick of winter. Here are some of our favorites:

If you don’t feel like you’re full enough after a veggie meal, try adding more beans to your meals or include bread. I’ve been making a lot of sourdough breads, and this naan recipe is so good.

Roadblock # 2: I have to fight the thinking that if I don’t eat meat each day, I’m not getting complete nutrition.

Or flavor. We just punch up the spices and olive oil, and flavor has taken care of itself. And the more statistics I read about the longevity of vegetarians, the more I realize that I have been incorrect about not getting enough nutrients. We try to include beans with at least one meal a day. While it might take a few weeks for your gut to get used to so much extra fiber (it did for mine), in no time at all your body will adjust.

This roadblock is really a problem with my thinking, so I’ve been working to read more about eating vegetables to encourage myself that we’re on the right track. Unlike when I was on the Whole30, I see no change in energy levels.

Picky eaters. They are tough, aren’t they? We want our kids to get enough healthy food to eat, but new recipes can make that difficult. Little ThreeYear shies away from anything new that I serve.

Luckily, I have a few go-to recipes I know he’ll eat. He loves lentils, so we have those at least once per week. He is required to try any new recipe (2 or 3 “bunny bites”) and then, if he doesn’t eat it all, I’ll usually make him a black bean quesadilla or some other go-to food. It’s not ideal, but it’s life.

Here are some solutions I’ve been implementing to include more veggies in our diet and decrease our reliance on meat.

Wow, Laurie, what a radical idea. How many times do I propose this solution? As many times as it will take to get myself to 100% adopt it, each and every week of my life. Making a meal plan and shopping for that plan makes our eating so much easier. I only really need to plan for about 5 meals and plan to eat leftovers for the other 2 meals.

I’ve been batch cooking a little bit, too. Roast a pan of veggies covered in olive oil at 400 degrees for thirty minutes. Then, use them to make a roasted veggie salad over kale, a roasted veggie soup (puree them and add milk), a frittata, or a pasta salad.

Solution #2: Eat the same thing every day for lunch

This might be a terrible solution for some, but for me, eating the same meal each day for lunch is comforting and delicious. My taste buds salivate in thinking about my salad with olives, chickpeas, perhaps a sprinkle of fresh herbs or cherry tomatoes, and homemade vinaigrette.

I’ve added a Nature Valley Protein bar (190 calories) because then I’m not ravenous when I get home from school.

I make my salads in batch at the beginning of the week and they hold up pretty well in the fridge all week. It’s one less decision and one more prep to make the week easier and my vegetarian eating more automatic.

We add a salad, and boom, there’s a vegetarian meal. We throw some of those roasted veggies on them if we have any left.

Our family is after progress, not perfection, so for our New Year’s Day meal, our black beans had bacon (you know–traditional Southern meal of Hoppin’ John and collards? Yum…). I’ve eaten tuna fish with my salad a couple of days during lunch. We ate a pepperoni pizza the other day, and wolfed down some delicious salmon when we went out to eat with my mom at dinner.

But, we’ve also tried to make mostly vegetarian meals for dinner. We’re adopting the mindset that it’ll take a while to get great at meal planning. We’re working on slowly adopting new recipes and know it won’t happen all at once.

I haven’t missed meat. Not that I’ve totally eschewed it. I’ve eaten tuna fish a handful of times, pepperonis, and salmon since the beginning of the year. But so far, I’ve figured out ways to make dinners that don’t feel like they’re missing something.

Time will tell how we do with this experiment/lifestyle change, but I feel good about our nutrition in the coming year.

What are some lifestyle tweaks you’re trying in 2020?