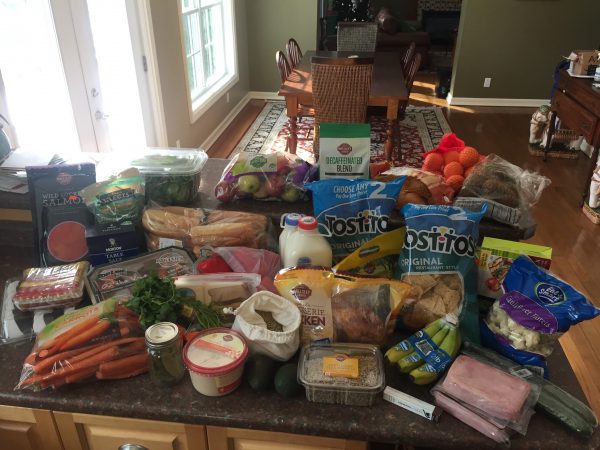 Well, well, well. It seems I have FINALLY managed to stay within a $600 per month grocery budget for the first time in recent memory.

You may be shouting, “amateur!” I don’t care. I have never been able to figure out how to reduce this expense until now, and I am PROUD of myself.

How in the world did we manage to HALF our grocery budget in the space of two months?

Well, if you want the short answer:

If you want the long answer (which, I think you do, because, come on, who wants a one-sentence answer when you can get something long and complicated?!), then read on.

Here’s What I Did Differently

I changed my behavior somewhat (though not a ton) to be able to stay in my grocery budget. As I mentioned, budgeting weekly has been a game changer. Having those artificial parameters around my dollars has helped me see that I have a finite amount of money for this week (but it’s okay, because in seven more days, I’ll have more).

I’ve also been way more dedicated to meal planning. We’re not eating gourmet meals, but I just make sure that I have a meal plan for every day of the week before I go to the store.

Here’s my fairly quick process before I go to the store.

1. I Check My Fridge/Freezer/Pantry and Update My Meal Plan.

Here is my Meal Planner that hangs on my fridge (fancy, right? I think it came from Staples or Target and cost $5).

I decide what meals we’ll have for the week. Usually, I check out the freezer and see what meat we have (our experiment to eat all vegetarian fizzled out about the time we went into quarantine). Then, I Google recipes or check my recipe binder, or just search my memory bank for something we could have for that ingredient. Budget Bytes is a great resource too.

The idea is to find a recipe that requires mostly ingredients you already have on hand.

Wednesday-Sausages and bean salad with corn

Here’s how I came up with that meal plan.

“We have grilled chicken, and that’s easy on the weekends. So we can grill chicken and roast the other half of the bag of frozen veggies in the freezer.”

“Do we have enough stuff for pasta salad? We have pasta, kalamata olives, a can of beans, but we don’t have feta or cherry tomatoes. Add those to the list.”

“Corn is on sale. We should eat that with something fast. We had beer brats last week and they were a hit. I will do that again.”

“I am starting work this week. I will be exhausted on Friday. Let’s get a heat up pizza for Friday.”

“I have a frozen pack of hot Italian sausage. What could I make with that? I have a ton of canned corn, beans. Bet I could make taco soup. I will need to buy an envelop of taco seasoning. I see that Queso Fresco is cheaper than Feta. I can substitute that in the pasta salad and buy it for the taco soup too.”

“This recipe for taco bowls looks good. I can buy two envelopes of taco seasoning and cauliflower is in season right now, so I will make that.”

This meal plan is not particularly impressive. It includes way too much Mexican, corn, and beans. But that was on my mind as I planned and it worked out that way. My family ate everything and didn’t complain (except for Leftovers Night–Mr. ThreeYear hates to eat leftovers).

2. I Make my grocery list and add approximate prices.

This week I shopped with Walmart Pickup, so it was easy to know exactly what I was spending. I just used the app and added all the ingredients I needed to buy for my meal plan.

Then I added the typical weekly ingredients we need. Yes, I have to pick and choose a bit. I can’t buy QUITE as much as I did before when I spent $1250+ per month. But, I can buy almost as much, and make some treats from scratch.

I have primarily shopped at Aldi, Wal-mart, and Costco since drastically cutting my budget. I have picked up one or two cheap meats at Food Lion and cheap fruits at Harris Teeter, but other than that, I stick with the low-cost leaders.

3. I Use the Weekend to Make Two Homemade Treats

I have started making two treats from scratch each weekend. Actually, Mr. ThreeYear has started making bread from scratch (yum!!!) and I usually make a batch of muffins, homemade granola bars, brownies, or some other treat that we can eat for breakfast or after-school snacks.

This seems to fill in the gap of the extra processed food I’m not buying each week.

Here’s What I DIDN’T DO

Ok, I think one of the most helpful things to share would be the things I didn’t do during the second half of July and August, when we successfully stayed in our grocery budget of $600, or $125-$150 per week (depending on if the month had 4 or 5 weeks).

1. We didn’t go to the grocery store more than once per week.

By and large, I made one large shopping trip per week, and once the food was gone, it was gone, and we had to make do until we went to the store again. If I ran out of an ingredient (like we’re currently out of salt so we have to use the kind you grind until it’s grocery day) we just made do.

This has meant we have a shortage of fruit in the house from, say… Saturday until Friday, the day I go grocery shopping again. When I say a shortage of fruit, I mean that we still have some boring red apples and bananas that are a little soft, but the nectarines, berries, and oranges are gone. Little ThreeYear could subsist on fruit alone.

2. I didn’t set foot in Costco without a short list and lots of self-control.

I did go in to Costco a couple of times, but only with a very specific list, coupons already clipped in the app, and a stern rejoinder to Mr. ThreeYear that we were only buying what was on the list.

I ended up spending less than my food budget during Weeks 1 and 2 so that I could pay for a $90 trip to Costco in Week 2.

That gave us the ability to get tons of snack sized chips, Smart Pop, and fruit snacks at Costco, plus some coffee, giant bags of limes and lemons and supplies like Dawn, dishwasher tabs, etc.

I’ve spent the majority of my adult life spending way more on groceries than this (and I have the data to prove it!) so I knew that without deliberate, thoughtful choices and a plan, we would overspend at the store.

I don’t go to the store hungry.

I don’t go to the store without a meal plan.

I don’t buy without inventorying the food I already have.

I DO shop weekly.

When I plan for my weekly shopping trip, which I’ve started doing on my Notes app, I add the approximate cost of the items I’m buying. This is half of my list below for Aldi.

I also use the Walmart app for pickup. I haven’t been super satisfied with the Walmart pickup lately, mostly because they’ve been out of half of the items I order, and who wants frozen drumsticks when you ordered boneless skinless chicken breasts (they sometimes substitute random items)?! But, then again, people are picking out my groceries for me for no additional cost (hat tip, Dad), so it is uber convenient. And sometimes, Aldi doesn’t have certain items that Walmart does have.

I know I was able to change my behavior so much because I really focused on it during the second half of July and all of August. I was out of school and had lots of time to devote to YouTube videos of Mormon women (Frugal Fit Mom and FunCheapOrFree) who fed their families on the cheap (I don’t know–the LDS women just seem to be really good at pinching those grocery dollars!).

Now that school is back in session (and yes, the private school where I teach is in-person half of the time and virtual half of the time. And yes, it is twice the work, thanks for asking), I have lots less time to devote to groceries.

I can tell that it’s getting harder, because we’re starting to waste a few more food items than we did in July and August, where we got really good at using up everything in the fridge.

But, I am committed to staying the course with our new budget, so I’ll keep posting about how I will make it work while I work and while we have less time to prep and think about food.

Alright, let’s hear from you. What’s your grocery budget? How many people in your family? How many hungry teenaged boys?