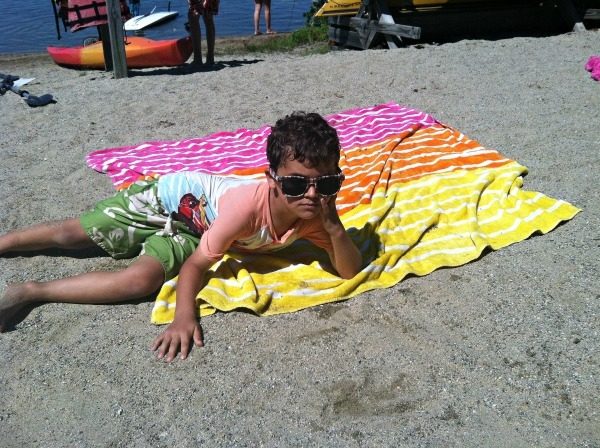 I live in a land of achievers. Our nation of immigrants has come scratching and clawing their way to a better life, risking everything to work hard so the next generation has more.

Or at least that’s the narrative. I grew up hearing stories of my immigrant great-grandfather, a Russian Jew who entered Ellis Island alone at nine years old to escape the Czar’s army. He somehow managed to survive living in NYC’s garment district and selling newspapers, relying at least once on the kindness of a stranger’s $5 tip to live through the winter.

As a young man, he moved to South Carolina, married a Gentile, had four kids, the youngest of whom was my paternal grandfather, and opened a successful clothing store. Like many second generation Jewish children, my grandfather, and in turn, my father, went into medicine.

I grew up in a Type A, achievement-oriented house. I was never overtly taught to set goals. It’s just embedded in both my DNA and my conditioning.

In this blog, I regularly share both my process for setting goals and my progress, updating you on how I’m doing with these arbitrary measures I’ve set for gauging my life’s work.  There are plenty of times in life where I haven’t set goals, namely when I was living in Chile as a 20-something and right after I had kids, when the biggest goal I could muster was to survive the day. Even then, I started working with a MLM company shortly after and set goals out the wazoo.

The times when I didn’t have goals feel, in hindsight, like wandering, anchorless times. At the end of my stay in Chile, I became incredibly disillusioned because I was so ready to move back to the US and get on with life.  Never mind that I was busy living it in Santiago.

While goal-setting has helped me put some parameters around a mind that’s particularly good at planning for the future (which is what Martin Seligman says distinguishes us from other primates), has it increased my happiness, as I like to think, or has it promulgated a restlessness, a longing for more, that has undercut my ability to appreciate the here-and-now?

When school starts in two weeks, my boys will go back to school and I’ll be officially not working (because playing cruise director with two kids and a puppy is decidedly NOT not working).

And I’ll be left with time to fill. My first inclination will be to put some parameters around this time, to give myself some goals so that I don’t waste even a half hour of my time.  But is that wise? END_OF_DOCUMENT_TOKEN_TO_BE_REPLACED