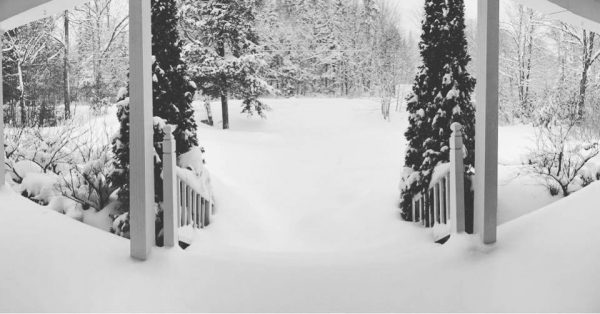 If you’re just joining, our family of four is on a three-year journey to double our net worth and become location independent so we can move abroad. Each month, I’ll keep you apprised of our progress. This year, we’ve got some major goals, including paying off our outstanding debt (car and apartment in Chile), replacing our roof, AND saving around $70,000. (Wow, that is scary to type all those goals out in one place). In January, we made some solid progress toward those goals, and got 7% of the way to doubling our net worth.

Ah, February. Month of heavy snowfall and rampant sickness in the ThreeYear household. During the four weeks of February I took on a new side gig, we went skiing a few times, I took some more toys out of my kids’ rooms, and we reminisced about all the financial mistakes and gaffs we’ve made along our financial independence journey.

The ThreeYear family’s plan toward location independence marched forward, relatively unimpeded by snow or stomach bugs.  This month wasn’t a particularly big month for gains. Mr. ThreeYear maxed out his 401K, we made steady progress on paying down our debts and saving up for a new roof, and we also paid for a repair on the house, to the tune of $1,200.

Thanks to solid stock market gains, our total net worth is up 2.4% over last month. Where does that leave us in our goal to doubling our net worth?

Well, since the beginning of this year, we’ve made 9.2% progress toward our goal. Last month, I calculated that we’d need to make 2.77% progress each month to double our net worth in three years (or, hit 1/3 of the way there by December, to put it another way), but we know that progress won’t be completely linear. We only made about 2% progress this month, but I expect that in April, we’ll make a big jump in progress since that’s the month Mr. ThreeYear gets his annual stock shares from his company.

We also expect to supercharge our savings rate next year, when the mortgage on our apartment in Chile is paid off, which we plan to do by the end of this year. That will allow us to start a taxable retirement account and hopefully funnel lots of money there.

(Since we just got started on our journey to double our net worth, there are only two months of results here).

And here’s our spending. Putting this out here but it’s really scary. We’re a spendier family than the FI-norm, and this month was spendier than usual, thanks to a home improvement project, pre-paying the kids’ summer camps, insurance, and new brakes for my Accord. Feast on these plump numbers and feel good about your own spending, I say.

*A couple of things, such as our charitable contributions, aren’t included in this total, mainly because we hope to create a Donor Advised Fund once we move abroad.

And now, to March!

February is now in the books and we’re cruising into March, replete with time change, colder temps (here in New Hampshire, strangely) and optimism for the future! See you next month!