Goals are great, right? They help us focus, give us purpose, and give us something to work for. But, there can be a dark underbelly of too much goal setting.

When you set a goal in your life, especially a goal for financial independence, it’s easy to let it take over your life. Sometimes, we get so caught up in what’s next that we forget about what’s now. We’re so focused on our future happiness (because why else are we setting the goal, after all?) that we forget about our present happiness. So what’s the magic balance? 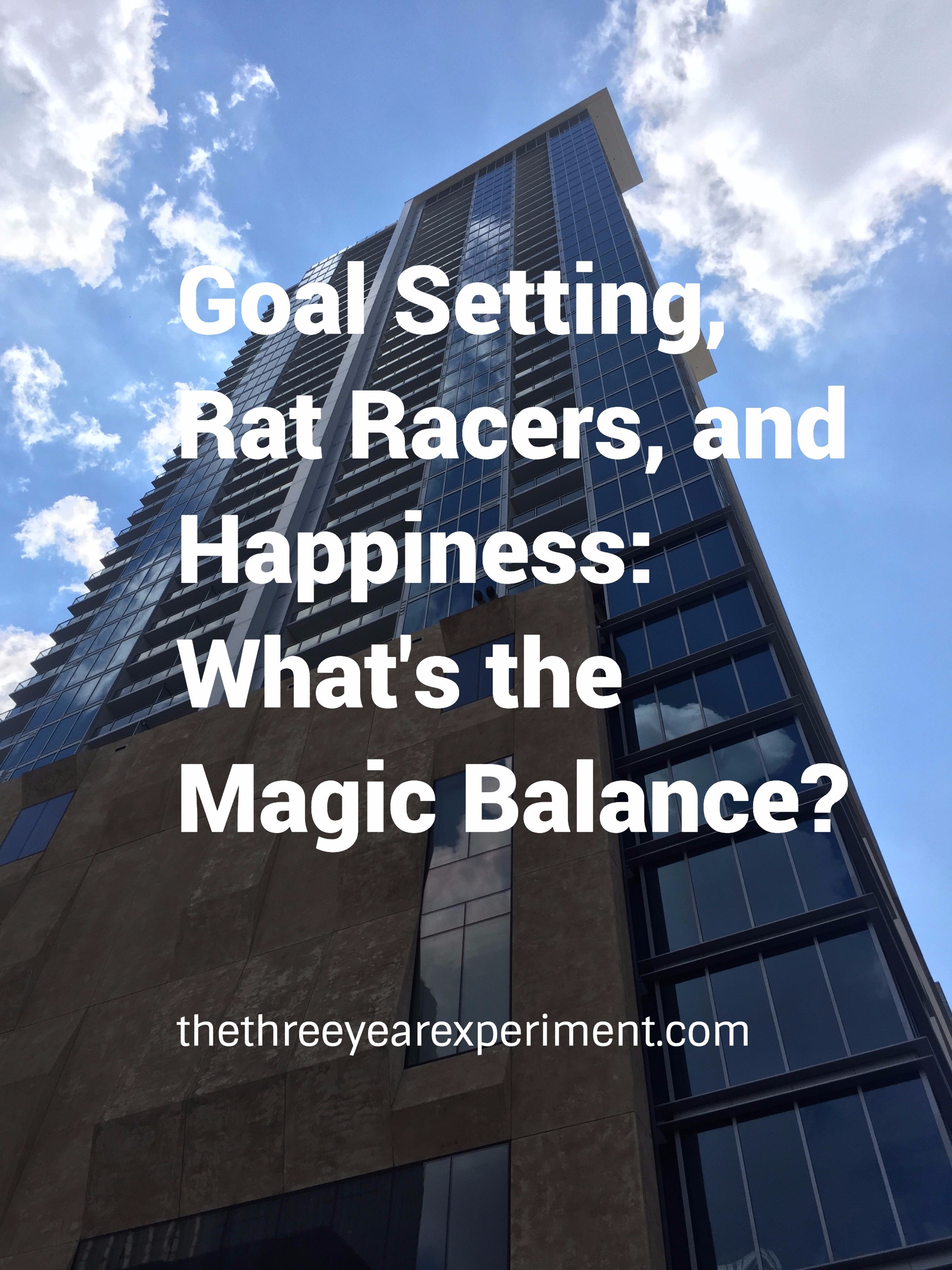 I read a book this weekend that brought the idea of getting too caught up in the future into clear focus.

The author, Tal Ben-Shahar, who wrote the book Happier, has come up with a quadrant of four archetypes for how people approach happiness.

Some people enjoy the present, to their future detriment. They live for the moment, indulging in rich food and drink that will later cause weight gain and fatigue. They engage in behaviors that bring them pleasure now, like watching TV, with little regard to future costs, like not having their work done. These people he calls Hedonists.

The second archetype subordinates the present for the future. She goes through life thinking, “I’ll work hard and get good grades now, so I can go to a good college.” Then in college, she does the same thing, in order to get a good job. She secures a job she doesn’t like, just to make a lot of money and buy fancy cars and houses. She subjugates her present happiness, year after year, for some mythical future happiness that never arrives. This type of person he calls a Rat Racer.

Finally, there’s the person who engages in activities that bring her enjoyment in the present but only those activities that will also lead to a fulfilling future. She picks fulfilling, enjoyable activities with an eye on both their short- and long-term utility in her life. This person embodies the Happiness archetype.

Dr. Ben-Shahar, who lectures at Harvard and is one of its most popular professors, calls his model the Hamburger model, since he took his inspiration from four hamburgers. The hedonist is represented by a fast food burger–delicious now, makes you feel sluggish and gain weight later. The rat racer is represented by a veggie burger. Tastes bad now, but good for you in the long run. The Nihilist eats a “worst” burger–it tastes bad now AND is bad for your health in the long run. Finally, the Happy person eats an ideal burger. It’s tasty and healthy.

What does all of this have to do with financial independence? Often, in the early financial independence world, we can set such high goals for ourselves for early retirement that we do so only with an eye for the future, while subjecting ourselves to unnecessary present detriment. It’s a charge that’s been levied against our community by people like Ramit Sethi, who claims that our entire community is a bunch of Rat Racers, slaving away today in jobs we hate for future gain. While that’s a ridiculous claim for everyone in early retirement, and obviously patently untrue for bloggers such as Mr. Money Mustache, there is a kernel of truth to it for some of us.

While I was listening to Dr. Ben-Shahar’s books, as I was folding laundry and preparing for another killer week at school, I felt the truth of the Rat Racer archetype in my own life. Our family has set a huge goal for ourselves over the next three years, that of doubling our net worth and achieving location independence.

In order to make that goal a reality, we’ve worked on increasing our incomes and saving more. I took on another job last year, and I’m also in my final year of a Master’s program. Mr. ThreeYear is working extra hard in order to secure another “Exceeds Expectation” designation, so that he can get the highest raise possible at his job. We’re currently working on cutting out most eating out, we’ve gotten rid of ongoing expenses like a regular housekeeper (I know that sounds like a first world problem but a clean house is important for both of us), and we’re socking away as much as we can in our saving and investing accounts.

Are we enjoying present benefit from all of these changes in our lives? I’ll be honest. It doesn’t feel like it right now. My schedule this year has been really hard on me. It’s hard to work at two schools, I feel like I’m racing through every minute of every day, and as soon as I’m done teaching, I pick up the kids for after school activities or homework. I know part of this rat racer feeling is transition–the start of the school year is particularly difficult in my profession. ESOL Teachers have a lot of testing to do in the beginning of the school year, and additionally, on Saturdays, I’m taking a graduate class so that one of my weekend days is eaten up.

I’m also not sleeping enough. I’m writing blog posts or training for a half marathon during the mornings, and that means a wake up time of 5am. Since I need at least eight hours of sleep, and preferably nine, it means I should go to bed between 8 and 9pm. But I don’t.

But Laurie, you might be thinking, isn’t it important to set goals and achieve them? After all, the secret of the Marshmallow experiment is delayed gratification–the most successful kids later in life are the ones who find a way not to eat the second marshmallow when the researcher leaves the room. It seems like we teach children this archetype growing up–you may hate school, but buckle down and get good grades so you can get into a good college later, get a good job later, be happy later.

Yes, I think it’s important to set goals and learn to delay gratification. After all, I get a huge amount of life satisfaction from achieving my goals. And if we never learn to wait on some of the things we want in life, we’re just hedonists. But when you’re on the road toward financial independence, it’s easy to get so caught up in your goals, that you forget to pick the choice that brings happiness now and later.

Our Next Life writes about getting so focused on their early retirement goal that they almost burned out last year. Their answer was to tweak their plans and spend a bit more on their present happiness.

Mrs. Adventure Rich talks about enjoying retirement now. She makes the excellent point that if we’re always thinking about the future, we forget to appreciate what we have now.

Why don’t we teach kids about being happy now and later? Why don’t we pick the goal, perhaps a bit farther out, that allows us to enjoy life now and be financially independent later?

My favorite habit of the 7 Habits of Highly Effective People is the win-win habit. Stephen R. Covey’s site spells out the thinking behind win-win:

“Think Win-Win isn’t about being nice, nor is it a quick-fix technique. It is a character-based code for human interaction and collaboration.

Most of us learn to base our self-worth on comparisons and competition. We think about succeeding in terms of someone else failing–that is, if I win, you lose; or if you win, I lose. Life becomes a zero-sum game. There is only so much pie to go around, and if you get a big piece, there is less for me; it’s not fair, and I’m going to make sure you don’t get anymore. We all play the game, but how much fun is it really?

Win-win sees life as a cooperative arena, not a competitive one. Win-win is a frame of mind and heart that constantly seeks mutual benefit in all human interactions. Win-win means agreements or solutions are mutually beneficial and satisfying. We both get to eat the pie, and it tastes pretty darn good!

A person or organization that approaches conflicts with a win-win attitude possesses three vital character traits:

Making choices that give us present happiness and future gain mean understanding our deepest values. And sometimes picking a happiness choice means a bit of discomfort at first, but eventual satisfaction.

For example, when I climb out of bed in the dark, cold morning to go on a run, it’s a bit painful at first, but as I run by the lake, watch the sunrise, hear the loons, and feel endorphins fill my body, I’m feeling present pleasure and receiving the future benefit of a better mood all day.

When I drive the boys to swim lessons, which are far away and expensive, I am sacrificing some future gain, in the terms of money and time, for their activity. But seeing the thrill of being in the water for both of them inevitably brings a smile to my face every single week, and I know that the swim lessons will mean they’re more likely to keep swimming for the rest of their lives, something that brings both kids pleasure.

Making the right choice comes down to knowing your values. For our family, we value family, travel, and financial independence. Of course we value more things than that, but by identifying our top three values, it makes it easier to make choices for our time.

Am I a Rat Racer?

After I listened to Happier, I asked myself, “Are we rat racers? Are we living only for the future at the expense of the present?” It’s a good question to take time with. Because while I know that we are definitely making decisions that bring both present and future happiness, we’re also probably making some decisions that aren’t. And thinking about each activity our family engages in, especially at the start of the year when things are so busy, with the happiness archetype in mind, can help us figure out what needs to stay and what needs to go.

Finding the magic balance between present pleasure and future gain is definitely a balancing act.

Have you found yourself embodying different archetypes at different times in your life? (I’ve definitely been on the rat racer track a time or two). I’d love to hear the details!