If you’re just joining, our family of four is on a three-year journey to double our net worth and become location independent. Each month(ish), I’ll keep you apprised of our progress. This year, we’ve got some major goals, including paying off our outstanding debt (car and apartment in Chile), replacing our roof, AND saving around $70,000. As of August, we were roughly 21% of the way to doubling our net worth.

After an unusually warm spell, we’re finally getting the insanely gorgeous leaves New England is known for. As I drive to and from work, I’m privy to the most amazing shows of reds on the trees. 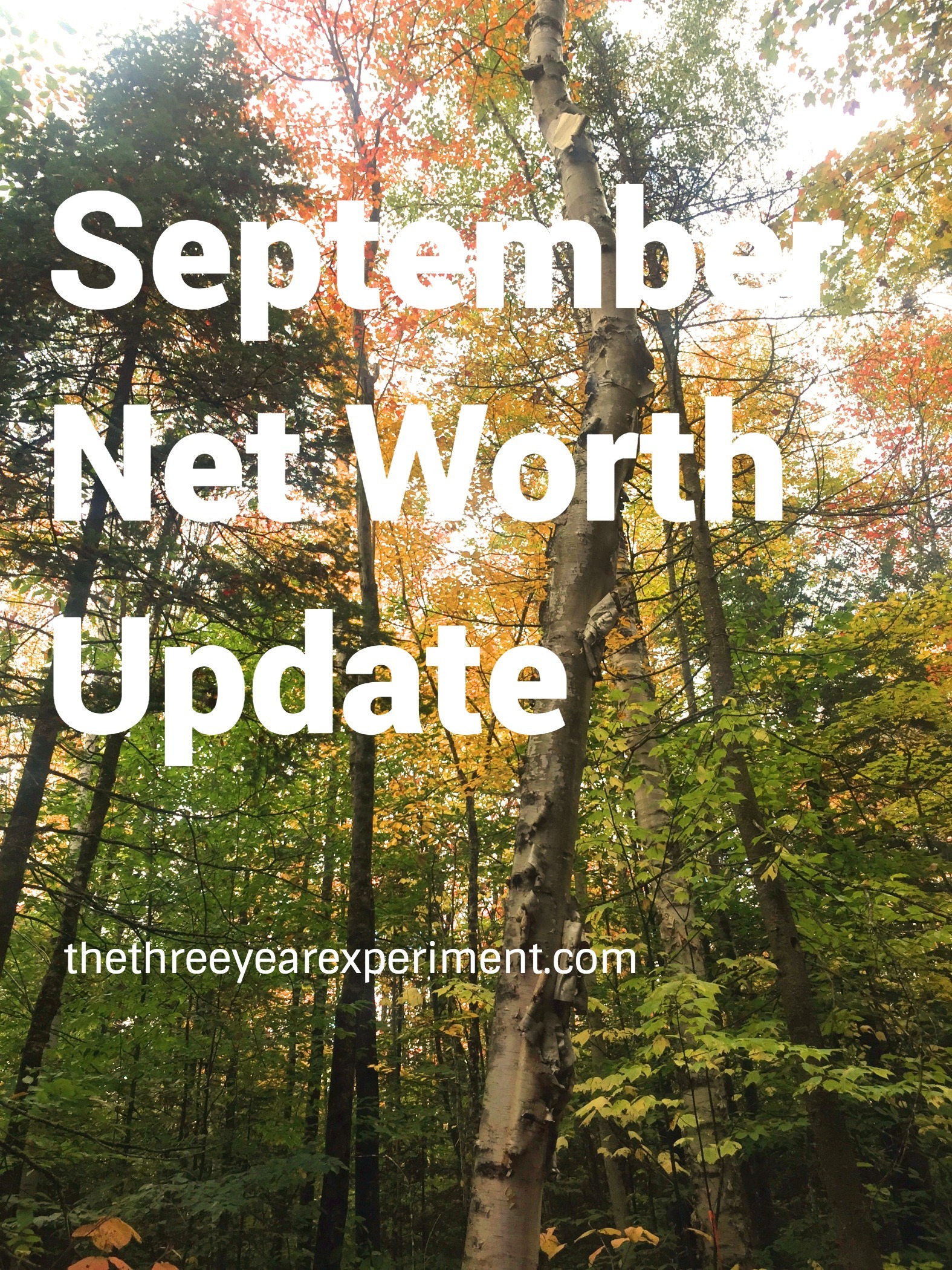 We’re well into the school year. The Junior ThreeYears are adapting to their new classes and homework. I keep adding more students that I need to work with to my schedule, so I’m less and less part-time. I’ve literally used up all my hours in the school day and will now be eating lunch while working with a student. At least I’m paid hourly!

One of the highlights of the month was my first solo girls’ trip in something like ten years. I met my best college friend at my sister’s house in Charlotte and we spent the weekend perusing a local farmers’ market, checking out local dining and brunch options, and catching up. I had such a great time that I vowed to take more of these trips. The best part was, Mr. ThreeYear and the boys had a wonderful time together at home. They went to the movies, went out to lunch at their favorite Mexican restaurant, and had a great time bonding while I was away.

We spent gobs of money in September. Our biggest purchase was our tickets to Chile. Our plan was to buy them with airline miles, but in the end, we decided against that. Mr. ThreeYear wanted to go during Christmas and New Year’s, so it would have taken an insane number of miles for each ticket (something like 120,000 each). We didn’t have enough for four tickets and we thought it made sense to save them. Our second biggest purchase was my master’s course. I have three more to go after this. And I had to pay quarterly taxes as well, although those numbers don’t show up in our spending report. Since I’m working so much this year, I’m setting aside 20% of my paychecks for taxes. I may start setting aside 25%, just to be safe. It’s hard to know exactly what I’ll owe since the amount of money I make varies so much, so it’s better to play it safe.

The stock market is still bullish, and we’ve seen our net worth rise again, despite our massive spend this month. It is nice to be earning a paycheck again, so we can reach our end-of-the-year-goals faster. I’m also so ready to be done paying off our apartment in Chile and our car that I’m wishing December was already here. Wait, didn’t I just write a post about staying in the present?

As of September 30th, our net worth has increased by a total of 22.8% (which I rounded up to 23% for our chart!) from our starting point in December of 2016. In order to hit our goal of doubling our net worth in three years, we’ll need to increase our net worth by an average of 2.77% each month (or increase it by 33.33% by December), but we know that progress won’t be completely linear. Our net worth increased 1.8% from last month, but we hope the increase in the last quarter will make up for that, when we pay off our last two debt payments with an end-of-the-year bonus.

I don’t know if we’ll hit the 33.33% this year, but if we don’t I still feel okay about it, since this has been a heavy year of paying off debt and we’ll have a higher savings rate next year. That will allow us to start a taxable retirement account and hopefully funnel lots of money there.

As I mentioned above, we had a lot of large variable expenses in September, but we kept our recurring expenses fairly reasonable compared to our averages.

Housing: $2275. This includes the house mortgage (15 year mortgage) and the apartment in Chile.

Gas: $220.59. This was a bit higher than the summer because I’ve been commuting to work.

Groceries: $866.54. This includes trips to farmer’s markets and regular groceries, and is still lower than our average. We keep working to bring this category down.

Home Goods: $60.87. Stocking up on cleaning and home supplies.

Eating Out: $88.55. Mr. ThreeYear took the boys out to Mexican twice, and we bought two fast food dinners for the boys. We’re working on drastically cutting our expenses in this area.

Kids’ expenses: $361.13. Swimming lessons, tennis lessons from the summer, books (which I usually don’t buy but I stocked up for the year), pre-paying school lunches and two after-school care days.

Babysitter: $40. I paid a babysitter for a day of back-to-school prep I did.

Camp: $203. A downpayment on a week of summer camp for Junior ThreeYear.

Entertainment: $62.23. The boys went to a movie while I was visiting my sister and we bought a movie on iTunes.

Mrs. ThreeYear’s spending: $335.85. High this month because I took out spending money for my trip, paid for a fall half marathon, and bought yoga lessons for the fall. I’ve really enjoyed the extra flexibility I’m gaining.

Haircare: $22.95. One cut for Mr. ThreeYear. The boys’ hair is really long because we had to cancel our appointments in September.

Home Maintenance: $117.99. Our monthly curbside compost service ($20) and paying our neighbor to mow the lawn several times (to give him a chance to work).

Vacation: $5194.56. Four plane tickets to Chile plus two meals when I visited my sister. We’re visiting our family in Chile in December.

Total: $13137.02. Whew! Those tickets and my class really increased our monthly spending. We spent $6168.91 without those two categories.

Even though we spend more than the average FI blogger, over time, those numbers have consistently decreased as we’ve become more efficient with our spending. Read more about how we’ve built a nice nest egg despite lots of mistakes and a late start here. (Part of our success comes from keeping spending low on our housing and cars).

October has proven amazing so far. This weekend, although rainy, has given us a spectacular leaf show. I have wished to be able to capture the beauty of simply driving down the interstate these last few days. The bright red and yellow trees are breathtaking. I went on a trail run yesterday in my neighborhood and took mental snapshots left and right. Overhead were a canopy of golden and fiery red leaves. On either side were time-worn stone walls built by sheep farmers in the 1800s. The trail was covered with yellow leaves to cushion us. My running partner told me that wild board and moose regularly visited the trail to graze.

As always, we’re optimistic for the future. We know that winter’s just around the bend, and the next few weekends will be spent bringing our outdoor furniture in, readying our flower beds for winter, and other preparation activities. We’re looking forward to the final quarter of the year, as we’ll finally reach the last of our yearly goals and pay off two big debts. And we have a really fun trip to look forward to–not only is going to Chile in December great because we’ll celebrate Christmas and New Year’s with family, but it will also be summer there, so we’ll get some bonus warmth for a few weeks! Until then, we’ll be working, studying, schooling, and saving!

11 thoughts on “September Net Worth Update”