Last week, I decided to talk to one of my English Language Learner students about his job prospects. He’s in ninth grade, and just arrived from Vietnam last December. He’s made great progress on his English, although he is still reticent about speaking in his general classes. But he’s a jokester at heart (he likes that word) and we always have lots of fun in our classes. 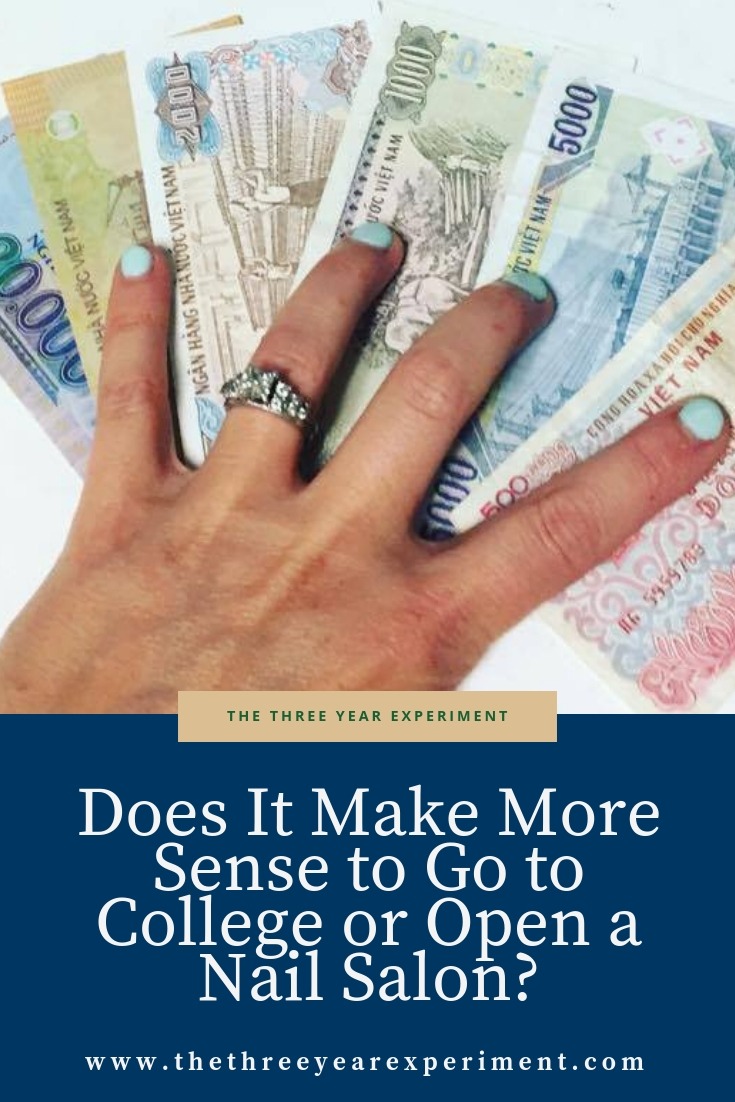 His mother, like many Vietnamese immigrants to the US, works in a nail salon. I have talked to my student about this many times, but I, being his “well-educated” teacher, wanted to officially broach the topic of his prospects after high school. Several teachers and I had discussed how we wanted him to have more lofty goals than working in a nail salon his whole life. I wanted to expand his horizons.

Turns out, he had some things to teach me.

First off, a peak inside my head: “successful,” according to me, means having my kids go to a four-year university. If it’s Ivy League, that would be amazing. Mr. ThreeYear and I plan to pay for the majority of our kids’ college, so we’re looking at the majority of $45,000+ a year (currently!) for four years, the average total cost (tuition, fees, and room & board) for a private college, times two.

Then, they’ll graduate, study medicine, law, architecture, or engineering, get a great job, and change the world!

I wanted my student to know that he could and should! expect more from life than working in a nail salon. “I don’t want to work in a nail salon,” he said. “But… you can make a lot of money there. My mom,” he told me, “can make $1800 a week in the nail salon.”

I had just come face to face with immigrant philosophy. And it was about to remind me why we need to have our assumptions challenged.

My student has a large Vietnamese family who lives all over this country. He does not come from a wealthy family in Vietnam. Most of his extended family are farmers or traders. But after the Vietnamese war, many relatives immigrated to the US and have set up their families here. And they set up their own businesses–nail salons are a favorite. So are restaurants.

My student told me that his aunt in California made $20,000 per month at one restaurant, and her family owned four. He’d also been educated about taxes, too. One nail salon owner paid $50,000 in taxes a year (we talked about retirement accounts, then, and how they can help you pay less in taxes).

“But I want to be an electrician,” he told me. “My dad’s friend works two weeks then stays home two weeks. He makes $15,000 a month.” We talked about going to technical school to become an electrician, how long that would take, and how much it would probably cost. It would cost a lot less than what I expect college to cost for my kids.

My student told me when he turns sixteen, he’s going for three licenses: driver’s license, hair, and nail license. That way, he can work at the nail salon for his tech school tuition.

But here’s the big question I had after our conversation: was my student right? Are these salaries accurate? Does it make more sense to go to tech school and skip an expensive 4-year degree for a first-generation immigrant?

As we talked, I thought back to a class I audited back in 2002, at the university where I worked in Chile, taught by a Harvard-educated professor who was visiting from the US. He was teaching a business case about opening dry cleaning shops. We reviewed the financials, and saw that, because of a lack of new technology and high overhead, dry cleaners were not a good investment. They couldn’t really make a profit if they paid employees the going wage. Unless… “unless you’re a family where everyone in the family works at the shop,” he told us. “Parents, sisters, brothers, aunts, uncles. Then everyone works without pay and you share the total profit. Most shops earn around $100,000 a year, so that would be more than enough for a family to live on.” This is why dry cleaners are a popular choice with immigrant families, because with everyone pitching in and helping with the family business, the family can enjoy a six-figure income.

So, do nail salon owners really make $30,000 per month? At first, I thought it highly unlikely: The Bureau of Labor Statistics cites the average income for an owner of a nail salon as $40,580 a year. However, that’s only reported income (paid via credit card-cash earnings could potentially be unreported). There is overhead to think of, like in the real estate business, which is high, and workers are usually paid via a compensation model: that is, they receive a percentage of all the services they provide. They are rewarded for being fast and efficient. After talking with many more individuals, I realized that not only could they make $30,000 a month, many make more. The nail salon where my student’s mom works is the only one in town and is constantly packed. His uncles are currently opening a nail salon in a neighboring town, so the figures he’s discussing are probably accurate. 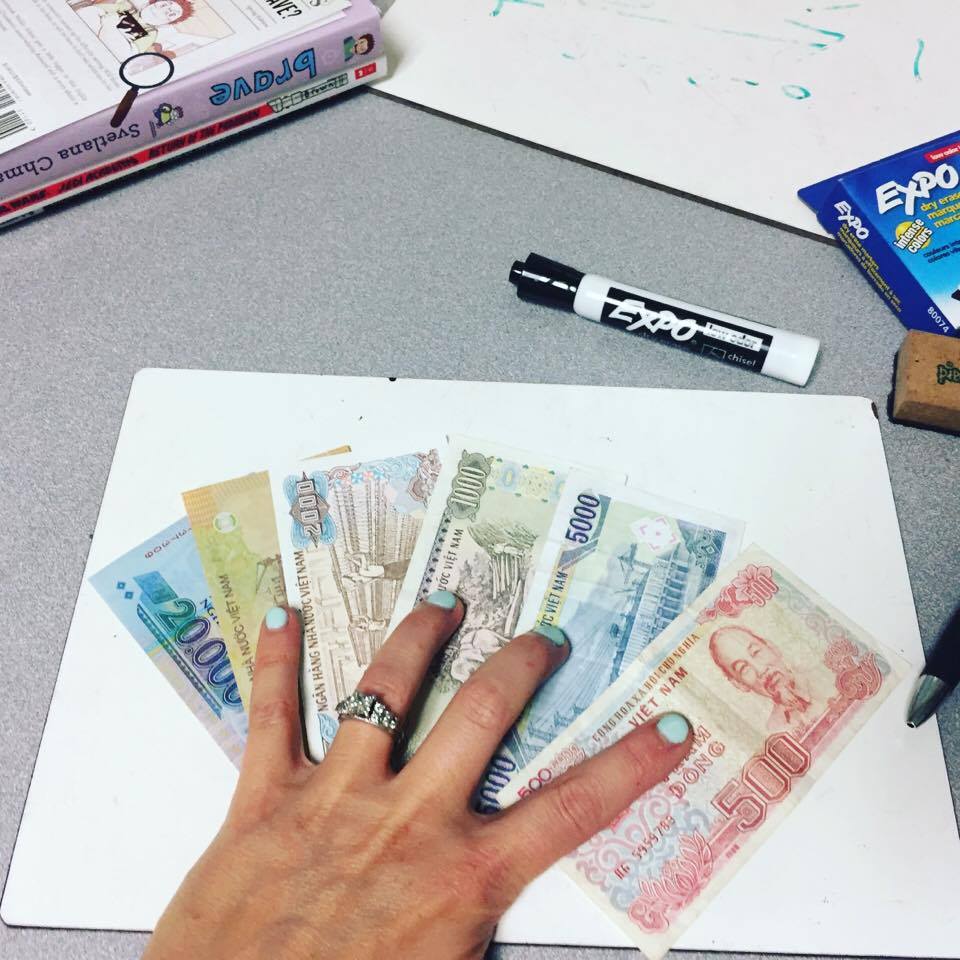 My nails, blue from a recent visit to my student’s mom (showing off Vietnamese money).

Manicurists and pedicurists report earnings of an average of $22,150 (as of 2016) per year–that’s about $425 per week on average, around the country. In the top paying region of the country, Springfield, Illinois, manicurists earn $46,850 a year. An article by the LA Times reports that manicurists in a Vietnamese-American salon there earn $100-$200 per day.  But because many workers underreport their wages in order to avoid paying taxes on them, it’s hard to get an accurate figure. It’s also hard work: my student tells me that his mom works long (11 hour or more) days, often without breaks to eat, and her time is spent bent over her clients, which is hard on her physically.

One of the reasons work in a nail salon is so appealing is low barriers to entry: you must be licensed to give manicures and pedicures, but you can do this by taking a short class. You don’t have to speak English very well (or at all, if there are other English-speakers in the shop).  For salon owners, you need starting capital–perhaps $40,000-$60,000–enough to rent and renovate your shop and buy spa chairs, polish, and mirrors.  If you’re able to keep your overhead low, you can earn more. Savvy immigrants probably find many ways to keep costs low and profits high–after all, these are people who were audacious enough to leave their home countries and move somewhere new to set up a new life. That takes a certain chutzpa. Also, in our part of the country, New England, nail salons charge more than they do in large cities like Atlanta. There is less competition (but less demand, too, especially in winter).

The Story Behind the Story

And why are so many Vietnamese immigrants nail techs, anyway? I came upon this intriguing story that explained more: Tippi Hedren, an actress famous in the 1960s for roles in movies such as Alfred Hitchcock’s The Birds, visited a Vietnamese refugee camp in California with the idea of helping women find a trade in their adopted country. They loved her manicure, and she realized that would be a wonderful profession. She brought in several manicurists to train the first group of women, and shortly after, Vietnamese refugees began opening discount nail salons all over Southern California. Today, Vietnamese-American salons charge anywhere from 30-50% less than luxury salons, according to the article. And many–most–nail technicians are sending money home to their families in Vietnam. A whopping 8% of GDP in Vietnam is due to money sent home from Vietnamese living and working abroad.

So does it make more sense for my student to work in a nail salon or go to college? While becoming a nail tech could probably provide a comfortable living, it’s hard, physical work and he could probably make more with less effort elsewhere. But college, even a community college, is probably not a good idea, in my opinion, because of several reasons: 1. the prohibitive cost, and 2. the delayed nature of earning money. My student will undoubtedly be expected to start working and help his family earn money soon after he graduates.

Before I gave up my advice on higher education for my student, I wanted to investigate his idea about becoming an electrician. The Bureau of Labor Statistics says electricians earn $52,720 per year. However, in Boston, electricians earn an average of $71,120. In a rural area like ours, where service professionals are in high demand, it’s possible (in fact, probable) that they could earn more.

Normally, electricians receive training, through a technical program or apprenticeship, and then become licensed (and in some states, certified) to work. Apprenticeships generally last 4-5 years. Apprentices need to be 18.

After learning more about both nail salons and electricians, I think becoming an electrician is an excellent career option for my student. “Blue-collar” trades like this and plumbing, welding, and bricklaying are professions that pay very high wages, and allow students to go through an apprenticeship or complete a two-year technical program for far less money (around $9,000 per year). Trent from The Simple Dollar wrote a great article about the benefits of trade school, especially for those who aren’t great students (or who, like my student, don’t speak fluent English yet). My student won’t need to study for four years, will probably be able to pay his way through the program, and can expect a higher-than-average salary during his working life.

Of course, if my student could become an entrepreneur like his uncles or aunt in California, then he’s essentially in charge of writing his own check. So the real lesson to me was, how can I encourage my other students to feel confident enough to take risks and start their own businesses?

Once again, my students help me shift my focus and see the world through a different set of lenses–in this case, not rose-colored, expensive, ivy-league-bound lenses, but practical, real-world specs where earning a living now and making more money later have to intersect.

What do you think about college and careers? Do you see the value in a pricey four-year school? Would you consider the tech school route for your kids or family members? Or do you think entrepreneurship is the way to go?

27 thoughts on “Does It Make More Sense to Go to College or Open a Nail Salon?”