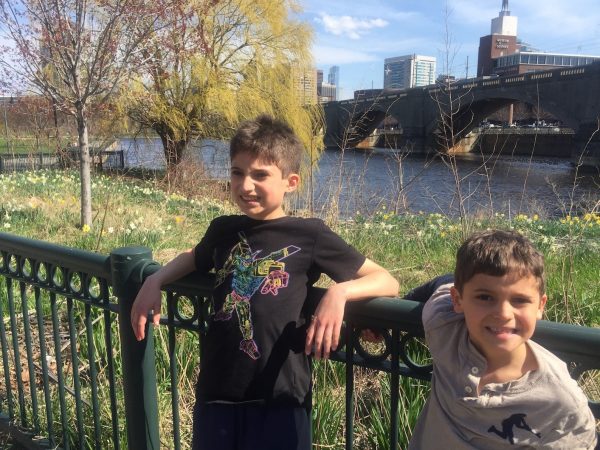 This week, I was inspired by a Smart Money Mamas Instagram post to talk about a subject that’s been on my mind lately–our kids’ money emotions.

Mr. ThreeYear is traveling in Brazil this week, and last night he called me to tell me that he saw a little boy on a street in São Paulo, selling candy. The little boy apparently looked just like Little ThreeYear, down to the skinny legs.

We talked about how grateful we are for not only the fact that our kids don’t need to work to help us earn money, but also that they don’t have any money worries.

While I grew up in an affluent home and can relate to that feeling, Mr. ThreeYear did not. Money was a constant source of anxiety, tension, and strain for him. There was never enough.

Through saving, investing, and earning more in his job, Mr. ThreeYear has completely changed his own children’s money emotions.

Our boys feel fairly empowered when it comes to money, and if they need extra money, they think of ways to get it (unfortunately, lately that has become thinking up ways to convince Grandma and Grandpa to give it to them). We feel pretty positive that they now equate “getting money” with “work” of some kind or another (even if it’s the “work” of manipulating their grandparents).

Obviously, before you can change your kids’ feelings about money, you have to change your own.

For us, that started when we got serious about tackling our debt. It took us several years of firmly taking our money management in hand until we started to feel like we were in control of our spending habits. While we still, 10 years later, struggle with spending a bit (especially me), years of self-control in the budgeting front mean that we have a fully-funded emergency fund. We have a healthy net worth.

If we have a financial emergency now, we no longer feel panic. We have it covered. That took years of work, but we’re finally there.

That doesn’t mean you can’t change your kids’ money emotions until you are masters of money, because there will never be a point where you can stop and say, “we’re now perfect with money.”

But it does mean that you need to put your own oxygen mask on when it comes to finances before securing that of your kids. So if you’re currently drowning in debt and still overspending, you need to work on digging yourself out first.

Financial Security Is Not Just for You

One of the things we’ve realized, as we’ve built more financial security in our lives, is that is hasn’t just benefitted our lives.

It’s benefitted our kids, too.

As painful as it’s been in the moment to say “no” to certain financial requests of our children, especially eating out or buying drinks at a gas station on the way home from practice, it’s been extremely satisfying to watch them blossom under a financially secure roof.

Both our boys know that we are financially secure as a family. We’ve fielded questions from Little ThreeYear, ever anxious, about what would happen if Dad lost his job. We can see the relief on his face when we say, “we have money saved if that ever happens, so we’d be okay.” Junior ThreeYear understands that we are growing our net worth to send him to college and for our retirement.

While it may not always be possible to give your kids 100% financial security, give them as much as you can. It is very hard to get out of debt and build an emergency fund. It takes time to learn to budget and control your spending. But even if it takes years or learning, failing, getting better, and trying again, it is worth it.

And your kids will learn from watching you work so hard to create financial security.

Kids Sense More Than We Think

While we might think our children are ignorant about the state of our finances, they pick up more than we think.

Unfortunately, they’re usually not discerning enough to understand all the particulars of financials. So it’s important to keep them informed of the basics.

For example, my sister and I both remember our mom making comments about not being able to afford certain things. We both thought that we were poor at different moments in our lives. We had no concept of money and didn’t understand that our parents, in fact, had plenty of money and we were well-off. We just sensed our mom’s financial anxiety.

In other words, kids sense our emotions around money, much more than we think they do, but they’re liable to understand much less than we think, too.

So if we are feeling nervous about money for a particular reason, we need to explain what’s going on to them, while also reassuring them that everything will be okay, as much as possible.

So what are some steps you can take if you’d like to make sure your kids have positive emotions around money, so that money topics don’t unconsciously inspire panic or fear?

Consider banning the phrase “We can’t afford that.”

When parents say “we can’t afford that,” they’re teaching kids that money is limited and they’re going to run out. Kids don’t understand budgets, prioritizing, and saving for the future, so their first thought when they hear “we can’t afford that” is “we’re poor” (as my sister and I did so many years ago). And that starts their little selves worrying that you won’t have enough money for your house or for food.

Even if you truly can’t afford the item in question (a Lamborghini or a 40-foot yacht, for example), try using another phrase that will actually help your kids associate positive emotional feelings with money:

“We choose not to buy that right now because we have other things we want to do with our money.”

This brilliant phrase helps kids understand that spending involves trade-offs, and self-discipline is often required. With this phrase, you’re teaching your little ones that when you choose not to buy them a toy in Target, it’s because you want to save that money to spend in other, more important areas, like their college savings (or your retirement, or your manicure fund–whatever!).

Kids are master negotiators, right? I remember my boys as toddlers, screaming in the middle of the store because I wouldn’t let them go see the toys, or arguing endlessly to keep watching the iPad in a restaurant. Fond memories.

Whenever my kids begged for toys, candy, or something else I wasn’t willing to buy, I instituted what came to be known as the “family rules.”

“In this family,” I would say, “we don’t buy toys except for Christmas or birthdays.”

Human beings are tribal animals, and all of us want to belong to a tribe. When you institute family rules, you’re teaching your kids how your family (tribe) works. It’s a powerful way to encourage your little ones to adopt their family’s cultural norms (pro tip: this works a lot better with toddlers than it does with teenagers. But it even works with teenagers, too!).

I would follow up by encouraging my kids to put whatever they wanted on their birthday or Christmas “list.” There was no list, and the boys forgot about the toys they wanted as soon as we left the store, every. single. time.

Hearing me say that I would put it on their list helped them make peace with the fact that they weren’t going home with that item, but that their mom had heard and paid attention to their wants nonetheless.

Depending on their ages, kids will have limited understanding of your income and expenses, but that doesn’t mean you can’t explain how things work in basic terms.

This summer, my eight-year-old asked me how much we made. I pulled out our Monopoly set and grabbed several thousand dollar bills. I showed him how much we made each month, which seemed like a lot when we first started out.

But then I showed him how much we paid in taxes, and what that left to spend.

I showed him our savings, for college, for retirement, for home improvement.

I showed him how much we paid for our house, for our utilities, for our food, for clothing and gas.

Then, using the little bit that was left, I showed him what was leftover to buy fun things.

After our conversation, he made the comment, “wow, that’s not very much, is it?” And it made it a little easier for him to understand why we had to make money tradeoffs and couldn’t just buy endless Lego sets for him.

We talk to our older son in more detail, explaining roughly where our net worth is and how much it needs to grow by retirement. We explain how we save each month and show him the growth.

The key for these conversations is to keep them brief and with only as much detail as your kids can handle.

They’ll quickly tire of money talk and leave, so you won’t be able to cover the basics in a day, or even a week. It will take many months of short conversations.

Our rule is, if our kids have a money question, we answer it as best we can.

While I wasn’t comfortable answering how much we made with Little ThreeYear, I was okay showing him in Monopoly money.

The Stuff that Truly Matters

Ironically, it’s getting control of your financial situation that gives you the freedom to focus less on money, and more on the stuff that matters the most.

Once you’re able to worry less about money, then your kids will feel that change and have a better relationship with money, too.

And that’s a legacy we’re so proud to have changed.