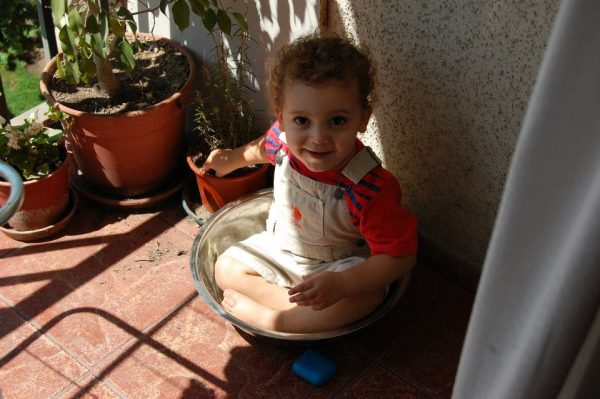 When our family started to get out of debt, we followed Dave Ramsey’s Baby Steps. Step 1 was to put aside $1000, as quickly as possible, for any big bills that might come your way.

Because Mr. ThreeYear had recently been laid off, and had received a three-month severance, we still had a little extra money in our bank account for just this purpose.

However, after we paid off our $38,000 of consumer debt, our next step was saving a larger emergency fund, one that could cover 3-6 months of our basic expenses were either of us unable to work.

It took us awhile (years, I’m afraid to say), and our methods were a bit unorthodox, but in the end, we had saved enough to pay our basic expenses for four months (we decided we needed an emergency fund that was on the smaller side, since Mr. ThreeYear works in a company with a no-layoff policy and the rest of our financial situation is quite stable).

Here’s how we did it.

Way back in 2009, just after we’d paid off our debt, we began Baby Step 3, saving for a fully funded emergency account.

Just a few months after we started, though, Mr. ThreeYear got a job with his current company in New Hampshire.

That meant we had to sell our Atlanta house (at a huge loss) and move into a rental house in New Hampshire.

We decided to put our emergency fund on hold, as we needed to save up a down payment for a new house in New Hampshire.

When we sold our Atlanta house, we lost all equity (and the downpayment we’d put into it) and actually sold our house at a loss. It was 2010 and we sold in the worst housing market in Atlanta in 100 years (to see how we sold our house in less than two weeks, despite such a terrible market, read this post).

So when we landed in New Hampshire, we were essentially starting over with saving for a downpayment for our next house.

All of our extra money went into our savings account. While it was essentially the same thing as an emergency fund, we knew that money was earmarked for our house.

We bought a house two years later, in March of 2012, and almost all of the cash we’d accumulated went into our down payment. Because we hadn’t been able to save up the full 20% downpayment, and only put down 10%, we ended up taking out a second mortgage on our house for the remaining 10%.

For the first two years that we lived in our house, we only had a small amount in savings, varying between $2000-$5000.

At this point, we’d stopped following Dave Ramsey’s baby steps and had begun to invest and save for retirement. We decided it was more important to catch up on retirement savings than it was to have a fully funded emergency fund (and the math agreed with us).

Our extra money went into catching up on investing for retirement, paying down our 2nd mortgage, and doing everything we could to make some progress on our net worth goals.

We were fortunate to be in a stable job situation, so we didn’t worry too much about not having a huge emergency fund. I’m sure that if our job situation had been more precarious, we’d have different feelings about it.

By the end of 2014, though, we made the decision that it was time to fully fund our emergency savings.

Because we had so many different money goals (maxing out Mr. ThreeYear’s 401k, saving for the kids’ college, paying off our second mortgage), we decided we would use a portion of Mr. ThreeYear’s end-of-the-year bonus to slowly fund our emergency fund.

We decided to add several thousand dollars to our emergency fund each year until we had it at the level we wanted it.

By 2017, we had almost reached the amount we needed for our emergency fund.

Then we had to replace our roof.

Because it was going to cost over $14,000 to complete, we had to take money from our emergency fund to pay for it.

Since we had the simultaneous goal to pay off our cars and our apartment in Chile by the end of that year, we once again left our emergency fund partly funded.

It wasn’t until 2018, just last year, that we could dedicate a substantial portion of our monthly income to the emergency fund. By March, we’d almost got it re-funded completely.

Then, we decided to move to North Carolina and had to fix up our house to move. We took a break from funding the emergency fund and dedicated those dollars to house repairs.

Finally, in July, when we sold the house, we were able to completely re-fund our emergency account with part of our home equity.

We also used one month of mortgage that we didn’t have to pay plus a little more home equity to get a month ahead in our budgeting.

The Moral of the Story

While we love to invest, having cash around is hard and tempting. I think that’s why it’s taken us so long to get our emergency fund up to the place we want it to be (and we could still stand to add money to it).

We finished paying off our debt almost ten years ago, yet we’ve just recently gotten a fully funded emergency fund. But we’ve been able to manage emergencies just fine.

Here’s the thing: when our emergency fund is fully funded, it brings a security to our lives that we didn’t have when we only had a few thousand dollars in the bank.

We know that if something catastrophic happens, we’re covered for awhile. That cash really does buy peace of mind.

But it hasn’t been a priority to fully fund it.

If we had to go back and do it over again, I’m not sure if we would have done anything differently (well, we wouldn’t have gotten into debt in the first place, so I guess we would have).

I don’t, however, see ever having a huge chunk of cash lying around. It’s too tempting to spend it (even if it’s on “responsible” things like buying more stock, buying a rental house, or saving for college).

You could bank your raise straight to your emergency fund.

But having an emergency fund really does allow you to relax a little more, to sleep easier, knowing you’re covered if something goes wrong.

In addition to our emergency fund, we also live on last month’s income, so we usually have an extra month’s income in the bank as a buffer.

It’ll Be Imperfect; Do It Anyway

It took us years, and we took two steps forward, one step back, many, many times before we got our emergency fund fully funded.

We didn’t give up, and kept working at getting it to the level we wanted. It was there for us when we needed it (although the roof wasn’t an “emergency” per se, it was to us and we were glad we had savings to cover a major home repair project).

No matter how imperfectly your saving is, or how long it takes, you’ll eventually reach your goal, and you’ll get to reap the benefits.

Do you have an emergency fund? Why or why not? Are you in the process of growing it now? How do you fund it?

4 thoughts on “How We Grew Our Emergency Fund”