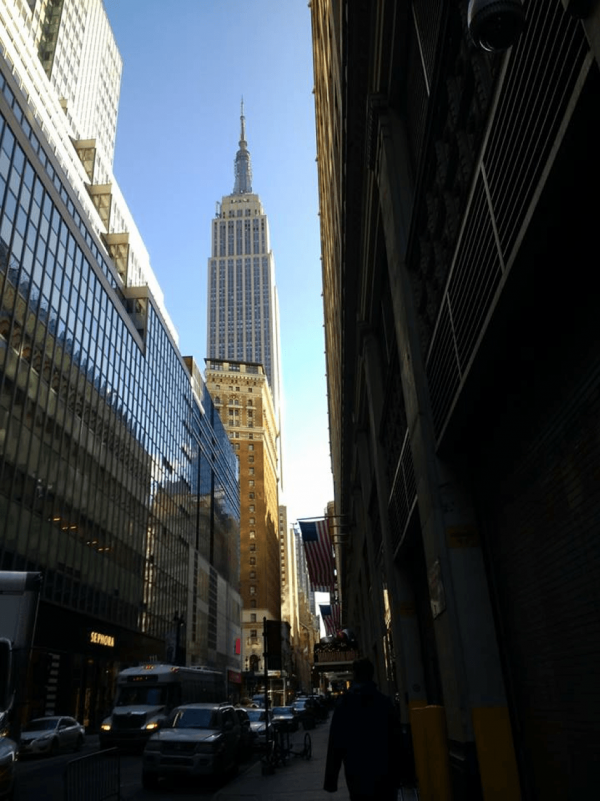 Most of us, when we hear we’re getting a 3, 4, or 5% raise, go out to dinner to celebrate and then, without even realizing it, slightly adjust our spending to the “new” income level.

One of the most powerful tools you have, though, especially if you find it hard to save, is your yearly raise. For the last six years, Mr. ThreeYear and I have used every cent of his annual raise to increase our savings and investing.

Why? Because we live a very good life at our current level of spending, and we don’t need to spend more. If we want to go out and celebrate, take a trip, or spend the money some other way, it will be waiting for us in the savings account. If we didn’t squirrel the money away where we didn’t see it, we’d spend it without even realizing it, and then all the effort behind earning that raise would be for nothing.

We’ve frittered away money over the years in exactly this way, and it always made me feel powerless over our spending. “But where did that raise go? How do we spend more now? Where is that money?” Now, as I watch our savings grow, I realize that we’re the ones in control of the money, and we’re holding on to it until we’re ready to use it in a thoughtful way (or invest it, which is my favorite thing to do with our money besides travel!). 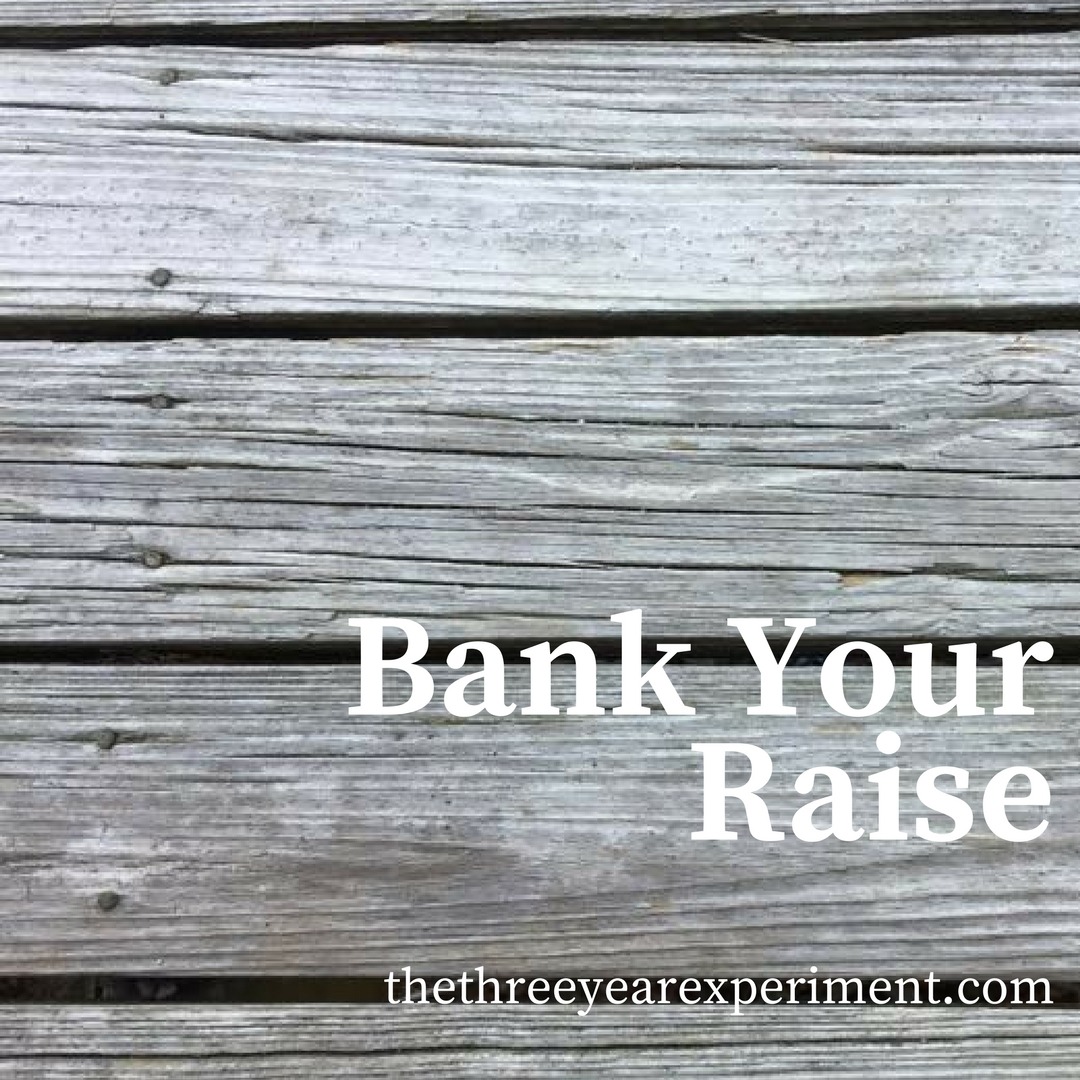 Because 90% of personal finance is emotional, using your raise to finance your spending goals is beautiful, because you don’t feel like you’re sacrificing anything. If you immediately start using it to pay down debt, increase your 401K contributions, or save more, and never allow yourself to get used to a slightly larger balance in your checking account every two week, then you’ve “tricked” yourself into using your money wisely.

I am naturally a spender, so this method has been a very helpful one psychologically. In fact, studies have shown that using the raise method to increase your 401K contributions, also known as auto-escalation, is responsible for a record-breaking 27% of workers increasing their contributions in 2017.

When we moved to New Hampshire, we sold our house at a loss. That left us with zero dollars for a down payment for our next house. We moved into a rental and lived there for two years while we saved every spare dollar we could towards a down payment. We decided to temporarily decrease our 401K contributions during this time to the match level (6%). While I would probably make a different decision now, that was the decision we made with the information we had then.

When we bought our current house, our first order of business was to max out Mr. ThreeYear’s 401K as quickly as possible. But, we had needed every spare dollar to put 20% down and take out a 15-year mortgage. So we increased 401K contributions as much as we could and then, two months later, when Mr. ThreeYear received his annual raise, we increased our contributions by the same percentage as his raise. We did this for three years in a row until he was contributing $18,000 per year (now $18,500).

The beautiful thing about this plan is that you’re getting a triple whammy: you’re increasing your investing, lowering your tax bill, and maintaining your current spending level in one fell swoop.

After we maxed out Mr. ThreeYear’s 401K, we began using his annual raise to increase our savings rate. We usually wait until his first paycheck with the raise in it clears, and then we know the exact dollar amount to transfer to savings. I set up an automatic draft with our savings account (we use Capital One) and I increase the automatic draft by the exact dollar amount in his raise. That way, we never get used to the extra money, and it’s sent to our savings account automatically.

For several years, we struggled with banking our raises. After I stopped working and became a stay-at-home mom when our first son was born, we lost almost 40% of our income plus our paid-for health insurance (my company paid 100% of our premiums). It took years for us to adjust our spending downwards and Mr. ThreeYear to increase his earnings upwards before we felt like we weren’t constantly running out of money. For several of those years, each raise was money we added to our monthly budget.

But, slowly, we paid down our debt and eliminated one, then another, of our monthly debt payments. It is amazing to me how much more money we had each month once we eliminated our debt payments. Even when we save that money, knowing it’s there if we need it somehow takes the pressure off when we have higher spending months.

Pay Off Your Debt

If you do have debt, paying it off with your raise can be a powerful way to get rid of those pesky payments in your life.

We debated paying off our apartment in Chile for years. The monthly payment wasn’t too high, we thought, and it probably makes more sense to invest the money. However, when we finally decided to pay it off at the end of last year, we were amazed at the feeling of freedom it gave us.

Not having that monthly payment to worry about lightened a mental load in our minds. Now, we take the money we had been sending to our bank in Santiago and we’re adding it to our emergency fund.

Using your raise to get rid of your recurring monthly payments, even if it’s just $50, $100, or $150 per month, will allow you to pay your debt off potentially years earlier. And because it’s extra money, you can set up an automatic draft and you’ll never even notice where that money has gone, until you look at your decreased loan balance.

If you’re at a point in your life where you were really counting on using your raise to increase your standard of living, and aren’t ready to bank the whole thing, I recommend saving part of it. Maybe you got a 3% raise and you’re willing to use 1% to increase your 401K or pay off debt. Great! That’s 1% more than you were saving before. The years will pass faster than you can imagine, so even saving just 1% a year for 5 years means you’ve increased your 401K contribution a whopping 5%! Plus, the value of that 1% raise increases each year, as you earn more money. Paula Pant wrote a great post over at Afford Anything about the power of saving just 1% more per year.

Savings is behavioral, as I well know. I constantly have to trick myself to save money. But developing the habit of banking your raise has been one of the most powerful tools we’ve used to increase our savings rate.

What’s a trick you’ve used to save more money?

5 thoughts on “Bank Your Raise”