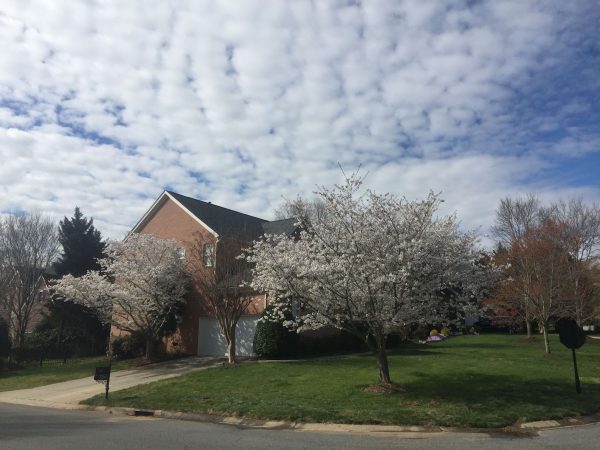 As we enter the fourth month of the year here in North Carolina, I’ve been thinking about the differences between our old Spring in New Hampshire and the Spring we’re experiencing now.

While it did snow yesterday (very strange for North Carolina in April), in general we’ve enjoyed warmer temperatures and sunshine. New Hampshire still has snow on the ground, so the flowers and Spring weather are a welcome change.

Spring has always been my favorite time of year here, and this year is no different. The new blooms and warmth make me smile. And things are in full bloom right now. Our cherry trees have exploded in tiny white blossoms that look like snow as they fall off the trees. We’re sneezing like crazy with all the pollen in the air, and everywhere you turn, creeping phlox, tulips, daffodils, and other early Spring emergents are bursting out of the ground in an explosion of color.

March was a pretty boring month, net worth wise. Nothing much changed and we saved a normal amount towards retirement, our HSA, home equity, and the like. Our total net worth increased just over 1%.

Our net worth now stands at 55.6% of where we started. Our gains came primarily from the stock market and home equity. Sorry for such a boring update–I’m hoping next month is more exciting, when Mr. ThreeYear’s stock gift is announced.

Our spending reports don’t show how much we save, only what we spend. But the less we spend, the more we have to save, and that has never been more apparent to us than after getting a month ahead in our budgeting.

We use YNAB to track our spending, and we budget a month ahead, meaning we use money from the previous month (February) to pay for our expenses in March.

After our No Spend February, March expenses picked up quite a lot. We had one big expense, tickets for my sisters-in-law to come visit us for two weeks in July. Unfortunately, the only time they could get vacation was during the middle of the most expensive travel time from Chile to the US, and one ticket would have used up all of our points. Mr. ThreeYear’s oldest sister has never been to the US, and his other sister last came for our US wedding, fourteen years ago. So we basically said, come whenever you can!

Charity: $87. Compassion International plus contributions to the local church we’ve been attending.

Groceries: $565.77 This is one of our lowest totals ever. I worked really hard at keeping our spending low, and was helped by our two trips to SC to visit my parents during March, where we ate all of their food and not ours. 🙂

Eating Out: $277.83. A full $185.34 of this total went to taking our neighbors out to eat at a really nice restaurant early in the month. Next time, they’ll pay. The only other substantial restaurant expense was brunch out as a family when my mom came to visit.

Entertainment: $67.19. I had a baby shower for my sister and the boys and Mr. ThreeYear went to see a movie. We also rented a couple of movies on iTunes.

Fun Money: $176.17. Mr. ThreeYear bought another desk for his office (it was a wooden desktop from Ikea and he got the legs online). He also bought a bunch of Tylenol to take with him on his trip to Chile (he combined it with a work trip and is visiting them for a week). I bought a parenting book, Google storage, and entrance to a museum for a field trip I chaperoned with Little ThreeYear.

Gifts: $278.63. Most of this is for the shower I hosted for my sister, who’s having a baby next week! She and I took my mom out to lunch for her birthday as well.

Tickets: $3464.26: The cost of the two tickets from Santiago to Charlotte in July for my sisters-in-law. We used money we saved up last year from our grocery challenge for one ticket, and dipped into savings to buy the other. Maybe if you’re planning a trip to/from Chile, don’t plan it in July? Pro tip.

Fitness: $620. Our club messed up and overcharged for our fitness membership, so we’ll get a credit next month. This also includes $43 of group tennis lessons. Since we’ve moved to North Carolina, we’ve decided to prioritize fitness.

Clothing: $94.64. I signed up for the women’s tennis league this Spring, but I didn’t realize we had to buy a “uniform” (overpriced tennis clothing) and lunches after all of the home matches. I think in the future I’ll do a less-expensive type of tennis, like the Compass matches Mr. ThreeYear plays, which are maybe $50 per season.

Haircare: $72. Two haircuts for Mr. ThreeYear and one each for the boys. I still haven’t had my hair cut or colored since May of last year. Can I make it an entire year?

Home Maintenance: $704.84. Okay, here we go. This month, Mr. ThreeYear and I embarked on an epic, DIY lawn adventure. Unfortunately, because I didn’t take pictures, I can’t show you the epic-ness of all the work we did. But we took out a HUGE row of bushes that blocked the road at the perimeter of our yard by HAND DIGGING them. I cannot tell you how hard it was! Then we opted for sod to cover the 500 square feet of red clay we then had to cover. Read all about my sod buying snafu here. This giant home maintenance total includes sod, renting a tiller, buying a digital RainBird (irrigation) interface to water the grass, and a new plant and runner, which I admittedly bought for the baby shower to make the house look nice.

Household Goods: $141.38. Legs for Mr. ThreeYear’s office desk (I don’t know why I categorized half here and half in his spending), Chilean liquor, an alarm clock for Junior ThreeYear, and razors.

Babysitter: $74.84. We paid for the babysitter for four kids when we went out to eat with our neighbors. Yes, I have to find a cheaper babysitter.

Lessons & Activities: $254.64: Half-hour tennis lessons for Little ThreeYear for the month of March, school lunch fee, the other kid’s book fair, and two games for the Nintendo at $75.63 (which they paid me back for with money they’d gotten as gifts).A

Pet: $105.40: Lucy got spayed this month! We did the surgery at the affordable “Stand for Animals” clinic and I already paid for it (as part of her “New Puppy Package” where I got all vaccinations and the spay for $150), but I did have several add-ons the day of the surgery: $5 for nail clipping, $25 for a microchip, $10 for a cone, and $15 for extra anesthesia because she’s so huge. Also one bag of dog food.

Gas: $211.45 Whew! It’s higher when we actually drive. Mr. ThreeYear drove to the airport and back twice, and we drove to South Carolina (three and a half hours away) twice.

Registration: $155.46. Apparently owed this on the new car, and it became due this month.

Water & Sewer: $51.11. Because of our new grass, we have had to water like crazy, so I am scared for our bill in April. Will keep you posted…

While our mortgage isn’t included in the total, even adding it in, our total spending without the plane tickets is pretty low (for us). Our new reality is that our fitness costs are high and fixed ($363 per month in dues), but that spending category is optional and we can cancel it anytime. For now, we’re getting value out of it and will continue to be members of our club. Otherwise, though, we’re continuing to learn how to keep utility costs low (with the exception of watering our grass!), as well as gasoline, food, and entertainment. Who says you can’t teach an old dog new tricks?

As I mentioned earlier, it snowed yesterday (very lightly), so I’m hoping that’s winter’s last hurrah before heading out of town. We’re expecting 70-plus degrees for the rest of the week, and since we’re heading to the beach for Spring Break in a week and a half, I’m hoping for much warmer weather very soon!

Have a great month!

8 thoughts on “March Net Worth Update”