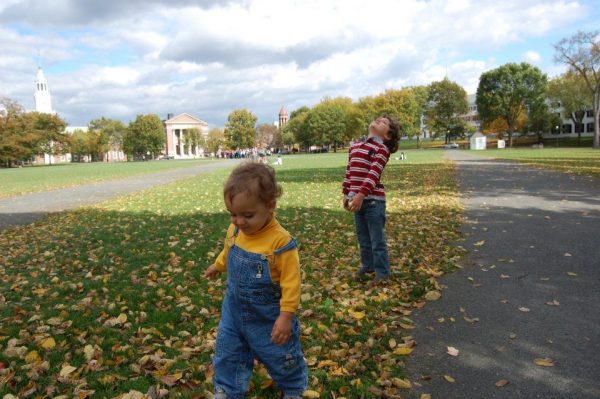 One of the bedrocks of savings, if you have kids, is that pesky college tuition that looms large over the entire breadth of their first eighteen years.

It’s hard to get a handle on how much, exactly, you need to save, since college tuition costs seem to rise like Zimbabwe currency back in 2008.

When I went to college, my first year cost an exorbitant $19,000. I could only attend because I received a 75% academic scholarship (yep that was a humble brag thrown in there). That was in 1997. That same college now costs $46,012 just over twenty years later.

When the sixth graders at my former school did a class project detailing the costs of college, I was floored. $67,000 a year for Duke? $35,000 for State U in Timbuktu?

Needless to say, I have not been feeling super great about the amount we’re saving for the boys’ college, especially since I’ve been hearing from a lot of people how hard it is to get into UNC Chapel Hill, which is currently my choice for my kids, as it’s the cheapest state school in the entire US of A, at $24,266 for tuition and room and board for in-state students.

But how much should we be saving? Won’t they, too, get scholarships for some of the cost? (Jury’s still out on that one). We’ve been aiming to save a certain amount each month in their college funds and each year in our taxable accounts, but our move definitely disrupted that a bit.

So how much should we reasonably save? Luckily, I stumbled on a very palatable formula in the New York Times, which I’ll share with you. But then we need to talk about… if it’s actually a financially sound plan.

It’s fairly easy to sum up the plan in just a few words. It comes from financial advisor Kevin McKinley:

“Save a quarter of the cost over a child’s first 18 years. Pay another quarter out of current income over the next four years. Borrow the rest, split among the family.”

So, let’s say Junior ThreeYear gets into good ole’ UNC Chapel Hill. We’re talking about $100,000 over four years of college.

If we saved a quarter of that, we’d have $25,000 saved by the time he was eighteen. To save that much, we’d need to have been saving roughly $115 per month from the time he was born (we have).

Then, when he started college, we’d need to come up with another $25,000 over the four years he attends school. That equals around $520 per month that we’d need to pay out each month while he was in college. According to McKinley, any earnings that Junior ThreeYear receives during college can be added to this total, so if he was able to earn $6,000 per year working part time, that would lower our total contribution.

Finally, McKinley recommends borrowing the other half, stating “You’d like to pay cash for your house, too, but it’s just not realistic.” He recommends taking out student loans for $25,000 and taking out a home equity loan for the remaining $25,000.

Is it Financially Sound?

For many people reading this blog, taking on debt is akin to cutting a hole in their arm. It’s not palatable, and they’re not going to do it.

For our family, personally, we don’t plan to take on any debt when the kids go to college, but that means we’re limiting their choice of schools. However, we limit their choice of a lot of things in the name of financial sustainability and reason, so I’m not too bothered by this and neither are they (yet, anyway).

We’ve currently saved about 35% of college costs for Kid 1 and 25% for Kid 2. We will need to save about $10K over the next six years to have 100% of college costs for Junior ThreeYear by the time he starts college. And we’ll need to save just a bit less for Little ThreeYear over the next nine. We’ll probably be very close to 100%, at least for the amount of school we’re willing to cover, which is four years’ tuition and room & board for a NC state school.

However, we do plan to cash flow some of the cost of college, if we need to, during college. When we lived in New Hampshire, we would have paid off our house during Junior ThreeYear’s freshman year of college, thanks to our fifteen year mortgage, so our plan was to apply that money to college education if we needed to. Now that our house won’t be paid off until after Little ThreeYear finishes college, we’ll simply pay out of pocket and save less during those years (again, if we need to).

When Does Taking on Debt Make Sense?

But if you don’t have enough saved, and know you won’t be able to save enough in the ensuing years, does it make sense to take on debt? If you’re in a situation where saving $100,000 per child (much less $250,000 per child!) seems about as likely as chocolate croissants falling out of the sky, then saving up $25,000 per child over eighteen years, and subsequently taking out a loan in their name and your name for $25,000 more, each, isn’t a terrible plan, in my opinion. While in an ideal world, no one takes out student loans for college, some people need to.

I’m not advocating sending your child to the most expensive college available, certainly. I know many wildly successful students who went to state schools, or even community colleges, and I know plenty of losers who went to great schools. Resist the idea that your child’s college defines your success as a parent. Because I think that’s where parents are getting into trouble these days.

McKinley’s plans give you clear limits on how much you need to save and the limits you need to place around your debt. But if you don’t want to go into debt, his plan’s not for you.

Therefore, I propose an alternate plan:

Work to save up 75% of the cost of attendance at a state school before your child is 18, and aim to cash flow the remaining 25% during his or her four years at college.

This plan comes with several caveats, of course:

And there’s always the choice of not sending your child to college, particularly if they’re ill-prepared or ill-suited to do well there. Many of my immigrant students will follow the trade route and be much better off (and richer) for it. Read this if you don’t believe me.

Sometimes, chunking things down makes something scary and complex more manageable, and that’s the reason I think McKinley’s plan resonates. There’s a lot of fear-mongering about saving enough for college, and the massive student loans kids graduate with, but the process doesn’t have to incite dread every time you think about it, if you figure out a plan and then follow the plan.

So, what do you think of this plan? How are you saving for college (if you have kids) and how are you doing with it?

4 thoughts on “Finally, A Plan to Save for Your Kids’ College. But Is It a Good One?”