If you’re just joining, our family of four is on a three-year journey to double our net worth and become location independent so we can move abroad. Each month, I’ll keep you apprised of our progress. This year, we’ve got some major goals, including paying off our outstanding debt (car and apartment in Chile), replacing our roof, AND saving around $70,000. As of April, we were roughly 16.5% of the way to doubling our net worth.

It’s now mid-summer (sigh! can summer go a bit more slowly, please?). The junior ThreeYears and I are currently on a month-long road trip in the Southeastern US, visiting family, and Mr. ThreeYear just flew back to New Hampshire, having joined us at the beach for a lovely, sun-burned week. 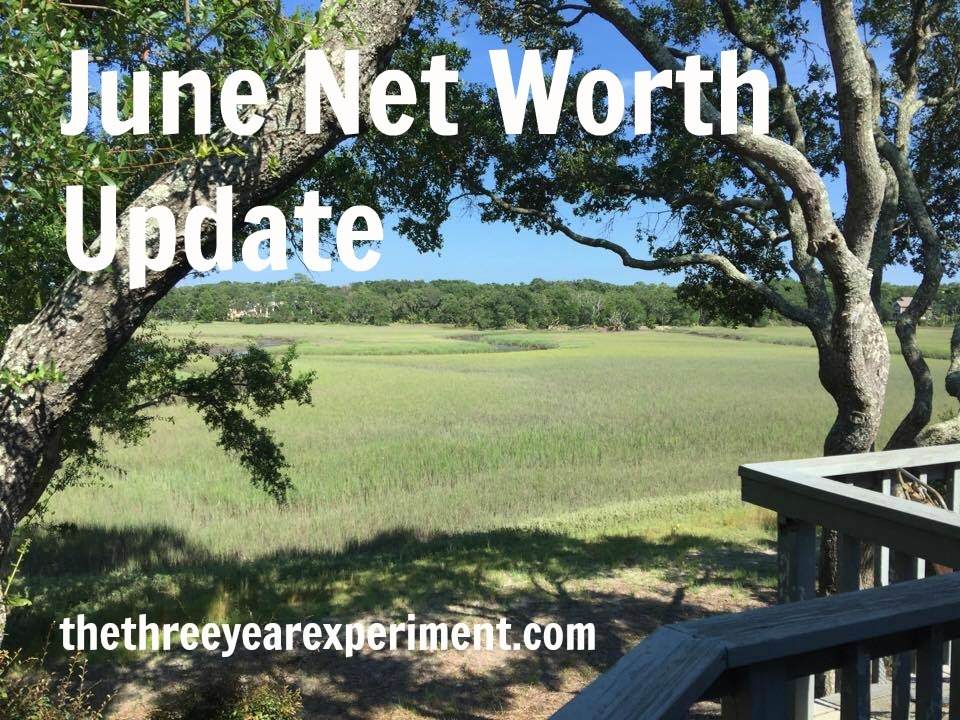 Part of Mr. ThreeYear’s plans upon return will be overseeing the replacement of our roof. Unfortunately, our thirteen-year-old roof had defective shingles, and so must be replaced. For most of April and May, we priced out having new roofs put on, having previously exhausted our options of using the warranty (it was invalid since we were the second owners of the home) and seeing what the builders of our home would do (nothing). All over our little town, homeowner after homeowner is having to replace his or her roof earlier than expected because of this particular brand of defective shingles. Our freeze/thaw climate is very hard on shingles, and this brand did not pass muster.

That “little” purchase, which we’ve been saving for all year, and will cost, all told, $14,000, was big enough that our net worth was negatively affected. While we didn’t count the money we’d saved toward the roof in our net worth calculations, we did have to take some money out of savings, which meant our number dipped down, very slightly, from the month before.

Since it’s summer, I’m not bringing in a paycheck. That has meant, in past years, that our net worth has not grown as much during the summer months, since most of my paycheck is dedicated to our investments. This year is no exception. But to be honest, the lovely expanse of ten weeks with no work responsibilities more than makes up for no paycheck!

As of June 30, our net worth had increased by a total of 18.2% from our starting point in December of 2016. In order to hit our goal of doubling our net worth in three years, we’ll need to increase our net worth by an average of 2.77% each month (or increase it by 33.33% by December), but we know that progress won’t be completely linear. May and June represent relatively small net worth jumps because of the costs in replacing our roof, no paychecks for me, and other expenses that have contributed to us being able to save less, like having to pay half of our (fairly significant) property taxes.

We hope to supercharge our savings rate next year, when the mortgage on our apartment in Chile is paid off, which we plan to do by the end of this year. That will allow us to start a taxable retirement account and hopefully funnel lots of money there.

And, because I love thermometer charts, our progress shown another way:

June was a crazy spending month for us. We had to pay half of the cost of the roof and our property taxes. The boys’ birthdays as well as the end of school made for a messy, disorganized month. We’ll pay the remainder of the roof cost in July, and then I’m hopeful that August will be a month with very low expenses. Luckily our overall yearly averages have been trending downward.

Part of the reason I’ve been publishing our spending is because putting these numbers on the internet make me very aware of our spending. Two categories in particular, this month, Eating Out and Gifts, were ridiculously large. While I love to give gifts, I think I could have planned ahead a little better, for teacher gifts, for example, and given nice plants or home-baked goods, rather than gift cards, to save in this area. Our eating out costs were so high because it was the end of the school year and I was running from place to place. We picked up dinner many times during those hectic last few weeks. Being aware that I’m likely to be disorganized with my spending and planning is one of the only ways I know to get better at it.

And now, to July!

July has already proven to be a stellar month, since we are enjoying hot beach weather, riding bikes, and good conversations with family. We’ll spend the next two weeks in North and South Carolina, then will head back up the East Coast to New Hampshire during the last week of July, to make sure our littlest ThreeYear makes it back for his camp that starts July 31st. He is very excited, since he’ll get to take a stuffy into the woods and make all kinds of houses and forts. Our oldest son will have his turn in August, where he’ll have a week playing outdoors at camp as well.

As always, we are optimistic for the future. Even if we have a few more low income, high expenses months coming up, I feel confident that we’ll buckle down and save a lot in the fall. It makes me feel good to watch the balances on our last remaining debts slowly decreasing, as our net worth slowly increases.

How did your June look? Did you have any unusually high expenses like us?

6 thoughts on “June Net Worth Update”