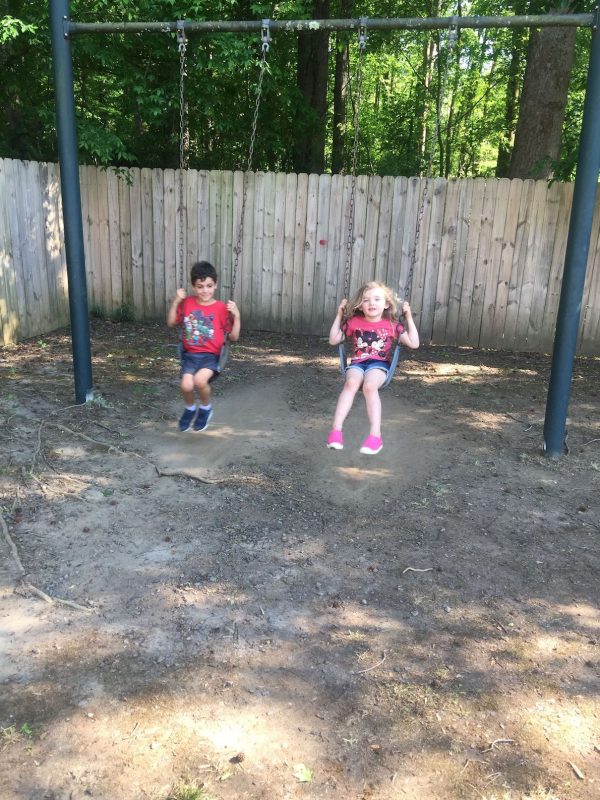 I hope that this post isn’t head-smacker obvious in its conclusions, but I had an epiphany of sorts yesterday at my kids’ swim practice.

First of all, I’m not super frugal but I’m always trying to get better at spending, because it’s my Achilles’s heel, my Kryptonite.

Second of all, I believe very much in a simplified schedule. This year, I don’t have a full-time (or even part-time job), so my schedule has been very bare, on purpose. That’s been nice. We’ve enjoyed a blessedly busy-free schedule for the entire school year. It’s very much in keeping with our location independent lifestyle. We’ve made last-minute decisions to have a beach weekend or travel to see a relative several times, even skipping a day of school if we needed to.

However, this week, I’ve had a taste of what an over-scheduled life might feel like. The kids have only had one activity each for most of the year, but as of two weeks ago, they both tried out for and made swim team. We have practice every evening.

During the day, after I get the kids on the bus, I’ve been running, writing, applying for jobs, and quickly tidying the house. Then, I run off to help my sister with her new baby, so she can work her Etsy business. After that, I drive back home, pick up the boys on the bus, get them changed, take one to swim practice, come home, eat, then take the other to swim practice.

I’ve had one week of this, not an entire school year, like many parents. But already I’m feeling the effects.

Yesterday, I ordered groceries from our grocery service (which continues to be a major, huge, wonderful help in my life that helps me spend less on groceries despite its cost). After putting them away, I realized that I hadn’t taken inventory of the food we currently had in the house. Because our week had been so busy, and we’d eaten out once during the week, we had a lot more food left over than usual.

I’d bought food that we already had and hadn’t even touched, like grapes. There was a bag with several mushed and soggy grapes at the bottom. Since this month I’m challenging myself not to waste food, I was very annoyed.

Not only did I not take inventory, I didn’t make a meal plan. That means I haven’t had a clear idea of what we’re eating each night. So, between swim practices, we’ve eaten leftovers (thank goodness for leftovers!) and candy bars. Yes, that’s right: Little ThreeYear had four Chilean candy bars and a carrot for dinner one night. Mom of the Year, here.

Fail to Plan and Plan to Fail

I do my best at frugality when I have time to plan. In fact, planning is essential to a frugal life. Going to the library and don’t want to buy snacks out? You need to pack a lunch, but that requires thinking ahead and predicting that hunger will occur at approximately midday, requiring food.

Want to spend less on utilities? You need to plan to pull out the box fan and set it up by strategic windows each night in order to push cool air back outside. (As an aside, I don’t think I’ll ever write a post on saving on AC, because since moving to North Carolina, we like it cold and cold, and during the summer, we don’t ever turn the AC off).

Want to give teachers awesome but frugal end-of-the-year gifts? You’ll need to plan ahead and research options, then go pick up your ingredients or supplies and put them together. Running by Dunkin’ Donuts on the last morning of school to buy gift certificates is not the frugal way.

A simple life allows time for thinking and planning. A life that’s stuffed to the gills with activities and things to do doesn’t give you the margins you need to use your resources wisely. I realized this yesterday at the pool because I saw myself doing it this week.

If the kids had asked, I would have been easily swayed to grab snacks at our pool snack bar instead of getting something at home first (thank goodness they didn’t–in the past I’ve been adamant about no snacks at the pool except one ice cream per weekend because I’m not totally heartless).

On Tuesday, when we had to drive clear across the city to go to Camp Orientation for this really cool camp they’re going to later in the summer, we ate out because it was too hard to figure out how to eat dinner between dive practice and driving and the orientation. (By the way check out ways to save on summer camp here).

I’ve been reactive instead of proactive, eating whatever food presents itself in the fridge, packing lunches and doing laundry last minute. While I’d like to plan for the following day, I’ve been too tired at the end of the day to do more than fall into bed.

A Kid’s Take on Under-scheduling

With summer coming up, I’ve been thinking a lot about how under-scheduling also helps my kids adopt a more relaxed, frugal mindset. When we have non-stop things to do, and are hurrying from activity to activity, they become frazzled as well. They start to expect entertainment on a platter. Because of the constant stimulation (and over-stimulation) of too much, when they have nothing to do for an hour they don’t know what to do with themselves. They demand I entertain them and start asking for toys or beg to go out to eat.

Contrast that with periods where we don’t have a lot to do. During the entire school year, they’ve gotten off the bus, come in the door, put away their book bags, gotten a snack, and retreated to their rooms to chill. Both my kids need an hour or so to reset after a long day at school, which is perfect because then I can make dinner in peace.

That gives them lots of time to learn to entertain themselves, and they’ve gotten better at it this year.

Because we’ve been so busy this week, Little ThreeYear has been frustrated that he hasn’t been able to perform his favorite frugal activity. On Tuesday, Mr. ThreeYear got a new power washer which came in a large cardboard box. Little ThreeYear begged to have the box, then disappeared in his room to transform it. But because we had been so busy that afternoon, I cut short his sawing and hacking, and made him go to bed.

On Wednesday, he snuck some extra creating time in and stayed up until past 10pm working on his creation. Last night, he brought the finished spaceship down to us to show off all its cool features, including a coffee pot.

Inevitably, after a week in the summer with little to do, the boys pull out books they’ve never gotten around to reading and start reading them, they create pretend games they play all over the house, and they don’t come down the stairs with “I’m bored…” every thirty minutes.

They get out of the habit of being expected to be entertained, and it’s awesome. They have plenty of time to think, dream, play, and be kids and if the boredom gets unbearable they can go practice their social skills and work on finding someone to play with.

When we’re really busy, though, and then stop and have some downtime, they’re much more likely to beg for electronics or whine of boredom.

Margins for Impromptu Socialization-the Stuff that Fills the Holes

When we’re not over-scheduled, we have time in our lives for impromptu get-togethers, aka, the best stuff of life.

Over Labor Day Weekend, we made no plans. None. I decided not to run (I’m training for a half marathon), Mr. ThreeYear made no definite tennis plans, we made no BBQ plans with anyone.

However, our weekend was filled with us hosting two dinners, us going over to other people’s houses twice, one impromptu pool visit with our neighbors, many impromptu playdates for the boys, and lots of non-scheduled socializing as we walked around, worked on the yard, or went to the pool.

All of that unscheduled social time, for both the adults and the kids, filled us up. It made us feel closer to our neighbors, solidified friendships, and made us incredibly happy to live where we live.

If we’d made plans to have people over and scheduled our long weekend, like we’ve done in the past, I suspect we would have felt more responsibility hanging over our heads for having people over. Because it was so last minute, we just got a bunch of food ready really quickly and didn’t worry about perfection. We did end up going to the grocery store for an extra trip (there’s that frugal planning factor at play again), but we kept things simple, by and large.

I think that having those holes filled for me means I don’t seek out other stimulation elsewhere. After our impromptu weekend, filled with social gatherings, I was ready to be alone and quiet for awhile. My social needs had been filled enough for several weeks.

When you have less planned in your life, you have more time for DIY. And doing it yourself is a hallmark of spending less money. Many people outsource for the simple fact that they don’t have time to cut their own lawns, clean their own houses, or spend several hours figuring out how to fix something. That’s one thing I’ve learned about home improvement projects. They’re inevitably slower and more difficult than I’d like because we don’t know what we’re doing most of the time.

An under-scheduled life gives you:

It’s easy to think you need to fill up your life or your kids’ lives with “enriching” activities, but the truth is that under-scheduling actually gives you more room to tinker, discover, and learn new things. A scheduled, planned activity doesn’t give your brain the same type of room to make connections and figure things out. It doesn’t help kids learn to forge friendships by nervously approaching someone they don’t know at the pool and asking if they want to play.

Once this week is over, we have one more week of school and then it’s summer. The calendar is somewhat filled, but also blessedly empty in spots. We’ll see if next month’s spending decreases because of that.

What’s your take on under-scheduling?