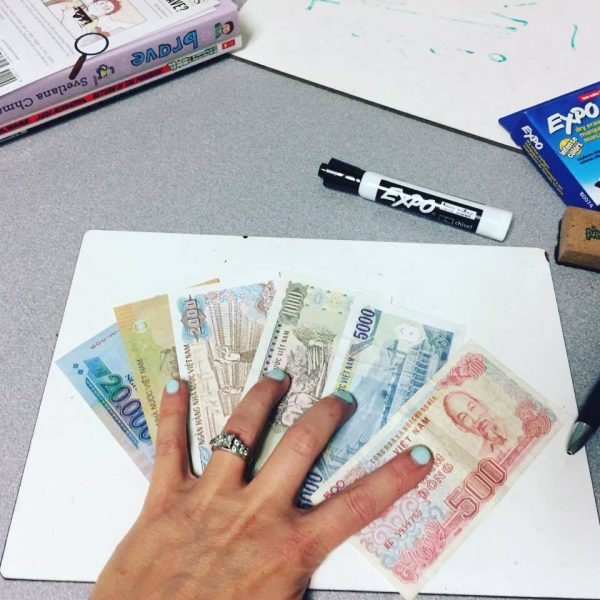 Earlier this year, my family switched to an HSA Health Insurance plan. Unfortunately, I found out after we switched that we’d no longer pay a low $10 or $20 copay for our prescription meds. Instead, we paid upwards of $100 for each of my two boys’ ADHD meds each month.

We suffered through these costs for a few months until one evening, Mr. ThreeYear saw an advertisement for the GoodRX app on TV. “You should look into it,” he prodded me, for maybe the tenth time. “Okay, fine, I’ll download it, but it’s not going to save us anything,” I said. I was convinced that there was no way there could be much of a price differential between our meds, because I’d looked online at our health insurance’s price comparer, and thought I’d found the cheapest pharmacy.

Well, it turns out that I was in for a delightful surprise. In a strange twist of fate that has only happened a couple of times in our marriage (ha), Mr. ThreeYear was right and I was wrong.

I downloaded GoodRx and found out that the local Publix Pharmacy carried our meds for less than HALF the cost. Instead of Little ThreeYear’s meds costing over $150, they now cost $58. I was floored! How could they be so much cheaper? I had our prescriptions transferred and went to the pharmacy, and not only were the medicines cheaper, the service was much better and the pharmacy techs were more knowledgable.

A few weeks later, when we needed antibiotics for strep throat, all four of our prescriptions were $0 at Publix! (That $0 is to be read as “no additional cost” since my father, who abhors the term “free,” occasionally reads this blog).

If Mr. ThreeYear hadn’t pressed me to look into the cheaper option, I would have kept paying more and going to a worse pharmacy, probably for years.

When we got Lucy the dog, I began calling around to find out vet prices. All of the vets I called cost about the same, and charged around $400-$600 to spay young puppies. I dutifully took Lucy to her first check up at the vet, and paid $150 or so. Then, a friend came into town and I mentioned the high cost of a spay to her, and she recommended looking for a Humane Society close by where she thought they’d offer services for cheaper.

Sure enough, I found a local humane society, and they had a “New Puppy Package” that included all immunizations plus spay for only $150.

I wouldn’t have thought of such an option if my friend hadn’t questioned the large expense of a spay.

As you can see from these two examples, I can often get stuck in my spending habits. I accept that costs are fixed and that I’ll have to pay a certain amount for certain goods or services.

However, there are almost always cheaper options available if you start to question prices.

Mr. ThreeYear is very good at this. He grew up in Chile, a third world country, and still doesn’t like to part with his money. He’s constantly looking for creative ways to find deals on goods. This means he’s often scouring Marketplace, Craig’s List, Ebay, or another used goods site for deals. Last weekend he found a giant standing umbrella with solar LED lights for $80.

Because I’m the one who primarily pays the bills, Mr. ThreeYear will often question the price of bills I feel like are “fixed,” such as the water bill, the electricity bill, or insurance.

One of the ways I’ve become “unstuck” in my money thinking is by having him, or other friends, question expenses I consider fixed.

Friends, neighbors, or bloggers often have ideas for ways we can save money that would never have occurred to me. Jim from Route to Retire convinced me a couple of months ago to switch my cell phone plan to Total Wireless from Verizon with this blog post. Not only did I save over $20 per month, my data allowance increased from 1 GB to 6GB! I now pay just over $36 per month, whereas before I was paying close to $60.

We ended up figuring out that our water bill was so high because of when and how much we were watering our grass, something that my sister explained to us. We’ve now changed our watering patterns and have much lower water bills (or know how to control them better).

I’ve learned that who you’re talking to is very important. If you’ve cultivated frugal friends, they’re probably going to be a wealth of information about where to get the best deals. If your friends are used to paying on the higher side for goods and services, they may see these costs as normal and talk you into paying more by convincing you that your costs aren’t too high.

If you feel like you’re paying too much for a good or service, bring it up in conversation (the more random, the better). I’ve gotten lots of good ideas from my Dog Park friends about the best and cheapest local services (many of them have lived in this area for years and have great suggestions).

While it’s a pain to switch insurance companies, I’m willing to trade an hour or so of my life for a $200-$300 savings.

Every year or so, Mr. ThreeYear and I will go through our budget and essentially “start over,” discussing each and every purchase to see if it’s something we really need. I tried my hardest to get him to cut out Amazon Prime this year, since I believe it leads us to way to many impulse buys, but so far, I haven’t won that argument. But we did cut out our monthly Skype plan, and now use a Pay-As-You-Go plan since we realized we didn’t need the monthly plan.

Keep It In Perspective

As a fairly unapologetically not-so-frugal person, I really appreciated this op-ed from The NY Times entitled “Here’s Some Money Advice: Just Buy the Coffee.” Being careful of costs is important and can help you save and invest more.

But, as Mr. ThreeYear and I have learned over the years, we can balance the beautiful and fun things that give life meaning with saving and investing, and still reach our financial goals. We do this buy focusing our spending cuts in housing and transportation, saving our raises, and then spending on the stuff we care about.

We occasionally overpay for goods and services, but that’s okay. We’ve made financial choices over the time that allow us to bounce back from those mistakes, thank heavens.

In other words, we question a lot of recurring costs that we pay for again and again, like cell phones and insurance. But we don’t question every. single. outgoing. cost, because that would make life onerous and hard.

Here are costs we’ve found cheaper options for, or ways to decrease:

Here are costs we don’t shop around on, as the savings would be minimal and/or the effect on our lives onerous:

What are goods or services you’ve saved on? I’d love to hear!

5 thoughts on “Paying Too Much? How to Unstick Your Money Habits”